Its the end of March, the weather is starting to warm up (40F instead of 20F) and its time to get the greenhouse back up and running.

This year I am going to add DWC bins to the system to grow my green leafy vegetables. In order to do this I have to cover the sump tank with a floor and build a table on it where the DWC will sit. There are 3 bins with 8 cut outs each to support 3" net pots. I am starting everything from seed. I am using rock wool as the medium to grow the plants in.…

Beginning of my build for 2105

I have started my build after a long winter of waiting. I have uploaded a few photos of my progress so far.  The first group is of the greenhouse setup and getting the sump tank set.  The second group of photos is the layout of Phase 1.

I will be completing this build in 4 Phases.

My wife and I are taking the commercial plunge. After running a successful backyard hybrid system for a year, we purchased 4 acres and moved. We have 3 quotes for high tunnels 30x100'. There is 2 steel barns on the property located in growing zone 6a. We plan to use half of one of the barns for a fish house and build a double skinned high tunnel behind the barn east to west.

In the event of a power failure, the main concern should be the fish are supplied with air and water circulation and of course feed. Is this correct? Please advise, Thanks to all for being here, Gil Jones

I joined because I am about to begin my first solo design/build. I have seen two systems in operation, and helped build the first as a landscape focal point. Though the effect is nice, and the fish are fun and capable of feeding a few floating beds it is not what I want to design this time.

My friend built a make-shift system in his shed that successfully feeds three flush and fill beds in succession, it is exponentially more productive. I was not around for it's design and…

Thought I would update my status. I have the AP bug really bad. I have been consumed by AP since the first time I looked at a system online. I got excited and started immediately looking at a way to create an AP system in my yard. Well the more I read and the more I got excited the bigger the picture got.

Now Im looking at purchasing 73 acres on the edge of Bankhead Nation Forest in the southern half of Lawrence County Alabama. It is completely surrounded by NF (National… 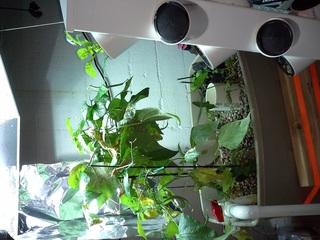 So here it is, the end of February. I still have the same issues with my plants. The main reason why I built this indoor system was so my Tilapia would not freeze to death in my unheated greenhouse. My limited amount of space in my basement forced me…

Hi i am looking for some tilapia fish. I live in central Saskatchewan, Canada and was wondering if anyone on here was from Saskatchewan as well and if so if you have any tilapia you would be willing to sell or traid for.

Just wondering which gives the plants a better grow light?. I see a lot of ppl using cfl lights and watched some youtube videos where others have had great success with led grow lights. What are some of the pros and cons for each one that you have found?

Just wondering which gives the plants a better grow light?. I see a lot of ppl using cfl lights and watched some youtube videos where others have had great success with led grow lights. What are some of the pros and cons for each one that you have found?

I just ran across aquaponics yesterday and Im as excited as a kid in a candy store with a $100 gift card. I can seem to absorb all the information quick enough because my mind is spinning with ideas of how I can create an aquaponics system that will work best for my family and accommodations (I live in a small town).

I am diabetic and desire to eat healthier than I have in the past. Fish and green leafy veggies are at the top of my list. Zucchini, yellow squash, cucumbers,…

Getting ready to set up my 2nd aquaponic system

I have purchased a 100 Gallon rubbermaid stock tank and 5 buckets with net pot lids. I am going to stock the pond with about 10-15 Blue tilapia and be growing tomato plants in my basement.  I am excited about this new system, and I will post further updates.

My growing season ended in October when we had a cold snap and my plants were wiped out. My tilapia were not at a harvestable size yet and the water temperature dropped to 58F. 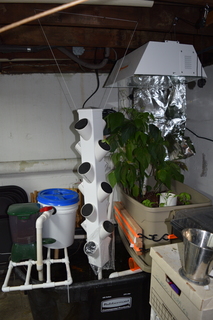 I built a indoor Aquaponics System based around a 100 Gallon Cattle Trough. I had very little space in my basement, so the entire system needed to fit on top of the fish tank.

The Organic Label and Agri-Business

For almost two years I have been researching aquaponics for my soon to retire daughter. The first version of References for Aquaponics for Beginners contained nine pages in August 2013. The November 30, 2014 edition contained over 150 pages.

During the two years, I saw many videos and read many blogs, many helpful, many misleading, and many "facts from experts" that were totally false. Also, there were many people selling  "advice" and…

This last freezzzee in the north just killed my tomatoes that were still having blossoms’.  So I cut them out and getting ready to clean the tanks for the next batch. The fish have gotten big and I want to keep them for breed stock.  I will try to upload some pics soon.  Hang in there were all in this together!!

A few weeks have gone by since my last post. I checked my ammonia and nitrate levels a week ago, and the results were dismal. I had 0ppm nitrate, and 6ppm ammonia. I resolved that my second fish was going to die, because dependent on the pH of my water (which I neglected to check) as low as .1 ppm can be lethal. I suppose I must have around 6ph water, because fish survived the hard week of high ammonia, and is now super healthy! This week, my levels were up to 30ppm nitrate, and 0ppm…

easy rock washing for a change

i found a easier way to wash rocks now that i have this new gorilla cart. its angled back and ability to dump makes it easy to "slurry" nasty rocks into clean ones , i have a stiff wand on hose and i just rake them out and then slowly rock them back and forth and dump the trash off and they are clean. works great! plus i have help from aquaponics tolling pitbull terrier number 25 lol. rock washing will always be work but this is easiest i ever had

I soon began a series of modifications to new Aquaponic garden. Shortly after constructing the initial build, I moved, and had a much bigger window. So, I offset the fish tank, and built four more columns for the WindowFarm following the DIY instructions found on the WindowFarm website. After numerous trial and error attempts, I got the system working with only the occasional leak.
Eventually, it became clear that the sun penetrating my window would not be sufficient to grow plants to…