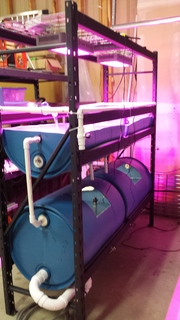 I finally have the kinks and leaks worked out and we are ready to grow our first plants. I focused on getting the system live and haven't added any of the controlling and monitoring electronics yet.

I designed my system around inexpensive industrial shelving. Its footprint is…

Why my aquaponic tomatoes leaves dying?

I would love for any one help me on this? Why my tomatoes leaves Turing brown. Fish is healthy. Water is circulating fine

This is my first blog of hopefully many more to come. I'm in the process of designing a DIY system in my garage out of industrial shelves and 55-gallon plastic barrels. My initial goal was to create a sustainable garden that can feed my family year round, but, it has become much more than that. The more people I talk to the more I discover that Aquaponics may just become the next food revolution.

I own my own Embedded Product Development business. As I look for solutions to monitor,…

I have had my system operating over a year.  I get a lot of growth and very little production out of my crops.  My fish are doing fine, I feed them once a day.  My PH is usually between 6.8 and 7.2.  My Nitrates are between 80 and 100.  Nitrites and Ammonia are nil.  I add aqua Essentials on a regular basis, usually once a month.  I have three grow beds that use the bell siphon.  My system is in my basement with adequate ventilation and I use a HPS light source on a traveling…

Added my fish to my system yesterday

Well I finally added my blue tilapia to my system, I ordered 30 to start with 29 made it through the shipping process and 1 died just after being added to the system.  It was one that I noticed wasn't doing so well during the acclamation process.  Water temp is a steady 88 degrees Fahrenheit and they seem to be doing well for now.  I did notice a bit more water evaporation then I was expecting.  I will have to deal with that later.  I will update this blog as time goes by.

I have an artificial pond/waterfall that does not currently have fish but does have algae.  I would like to install a red worm filtration bed to remove the organic buildup in the pond and, if possible run some of the water through strawberry towers and thereby reduce the nutrient content.  Is it possible, in this situation, to grow plants without introducing fish into the pond?  There is a lot of organic build-up from leaf loading so I could feed the red worms for quite some time.…

Bees in the greenhouse?

Is anyone keeping a beehive in their greenhouse?

I am looking into starting an Aquaponic farm in Arkansas, anyone else out there doing so? And if so what area are you in?

I've been wanting to do this for years, but location, resources, time and simply not really knowing what I'm doing has prevented me from starting my aquaponics system.

I have the hoophouse frame and cover on, the IBC and filter barrels painted and the first grow bed framed up.

Learning as I go has to be the mode, as I'm sure it was with everyone when starting out.  I just have a hard time because I can't afford to mess things up really…

Hello everybody. I have started rainbow trout farming. I would like to set up an aquapoincs system for trout effluent treatment. I will be grateful if you kindly let me know what kind of vegetables perfum well in cold water. Thanks in advance.

I am new to your community and live in Vermont.  No system yet.  I will probably take one of the cool courses offered soon.  Are any of you New Englanders?  I would love to visit you and see what you are up to.

my indoor system is 2 months old. All test numbers are in range. Cucumber plants grew huge and strong, 3 varieties, trellised and lots of light. Lots of flowers, became little cucumbers. After reaching 1 inch in length, they each withered and died, from bottom of vine, all the way up to latest cukes. Removed all vines, and planted 12 more plants in other grow bed, other fish tank. And ideas why the huge loss? Thx.

For those with outdoor systems, how do you combat drops in your pH from rain. Live in Alabama, the pH of rain here is about 4.6. Got several inches of rain in a few days time. Has been a real battle. Have put oyster shell in a stocking, but haven't noticed a difference.

4/29/2015 - I have planted my first seeds in the connstant flow bed today. Included are spinach, lettuce, calentro, savory, and a couple of other things. The beds are all plumbed and I am cycling the water. The fish tank is plumbed; however, I haven't gotten the swirl filter plumbed in yet. I am having trouble finding the right size bulkhead fittings for the holes in the top of the 30 gallon barrel.

Well, deeper pockets opened up and I am allowed to get a solar system to operate the water and air pumps, as well as the potential heater needed to keep the water pleasant in the winter time. It means more research, but who minds that?

I've decided to leave out the swirl filter unless the GB isn't sufficient for filtering solids. I will still build it, just to prove I can, but I doubt it will even be an issue with worms in the medium.

ST has been rethought, and I will be using…

2015-04-04 I am changing the form of this blog to show the present state of my garden which is mostly Aquaponic.