Jason,
I live in Monmouth Or. I appreciate your hard work and advancement in the area of aquaponics. I am interested in what you guys are doing at st Johns I am going to try to come out and support you on the 2nd.

I am interested in your project as well but I do not feel like your video or project description gave much meat to how your going to accomplish this and what end product and cost will be.

A clear path of aquaponics knowledge

I belong to about a half dozen forums on aquaponics. I am new, only a year into aquaponics, but have spent a lot of time researching and communicating with people more knowledgeable than I am.
It seems despite all the info that could allow most people, me included to go straight to doing aquaponics the right way, there is an inherent human quality that seems to want to do it from scratch and to find new ways.
I was just reading one of many posts from "newbie aquapons" that are asking… Continue

We have taken such great care of our fish and plants so far however, I just realized today that to solve a snail and slug problem in our grow bed I used Corry's® Slug & Snail Pellets which I now realize is quite toxic and may kill my fish.

I thought it was an organic product and I should have read the label !

I have been using this product for years around the property to take care of slugs and snails without
so much as a second thought.…

Sounds like a strange name doesn't it?  Actually it was a really big food thing combined with a sustainability event.  We were given the honor of having a booth at this event.  I t cost us $30.00 but that is because we were friends of the people who put it on.  We took 4 of our small systems and a solar generator.  We almost couldn't go because we had no source of electricity.  God at the last minute reminded me that my friend had a solar generator with a battery.  I knew she didn't like to…

To Be or Not To Be...Organic

Organic certification. It is a hot topic in the aquaponics world. Sure being certified organic has its benefits, namely commanding a higher price and the ability to use that golden word. But really, how essential and valuable is it? Is charging a higher price really worth it? Or are we as farmers just playing the bureaucratic game and feeding the machine? I think as an industry we really need to assess the value of organic certification.

Those waving the organic flag and boasting the…

Each One, Teach One! 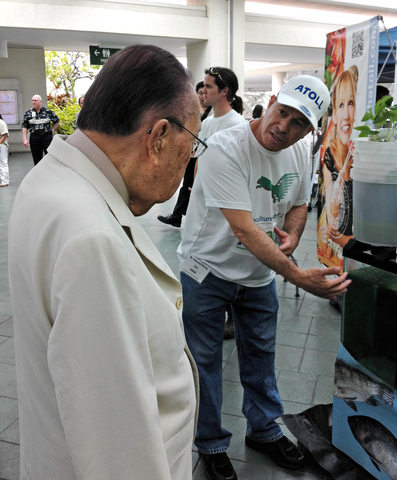 As I've learned about aquaculture and aquaponics over the past 3 years-- I sometimes wished I could go back 40 years and re-design how I spent that time.  Knowing what I know now--- I definitely would have chosen a different career. But.. we can never go back.. big sigh here.

Becoming an evangelist for aquaponics is not hard to do, but everyone needs to do…

I finally got my barrel-ponics up and running. It's on the 3rd day of cycling. 10 gold fish, transplanted tomato plant, and seeds.

Update from Marcia & Bob in Miami ...

Whew it's HOT here! After all it is Miami Florida.

The fish and plants are still growing like crazy! I have included a couple of pix in this posting for your review.

We are wondering when we might see our fish begin to breed. From what i have been reading and hearing from fellow aquapons, it should be starting any time now. We have been clued into what we should be looking for, by others in their behavior.

Agro Tourism on Maui in Hawaii

Bill Greenleaf of the Maui chapter of Hawaii Farmers Union United and owner of Greenleaf Farms, spoke with NPR National Public Radio this morning about changes in agro-tourism laws that could allow for more tourist to have farm stays in Maui.
I'm thinking Aquaponics operations that can supplement their…

Any other member in Bay Area, CA?

Hi,  I am a completely new to this site.  I almost finished reading the book by Sylvia and can not wait to start to build up and start my own system.  I really hope that I can get a chance to see the "real" system.  I live in Fremont in Bay Area, hope that I can find another member nearby so that we can share the experience.

Moved my Channel Catfish and the rest of the white tilapia to my jacuzzi aquaponics system to join more tilapia and some Chinese Catfish. They all seem to have their favorite hangouts in the deep and among the potted taro plants.

What I learned from the Storm.

I am not a prepper. I just want to be clear that I do have some hope and faith in a All-Encompassing force that drives everything and will help us, especially in times of catastrophe. However, I have always felt that we each have to do our part, our effort, when we see obvious signs that preparation is necessary in case of various scenarios that can and do occur. An obvious example comes to mind. We recently had a "hurricane-like" storm with winds in excess to 80 mph clobber our neighborhood…

Getting into aquaponics was and is a learning experience...

As time goes on we have discovered which crops work for us and which ones to avoid in the future. For us it seems that our lava rock and stalite rock combo grow bed, in the future, will be primarily an herb garden.

I believe we will attempt a raft system for our next crops like lettuce, kale, spinach, etc.

Any newbie must approach aquaponics as a learning experience. It's hard work and above all ... a lot of fun.

If anyone is interested we have put together some basic guides to help people who are looking at starting their own aquaponics systems.  We are writing more of them every week, but the first few are now up and running.

A lot of this information is garnered from various sources from all over the web, and from various forums and blogs - including this one of course, but we hoped that drawing those sources together into single easy-to-read guides might be helpful.…

Almost back to normal-new pump plumbed in

Just plumbed in the 1 HP pool pump , and after diddling with it for a couple of days, things are back to semi normal. I'm way overpumped for the system I have right now, but will be adding at least one more node of 4" PVC tubes ( 3 , stacked and gravity dropping) set along the outside wall of the greenhouse. These will dump into a 10' long 1' wide gravel bed, then back into the fish tank on the west outside of the greenhouse.

Only lost a few plants that I can replace with rooted…

Our media beds have been cranking out peppers, Heirloom tomatoes, Watermelon Radishs, Cucumbers and striped, white and Ichiban eggplant are on the way.  We love our media beds but the problem is that our delectable crops have lured in some unwelcome guests.  Some little critter or critters have discovered that we had huge, beautiful colored Bell peppers there and each night decided to help themselves to some.  To our dismay, the long awaited, over 1/2lb each yellow and red Bells were nothing…

The fire is still burning but they have it partially contained and some folks are going to get to be home again.

I forgot in all the mess to put the mosquito dunk in... the water is just crawling with larvae. I hope to have gotten it in there in time to avoid mosquito hell.

I have a small water lilly in p2 now and a bag of barley straw. Tomorrow I have a busy day, but Wednesday I plan on making the first of the rafts.

I plan on using 1/2" gravel for the first pots…

Update on our system and what's been happening ....

The fish are growing like crazy.
The smallest fingerlings are now the size of the biggest ones we brought home.

Ever since removing the filter from our pump the plants have exploded and are growing nicely. We did however abandon the carrots, lettuce and some others slow performers and replaced them with seasonal stuff that has taken off.

Olomana Gardens, what we do different?

Olomana Gardens  take on Aquaponics:
We practice  Vermi-Aero-Aqua-Ponics.
Sure,  we have the fish and the plants. We do the "total recovery"....keep the fish solids in the system, not flushing them out. We run parallel feed of fish solid water (from fish tank) to the bio-filter beds. Such that if I have three bio-filter beds, all three get an even distribution of the "dirty water".  Then we have Indian Blue worms to eat the fish solids. We move the water input each…
Continue