Our media beds have been cranking out peppers, Heirloom tomatoes, Watermelon Radishs, Cucumbers and striped, white and Ichiban eggplant are on the way.  We love our media beds but the problem is that our delectable crops have lured in some unwelcome guests.  Some little critter or critters have discovered that we had huge, beautiful colored Bell peppers there and each night decided to help themselves to some.  To our dismay, the long awaited, over 1/2lb each yellow and red Bells were nothing more than pepper tops hanging on stems and some messy remnants on the 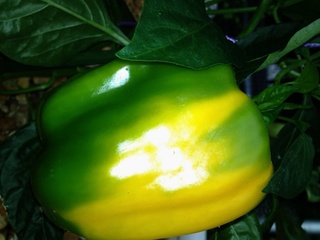 gravel below every morning.  As soon as our intruder finished off all the colored peppers, they moved on to the green ones and even began helping themselves to some nice, big heirlooms but they were wiping out our pepper crop!

We tried the conventional solutions available at the local hardware store, sound deterrents that emit a noise that is supposed to repel small rodents, live traps, and were considering installing a sensitive flood light that would startle the critter as it approached the bed, but being fans are always running, the constant plant movement would not allow it to work.  Even our screened and mesh enclosure was no barrier as they were just chewing their way through.  Then one day Tonya arrived home with bags from our local Tractor Supply and pulled out rolls of wire and a hotwire box.  She spent the rest of the day stringing it up and pruning up the plants and fired it up(well plugged it in).  The next morning not a pepper was touched and a week later, all is still calm.

We always talk about how being an AP farmer requires being innovative, creative and nimble. 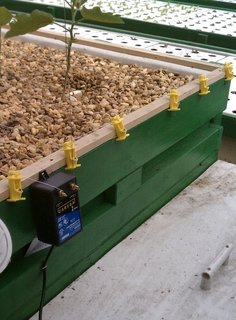 Hmmm Earl, I think you might have to get a box that delivers a bigger shock!  ;-)

Way to think out of the box. Now do you have any idea how to keep the two legged weasel’s out, I have had more than my share of having to deal with them they can be a real Rascle

I love the innovation!! Joe

Thanks Steve.   It was quite the challenge to come up with something effective as we didn't want to kill anything but  certainly needed to protect our crops and our bio-security.  We figure after a little while we can turn it off especially as we haven't seen any activity since installing it.  Now if it only worked on aphids!

We have had squirrels do that...eat the blossoms off flowering plants, and chew into the screened greenhouse and eat tomatos and whatnot.......congrats on the solution!!