Another great idea on how to recycle that dry, old Christmas tree. Drag it to the water's edge and create a fish habitat:

The final week of 2011 is here and it is almost time to start singing Auld Lang Syne.  What started out as a Scottish poem in 1788 has become the anthem of New Years Eve.   Ever wondered what the heck we sing about every year at midnight of December 31st?  Well, apparently the song begins by asking whether or not old times should be forgotten and is also a reminder to remember long-standing and important friendships.  At Green Acre, we certainly do not want to forget old times and definitely…


I set out to design a small basement aquaponics system following the
recommendations in Sylvia's book, as well as some of my own ideas and
advice from friends.

First I jotted down a bill of materials for the larger parts and things
I think are needed. I've included links to the sources from which I
purchased each item. Once I have these in hand and begin assembly I
will post additional items, alterations, and… Continue

One more step – Part two ~ Sorry, lots of words and no pics (at this time)

Good news! Merry X-mass all! On Christmas Eve, I received a call that lasted about four hours and in conclusion I got a wonderful X-Mass present in the form of a committed Angel Investor. Phase one will begin as soon as I finish negotiating and sign an agreement with the landlord, (hopefully within the next month).

Merry Christmas and a Prospers New Year to All The Aquapons

I guess it is about time for some Hallelujahs and Thank You Jesus for this year that has almost passed.  There is so much to be thankful for.  First, I have a crew of 4 wonderful hard working WWOOFers living here.  They will stay at least 3 months which makes it really good.  You don't have to constantly retrain.  Tales is from Brazil and he is a biologist and loves the aquaponics.  I can trust him to take care of the fish ,  His friend Sandro is from Brazil also.  He has cleared all the…

I originally posted this article on my personal food blog, but wanted to share it here for anyone that is interested.

I have enjoyed listening to country music since the days of eight track tapes, a.m. radio's, and first generation Sony Walkman.  Tammy Wynette, George Jones, and Tom T. Hall were regulars on Kansas City's 61 Country station that we listened to all day long whether in…

One possible grow medium that might be considered somewhat comparable to Hydroton (expanded clay pebbles imported into the USA from Germany) is Buildex, an expanded shale product produced at a quarry located between St. Joseph, Mo. and Kansas City, which is only about 150 miles south of my location near Omaha, Ne.  The company sent me a 10 pound sample of the material to test. Today, after several weeks of letting a handful of the material sit in pH neutral snow melt (see attached photos), I…

How Designing Smarter Farmers' Markets Will Help Our Cities Survive

I thought that this might be of interest to commercial aquaponics growers in particular... but anyone with an interest in urban sustainability really:

Daniel Carmody, President of the Eastern Market in Detroit, is a passionate speaker, and entranced many of us attending the…

Here is an idea that I originally saw in on one Chris Smiths posts (Chris seems to be full of practical and useful ideas, thanks Chris)...Originally I wasn't going to sprout my seeds in a hydroton only media, but after trying  this, this past summer with 50 or 60 different plants (from various leafy green types, to tomatoes and peppers), I saw that it works great. Every seed I planted sprouted as good or even better than in all the different cocco coir, vermiculite, perlite, worm casting,…

As the seasons change so do our plants. Lets be honest everything in the universe has its time to run its course for change. Everything i have learned about this new idea of agriculture that is Aquaponics up to this point has surely been riveting. Yet, really no direct source of information could be found throughout the internet, one should only hope to see whether this website pulls all the strings together. Seemingly so for the time being. Though, all the effort certainly was worth…

Is Integrating Media Beds with DWC Worth It?

Integrating a media bed with a DWC or raft type system has a multitude of benefits.  One mustn’t only consider the increased growing diversity, but the additional nutrient availability, the addition of a tremendous biofilter, the reduction of labor from not removing solids and the benefit of utilizing those solids.  Of course if this is to be considered for a commercial application, the additional cost of…

I'm just kinda throwing this out there...in the hope that it might be of some use to someone, somewhere...

What we're looking at is a 4'x8'x32" high seedling table that I built in the greenhouse. 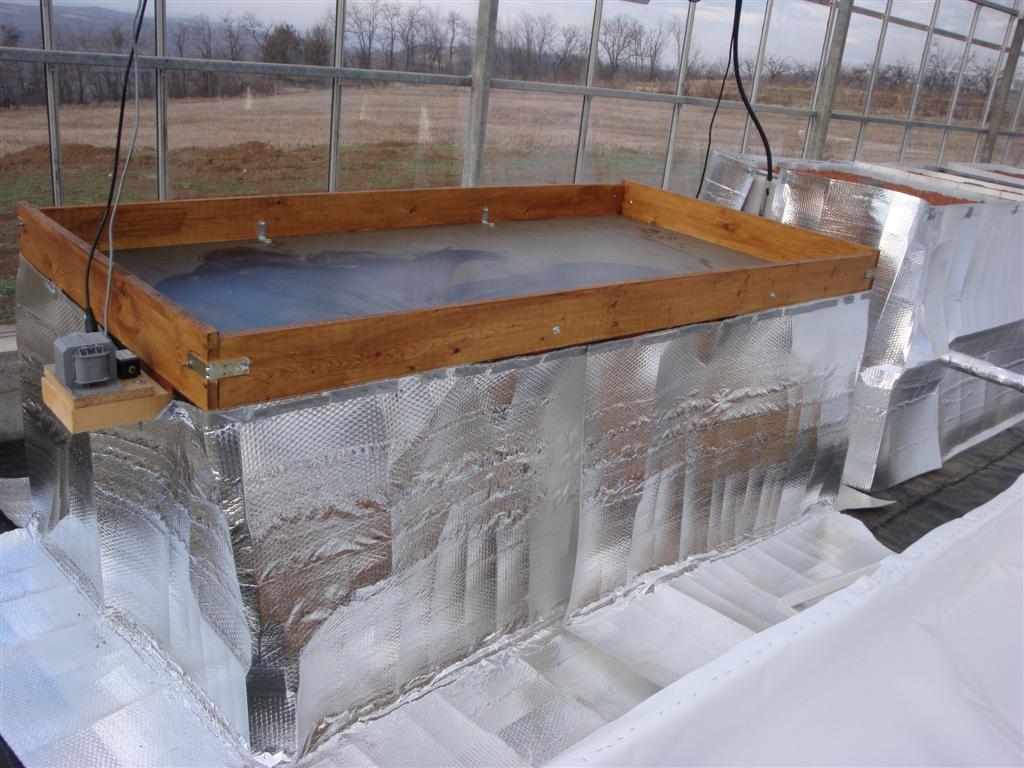 I've velcro-ed bubble foil wrap around the table so that I can open and close and get in there with relative ease.…

I am sure that most people already know about this method of composting and fish-food produciton, but I came across this decent video of how to make a DIY Black Soldier Fly composter.  The larvae from these systems consume a huge amount (really huge!) of waste food (including meat) and turn it into:

1.  Much less waste (and a kind of fertiliser liquid gold)

2.  Big fat soldier fly grubs that are about 60% protein and fantastic free fish…

Maybe dreams really do come true. I’m only in initial negotiations at this time (as of yesterday), and there will be a thousand and one hurdles to jump before I can actually claim the existence of my concept institute, “Ma’s Greensmart Institute”, but it finally has a glimmer of hope.

It seems that both ladies, Fate and Destiny have kissed my cheeks. My new farm will be located in the same village, no more than a quarter mile from my experimental garden. It is a fifty-acre…

This is the first in my new Green Acre Organics blog series at http://www.greenacreorganics.biz/blog/  However, as I was posting it here, it occurred to me that I missed a huge thank you.  I am incredibly grateful for the folks and friends I have met and made here.  There are those that keep me thinking and questioning like Kobus, Rupert and Raychel and those that almost always have something kind and supportive to say like Sahib or there…

We knew this winter would be a learning experiment and we're definitely learning a lot! Made it through last nights temps of 5 degrees - got down to 16 in the greenhouse but other than a couple of basil plants that bit the dust everything else came through with flying colors. We cover the the rafts and media beds with row cover material at night which seems to help immensely. Yesterday we hustled and insulated one fish tank with foil bubble insulation and installed 3 - 300 watt heaters ----…