I started this about 6 months ago, because I stumbled across DIY aquaponics You Tubes, while looking for a way to stop having to buy filter media for my 2 fish tanks and Koi pond in my Living room. This started an obsession that has led me down a path of learning and applying all sorts of methods and ideas to use on my 1st aquaponics system. I use a host of recycled materials including a shampoo bottle, empty fishfood bottles, rolled up monster can( used as a pipe for a bell syphon) the box the shop light came in, as a gutter lined with window plastic, (filters i had already made -peanut butter jar, coffee cans), scrap foam from a manufacturing plant, just to name a few. i now have a sucsessful colony of red worms, even the snails have moved into the trays and are multiplying :) cuttings from plants grow like they were never cut from the mother plant. i recently upgraded the system adding several new trays, to my surprise the snails moved into the new trays on thier own and are growing well. it seems to be a fool proof system. My 19 year old cichlid even seems happier since i tied the whole system together, 2 fish tanks and a koi pond feeding the grow trays then to "Mr Ugly" my reactor draining into the koi pond, used as the sump tank for the system.
I used several methods i learned and I invented a syphon overflow to feed the trickle lines to the trays. a water bridge connects the 2 fishtanks, a pump in the koi pond fills a tray above 1 tank and a syphon overflow exits the other fishtank, feeding the trays, then drain into Mr Ugly, wich drains into the koi pond. I have a flush fill bell syphon system on several trays and the 4 big trays use a flood overflow, i periodicly pull a scrap piece of pipe out to flush the systemand replace like a flush fill. ( about 4 to 6 times a day ). my ph has managed to stay in range by itself, it changes after adding rainwater, but the next day it is normal again. I have not lost a fish for over 2 years! except the new feeder fish i bought that were sick already. my goldfish mixed with the koi are feeder fish the cichlid did not eat. i have a few rosies i am starting in the other fishtank, i was upset that 8 out of the 10 i got died within a week later, (this is the supliers fault not mine, as all the tanks are tied together and no adverse effects on other fish or plants) scrap foam cut into about 1 inch squares are in Mr Ugly as biological media as well as some filter floss. i have pepsi can and spice bottle with holes drilled in them as a drain cap for the pipes that exit the reactor. I tried buying "organic Herbs" to grow they were dead when i bought them as well only the basil survived in the trays. I cut clippings from my bay leaf plant and they grew like they never left the original plant. i have had some trouble getting the flow rates to work the bell syphon right, as well as adjusting the water level of 2 tanks across the room from each other. about 12 feet away the water bridge works great although it collects air i have to runa seperate pump to constantly suck the water n air out so it will keep working right, but i had a smaller pump already so i used it there. the fountain pump i got at rural king is great for only $27 it is made for a 5 foot fountain but works incredibly well to feed both the 1st tank and the isolated tray. wow I am excited to share this look above i have writtten a book just to say i like this group, Thank You for accepting me and here is where I am at in the NooB stage always learning and applying new methods as I can. Thank God I am single and own my own trailer ! 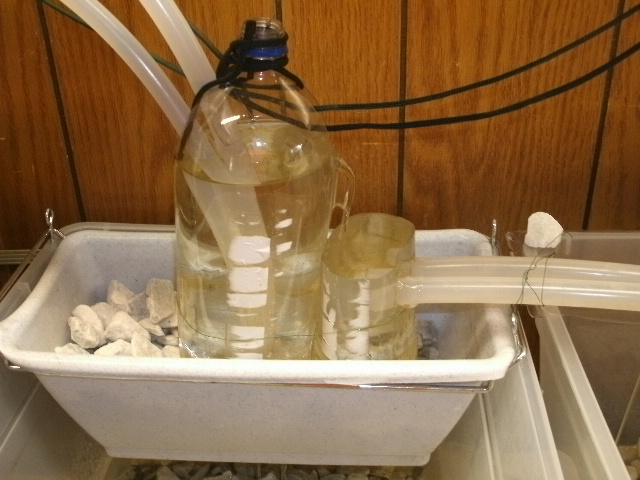 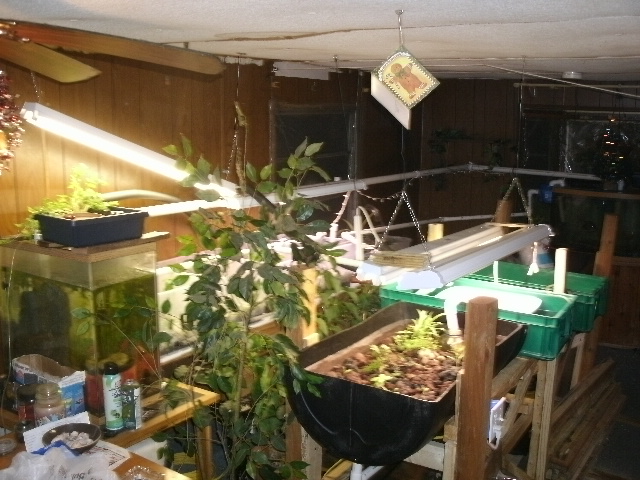 I wanted to show some pics of my recent upgrade. I have a living room full of life and happy fish ! 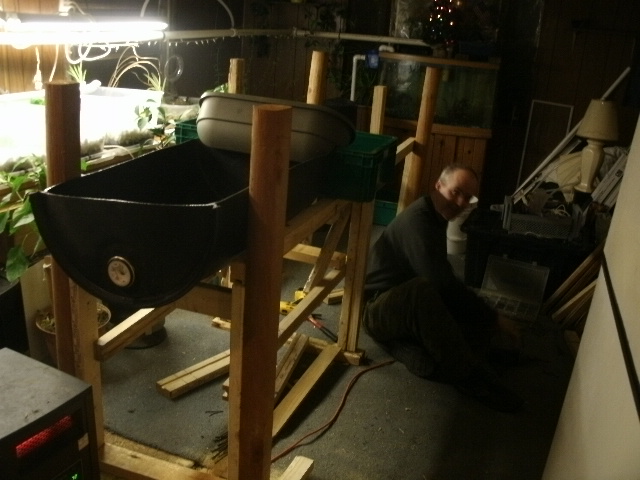 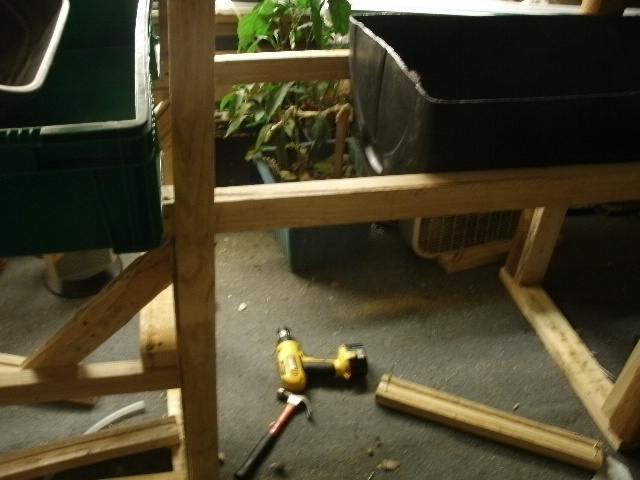 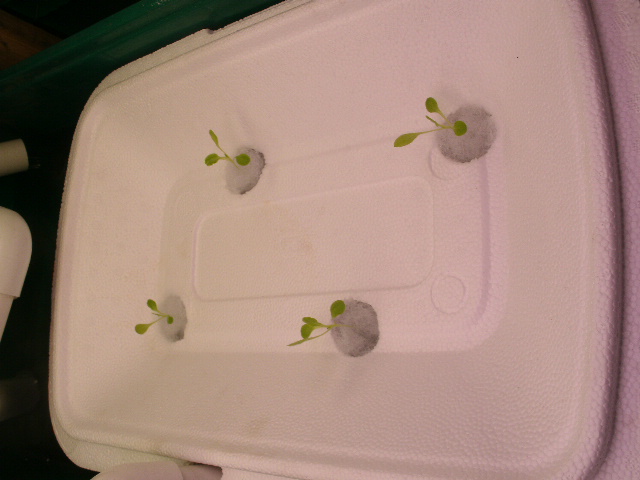 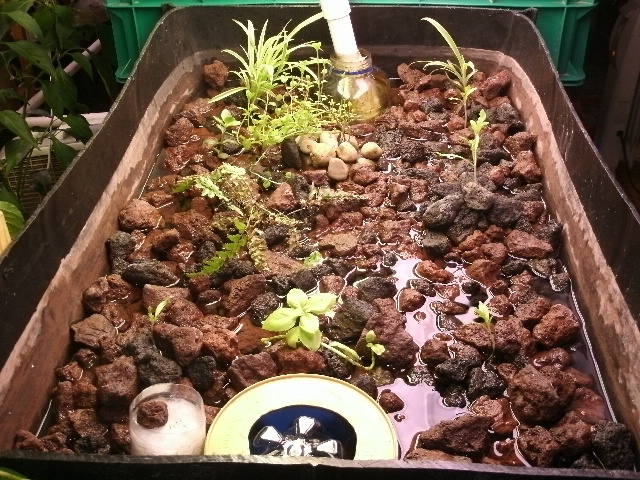 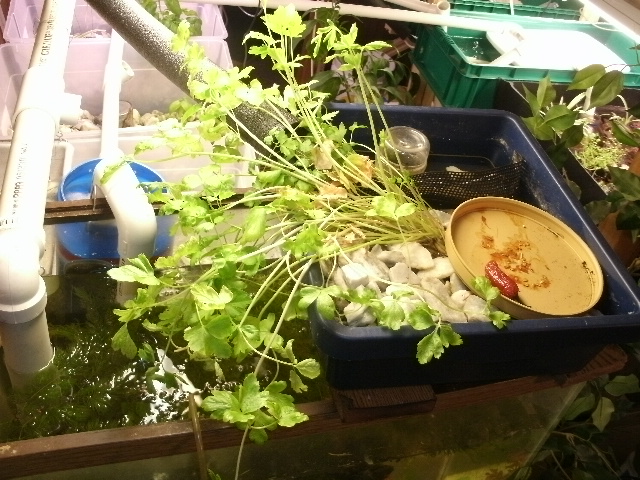 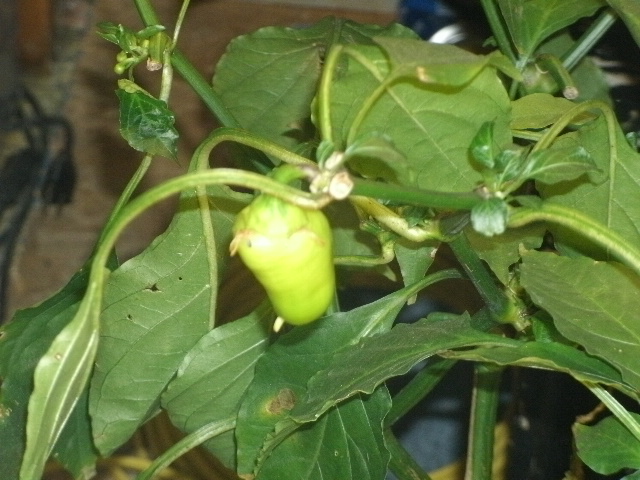 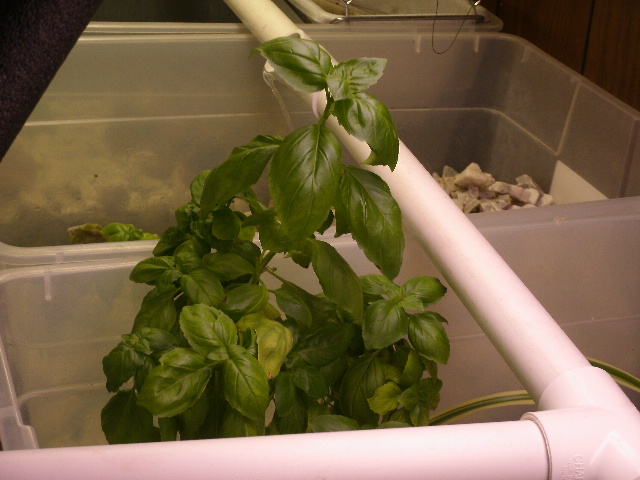 Very cool! Kudos Chris, sounds like you've been bitten by the AP bug

I really like the siphon-water level- overflow idea. Seems smart and simple.

Today I am very pleased to announce the results of a debate I have been having with the furniture in My living room. The furniture has been removed !, and a new grow bed is in it's place ! LOL tonite i planted my emerald oak lettuce in My 1st floating raft system. I will give more details when i take and post the pics. but overall I have roma tomatoes, mint, Jade, spider plant, and a poor fern in my 55 gal. cut in 1/2 barrel grow bed. This is filled with red and black lava rock. I bought a organic roma tomatoe at the grocery store and dried the seeds on a  tray. (recycled: coffee can lid) i put the seeds in a  cup (recycled: water bottle bottom cut in slots to allow water flow) with poly fiber then made a thin blanket with more poly fiber ( pillow stuffing- hypo alergenic 100% poly fiber) to my amazement after only 4 days the seeds popped out of thier shell on christmas eve ! i started the lettuce seeds in the same cup. same result 4 days and POP! the cup is sitting in the new grow bed and gets about 1" of water in bottom each flush n fill of barrel.

The above picture is a syphon overflow, that fills adjacent bottle, and the tubes trickle into 2 other trays. The overflow drips into the tray it is on, and the last of the 4 trays gets all the water from these 3 trays as it travels to a drain in the 4th tray. if electricity goes off the syphon stops when the fish tank level is >= than the height of the hole in the bigger bottle. the syphon is never lost because the water level is higher than the ends of the tubes. So if the electric goes out and back on awhile later, as soon as the pump raises the water level in the fish tank the syphon starts pulling again without me doing anything to it. I adjust the water level of the  fish tanks with this. the height the water overflows from the bottle = the water level of the tanks. to do this properly it should be in a couple pipes with a "T" fitting to direct the water as desired. My system has a very bad apearance, but it is a a series of trial and error experiments. At this point everything has been running for about 3 weeks with the new upgrade and syphon overflow water level control. I did not want to drill a hole in my fish tanks! wich is what all the DIY videos that i found tell you to do. NOTE: tempered glass will not allow you to drill it without risk of it shattering. You can use polarized lens sunglasses to see if your glass is tempered, it will have black marks in it while looking through the glasses. You can test your glasses by looking at your rear windows of a car. if you see the black marks on the auto glass then you will see it in your fish tank glass if i is tempered. becausse my system does not have a nice look to it yet, I am afraid that people dont realize the amount of research and thought that went into it. This system suppots life and uses NO chemicals, and i use recycled materials where ever possible.

Hope I am making a contribution to inspiring or helping others, as i have learned alot from others sharing freely, and wish to pass it on.

Good Growing to Ya :)