Here's another 'farm raid'....What would our founding Fathers do with these 'officals' ? 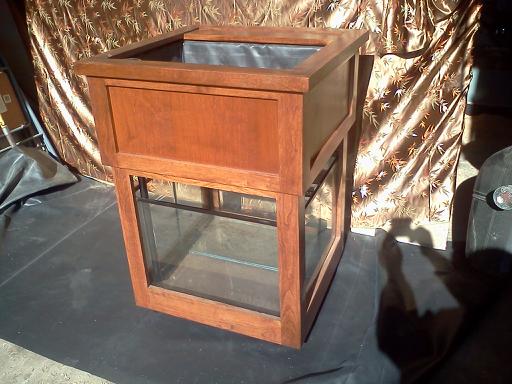 I just about have the micro-unit complete. It still needs to be tested, add the light support and light, pumps etc. I have already found several things to change aesthitically and functionally.  There will be half-panels on the sides and an opaque or textured glass divider to hide the sump. Fish tank will be removable unit. I will add a base molding to widen the appearance…

Whew!  What a weekend. Dismantled old steel storage shed in backyard that was old when we moved here in 1994.  Disposed of it and some other junk at fall clean-up days here in Papillion.  Cut shelf legs and painted first coat of Rustoleum on shelve that will position grow bed above sump tank. The one badly rusted shelf just happen to be where I need to cut out the metal for the siphon outlet to drain into the sump.. convenient!

I bought my three Rubber Maid tanks Friday ($238) and began looking for plumbing parts. Also cleaned the tanks today and moved them into position in basement.  Have old steel storage rack that I am going to modify to put the grow bed above the sump tank.

I am not surprised at how many people have never heard about "Aquaponics."  Up until about a year ago, I was running on a nearly parallel path until I decided to look online and see if anyone else was doing something like this. As I mentioned before, many of you have done much of the leg work and I am now catching up to speed.  But I am surprised at the wariness and stigma that many have of hydroponics, therefore, aquaponics by association. So I am doing a little project to see if I…

“One of the penalties of an ecological education is that one lives alone in a world of wounds. Much of the damage inflicted on land is quite invisible to laymen. An ecologist must either harden his shell and make believe that the consequences of science are none of his business, or he must be the doctor who sees the marks of death in a community that believes itself well and does not want to be told otherwise.”
― Aldo… 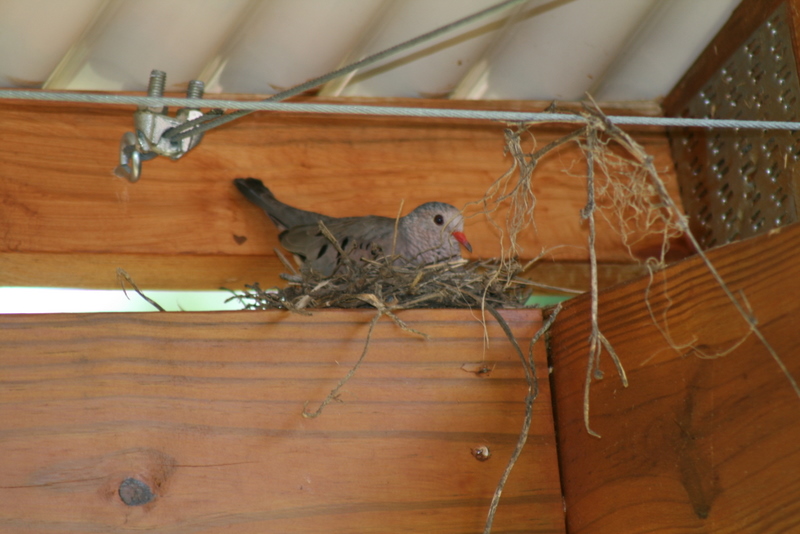 We build a deck to enjoy our aquaponic garden and treat the family someone else have the same idea, can i call this bird a beneficial, My wife is scare that one day she may find an alligator. Nature at it best!!!

“I’d put my money on solar energy…I hope we don’t have to wait until oil and coal run out before we tackle that.”

Now found local sources for most of the parts I need to start building the system, so it's starting to get serious now. Will start by buying the Rubbermaid Ag tanks: one 100 gal, two 50 gal... with option to add 2nd grow bed in future.  I'll keep you all posted.

It has been a very interesting week.  Meeting people, sharing ideas, and finding the scope of a successful business model.  Meeting and talking with Carey Ma generated many ideas in developing marketable products for this economy.  Talking with a potential client has developed new ideas for marketing and visibility that I hadn't explored.  Showing an engineer friend my steam engine has invigorated my plans for reproduction and acquired his professional help.  Not a great deal of progress on…

My pick for a commercial fruiting plant in aquaponics: The passion fruit

Most people interested in commercial aquaponics invariably start looking at potential yields of different crops and then, after a thorough literature search, will discover that there is very little available in terms of potential yields of larger crops.  Stuff like basil, lettuce, tomatoes and cucumbers etc. seem to be written about the most.

With the advent of what I consider to be the most likely design for my own use in a commercial environment, namely gravel beds and…

This is a very exciting time for us at Green Acre Organics.  As is typical when students or apprentices make their own way and expand upon their body of learning and knowledge, Tonya and I at Green Acre have moved on from our affiliation with Friendly Aquaponics.   We appreciate the building block our teachers have provided us, however our separation proves to be a necessary next step in our aquaponic evolution.  This evolution…
Continue

Hello, I am new to this forum and to our future vermi- supported, dietary fish supply.

I am new to hydroponics and aquaponics. I've supervised drilling of six water wells and designed/ built various water storage and delivery systems in the 60psi/ 60gpm range. I have also built fountains of many kinds. The koi ponds I have built used about 2 yards of 3/4" crushed gravel as a biofilter, as well as a sand filter. The gravel is removed, washed, and replaced annually at considerable effort.(which I am no longer involved with!) I am very interested in the incorporation of…

Hello everyone my name is Jacob and I am a highschool student interested in aquaponics. Last year I wrote a grant to help start-up my aquaponics system. I am now going to start the system next week. I am liking the site here for it offers really great information from people whom have working aquapinic systems.

I found Dinoflagellate & Coral work together to fix nitrogen in water for plants.  However, it live mostly in salt water conditions.  Cyanobacteria is one of the first bacteria to fix nitrogen, but it needs at least three things for it to grow, decay of organic material, bicarbonates in the water and light.  If we wanted to reduce the number of fish in our tanks, it is possible to have the fish eat some of the Cyanobacteria (its close relative…

These floating equipment of my own development, and manufacturing sales in Taiwan10 years 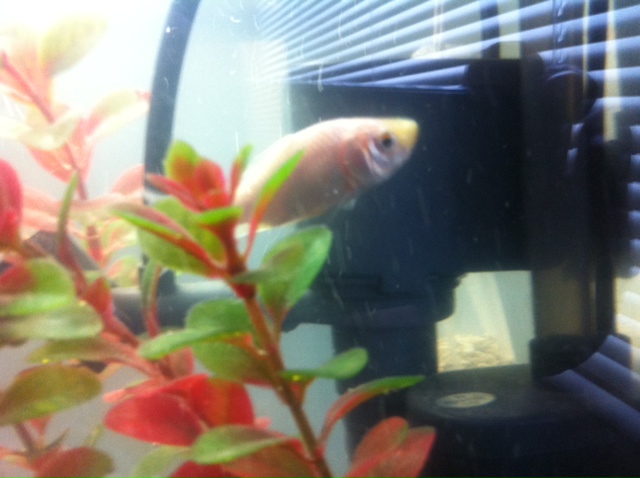 Broccoli and cauliflower are starting to take off with this fall weather after languishing under a source of nutrients from goldfish only. I have a 2lb bass in the fish-tank now and I've moved the goldfish to a cushy indoor aquarium to thank them for their service. The smallmouth was ticked off for a while and wouldn't eat until I gave him his own 85 gallon tank. Now he…

The previous post explains in overview what I have been trying to accomplish.  I want an economical, sustainable, and self-contained system.  Not only food production but heating and powering my home and business as well.

The greenhouse/aquaponics unit is my experiment and will eventually tie into everything on my property.  The biomass boiler will provide steam that will be plumbed to all buildings (just like they did in the old days) for heat, and will be intermittantly…