I Am a Genetic Engineer, Now

Before you guys accuse me of heresy I want to explain what I did and how genetic engineering works. (I wrote this quickly, so for any confusion leave a comment. Also, there should be a lively but informed debate—give everyone the chance to read what they wrote as they read yours. Philosophical debates are fine.)  Genetic Engineering in this case was with an E.-Coli bacteria (a non-deadly strain—there are 12 strains), and a Jellyfish that lives in Puget Sound. The gene in the Jellyfish was a…

Here's what I've been up to over the past few weeks:

System: As you can see in the attached photo I set up an aquaponics system in a greenhouse (it’s a tent, really).  It has a 55 gallon blue barrel for the fish and several grow beds using expanded ceramic media (hydroton) with flood and drain valves for plants.  There is a sump on the far end of the left trays.  The system is currently cycling in preparation for establishment of fish and plants.  I have several ideas for…

Finally found others doing aquaponics in Iceland. I've been looking for others and writing articles and have a fb site with 90 members. The other aquapons where hiding in my home town where I am studying...

They are renting a greenhouse but I have not yet met them.

I just got a 250 fm. leaky workspace for aquaponics with timber to build grow beds and pro fishtanks for goldfish (for show). I'm working with World wide friends which is an volunteer program with 1200-2000 volunteer…

Picked up our IBC tote yesterday and plan to do some modification today. Also picked up a grinder and extra cutting disks and a 45 watt solar panel kit (more on that later) from my local Harbor Freight store.

Once I cut the tote, clean it very well ... then it will be time to buy and install the pipe fittings, bell siphon etc. My pump has been ordered and should arrive this week. Next will be to get the grow media, rinse it completely and fill my system for the initial…

Finally located a safe IBC Tote to use ...

We finally located a safe IBC Tote to use for our system. I was amazed to find out what kinds
of chemicals are in those things. Many are not suitable to use for a fish tank or aquaponic use, no
matter how hard you try and clean them out.

My guy called me yesterday and said he had picked up 26 totes. I asked him to pick the best one
for me and hold it because our plans are to pick one up on Friday.

Still need to buy a grinder and some cutting disks, since I don't…

Alternative feeds for the Southern US and other tropical areas

I have been delayed in getting started here because the Easter period in Mexico is our most intensive Tilapia sales period from February 15 - April 8th. I have had and have nevertheless, every intention of developing this current "note" much further ASAP. Meantime, I would file this one under Feed Alternatives for aquaculture  but also very strongly under Food Independence/Security for our fellow humans as well.

I would like to very briefly introduce (perhaps to many) an…

AQUAPONS TO PRESENT AT PREPAREDNESS FAIR IN CENTRAL PA

I am hosting a Family Preparedness Fair in New Kingstown PA (Harrisburg Area) on the 21st of April and need an Aquaponics demonstration. If I could find a vendor to present that would be wonderful as well as I know at least three families that are interested in getting started. There will be between 200-500 at the fair. More information can be found at the fair website www.prep4s.net .

Harvested my carrots today.  They took a fairly long time to get ripe and next year I will plant them in a deeper grow bed.  They did remarkably well considering that I'm no great gardener!

My talapia are large enough to eat if I could ever actually sacrafice them.  As Sylvia said in her book, they become friends.  And it doesn't help for the grandchildren to NAME them.

I'm confirming that Red Worms overwintered just fine in bathtub grow beds, left to dry out from Nov. 20, 2011 to Feb. 20, 2012.  Around March 5 i spotted live worms.  This is an unheated greenhouse.  The beds are not insulated.  Lava rock in one bed, trap gravel (some kind of igneous, nonpourous rock) in the other.

Got our water well drilled yesterday ...

We finally got our water well drilled yesterday. About 30 feet deep and the water came out surprisingly clear after all of the crap came out and with no smell.

The well guy put some in his mouth, swished it around, spit and said we had a great well. I did the same and tasted nothing in particular. I did not swallow the water just swished and spit like him.

We have to get the water tested ... we thought about using a pool place to test my sample but don't think that will…

I have a newly established aquaponics system based on a s/steel 2200litre dairy tank and 10 flood and drain grow beds. the system is working well with 200 thriving jade perch and bunches of veggies growing very fast. the jade perch are a tropical australian fish that do not tolerate temps that drop below 18 degrees celcius. I want to construct a solar water system to keep temps no lower than 20 degrees. Winter daytime temps here are usually around 22-24 degrees, night time…

Was visiting family out of town ... but we're back now and ready to go.

We had some family business to attend to, but now we are back and ready to get our hands dirty ... or I guess wet. Time to buy all of the elements we will need for our aquaponic system. Should have our system up and running by April ... whoo hoo!

Do we sound excited? YEP we are and so anxious to get started on this adventure. Thanks again to all of you who have helped in the decision making process of what to use, buy and grow.

I have been locking into aquaponics, and have seen people online suggesting using rubbermaid stock tanks! checked with manufacturer tanks are not approved for human consumption. may leach chemicals BPA, and others into water. I don't understand it's O.K. for your livestock but not you! I dont think they should be using it for livestock! afterall don"t we eat the livestock? 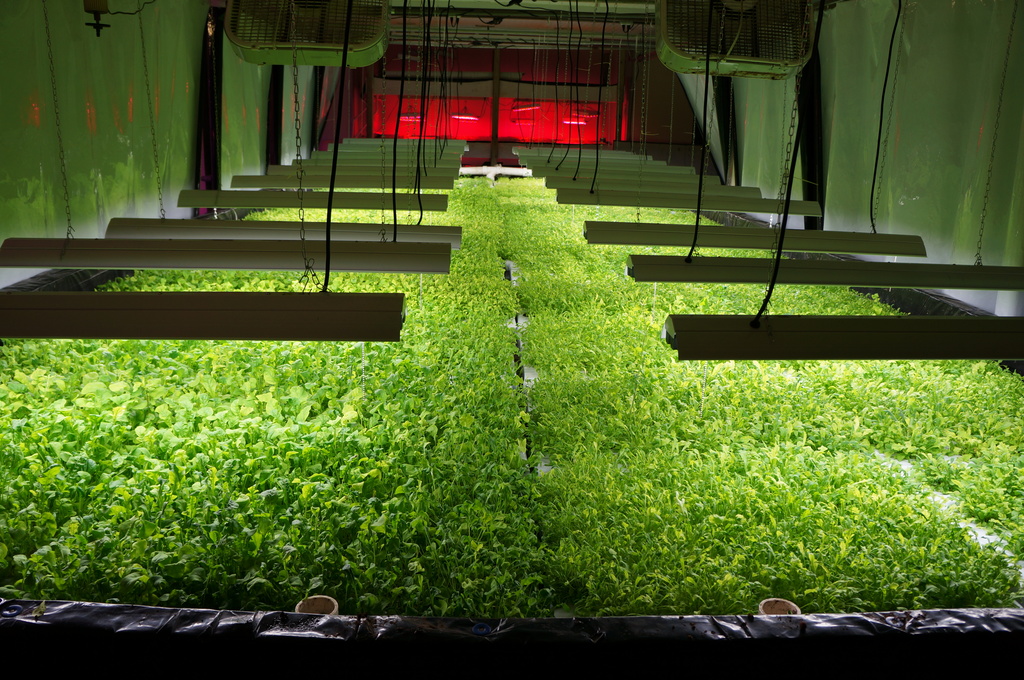 About a month ago I moved to Chicago from Milwaukee to continue my career as an urban farmer. I was pleasently supprised at the extensive amouts of urban ag and continual growth and awareness of urban ag in the city.

I work at an urban vertical food co-op called "The Plant". Located in Back of the Yards just south of Bridgeport on 46th and Bishop, the farms,…

Is there a need for academic research on aquaponics? I think so.

I THINK I've got the hardware system lined up although I'm waiting for some Ebayed stuff to arrive in the mail and I still need to go get some containers and shelving.... oh, and the green house itself.  All in the next week or two.  I'm also concerned about what type of fishies I'll use.  This system will be outside and temperatures here range very very dramatically even over a 24 hour period.  I'm thinking for Year #1 that maybe cheap gold fish... then sort out a stock that I can eat.

I'm start ing the season off with the same 40 goldfish from last year.

They've been living in the garage all winter. I just put some lettuce in the bed under a 2', 4 bulb, 24 watt, t5. It's growing slowly but it is growing. 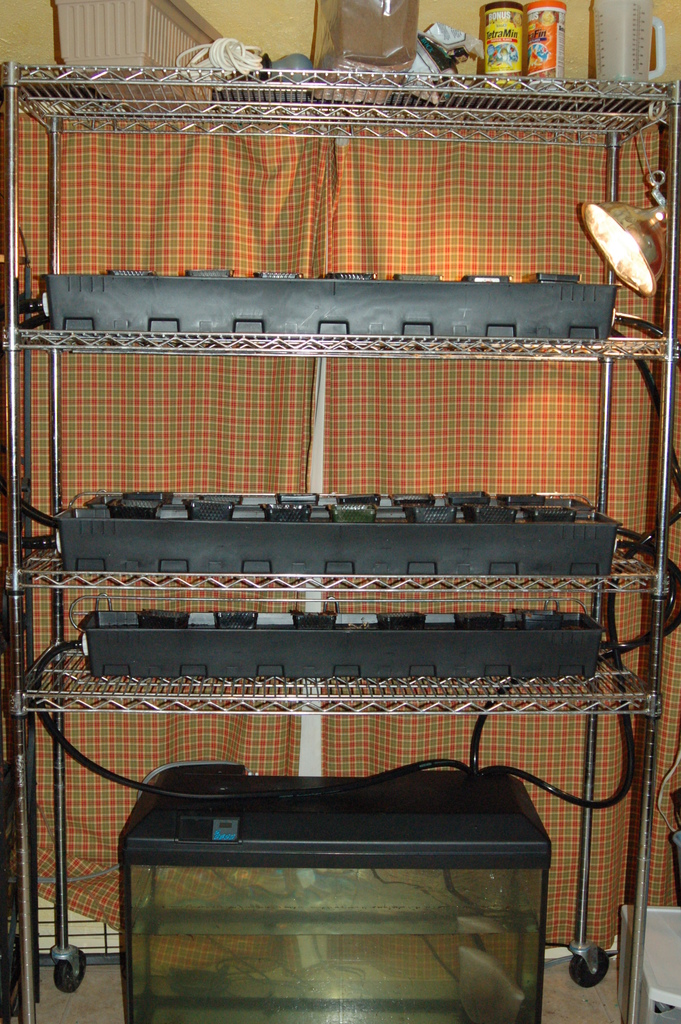 My system is finally cycling with the pots in the grow beds, soon their will  be little seeds a sprouting and little fish a swimming. Its gurgling a bit, but I am expecting the water flow to normalize as the loose litter moves from the grow beds to the aquarium tank below. I have long narrow grow beds, and rows of seven four inch pots nestled in a layer of aquarium gravel.…

WOW we have learned so much since we joined this forum ...

Looks as if we will be right on schedule with our system launching in April. Working out the last few details, ordering the supplies needed and making the space for the system. Thanks for all of the initial support and information. We could not have done any of this without the wonderful people of this forum.

Thanks Again I am sure we will have plenty of questions as we come online with our project.

THINGS TO NOTE ABOUT AQUAPONIC FOOD AND BENEFIT

Aquaponics is a water creation process, which consists of hydroponics and aquaculture growing practices. It is a process of growing fish in tanks while hydroponics is the art of growing plants in water. This whole exercise is aimed at growing both fish and plants in the same water body. Nevertheless, it depends with the type of plants or fish you are rearing to note the type of water you are going to use either salty of fresh. Whole year can grow fresh vegetable and fish. The aquaponic food…