Saturday a friend came to hang out for the weekend, and we went out through the softly falling snow (yes, in California, I swear) into the sultry air of the greenhouse, and I pulled up a bunch (it's not really a head at this point) each of the red leaf and the butter leaf.  I tore off the root ends, gave the leaves a simple rinse and spin, and put on a nice homemade vinegarette.  The salad was amazingly good.  My friend and I both were stunned at how flavorful the lettuce was compared to store bought lettuce.  Granted, these were baby greens also.  But still, it was the best lettuce I've ever had. 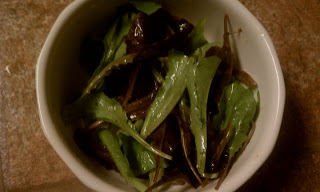 And here's the garden earlier in the day: 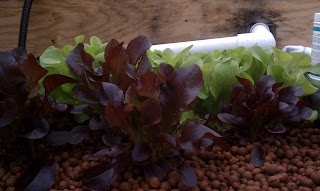 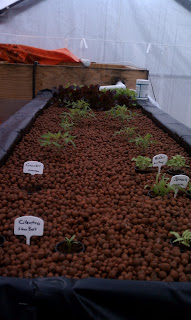 Monday (being a holiday) I transplanted the pak choi, spinach, and chard from their little coir-filled pots into the growbed directly: 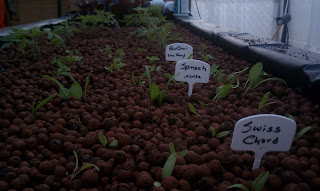 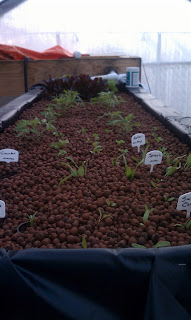 The cilantro has fully sprouted, but I didn't think it was big enough yet to transplant.  The cucumber is finally sprouting but has not quite popped its head out of the coir.  I think the warm water is what finally caused it to sprout.
The fish are once again eating energetically.  I'm so excited to see them looking and acting healthy.

I haven't yet got the heater hooked up to the thermostat.  But for now it's plugged in directly, and that seems to be working well enough.

To me what i grew in my system was much better tasting than from the shop...vege market down the road.

sweetcorn,tomatos,beans ...all had beter taste.

Eating home grown food is so wonderful and rewarding