The lettuce are SO happy in their new home!  They're growing so quickly I almost feel I could stand there and see it happen.  These are actually several seedlings in each group, so I'll separate them in another few weeks when they're big enough, and strong enough, that I think I can do it without hurting anyone. 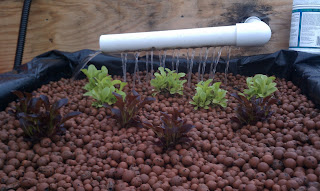 I also started some new seeds.  And this time I labeled them!  I always think I'll remember what I planted, or I'll recognize it when it gets bigger.  I have learned my lesson.  These are labeled and will stay that way even when grown.  Unless I can actually see Red Bell Peppers hanging off a plant, I won't know that's what it's supposed to be.
﻿ 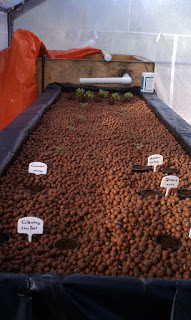 New additions:
Swiss Chard
Spinach
Cilantro
Pak Choi
Armenian Cucumber (yes, this one's going to get ridiculously big.  I'll either tie it to the roofbeam or enclose it in a tomato frame)

On the fish front... I'm pretty worried.  Since I've got the water flowing through the system, it's one huge evaporative cooler.  And of course that happens just as our weather goes to hell (for CA... I know it's nothing compared to the rest of the country, but I'm set up for CA weather).  And the aquarium heater just isn't keeping up with it.  So now the fish aren't eating.  And since it's dark in the tank, I can't even see in well enough to be sure they're alive.  But if they are, they won't be long if I can't get some food into them.  So I'll stop at the fish store today and see if I can get a better heater.  I'm also considering turning the system off at night.  Maybe 8 hours of still water with the heater going will warm it enough.


So the plants are thrilled, the fish may be dead, and I'll learn more this weekend.  :-D

I didn't even SEE the link on your first post.  lol.  Okay, I need that.  I think the bucket heater rather than the greenhouse heater.  While I do sometimes get a little snow in the winter, my weather is usually a bit warmer than yours.  The warm water should keep the greenhouse plenty comfortable.  Also, it's not a sealed greenhouse, so I'd be wasting a ton of energy trying to heat it.

You're the best.  Thanks.

I've got a 340 gallon tank.  And I admit I have no idea what the wattage is on the heater, but it's a basic submersible thing that looks like a huge, fat thermometer.  A lot like this one:

I suspect it's way underpowered for the tank it's in.

How big is your tank? I have a 1000 watt heater controlled by a thermostat on my 200 gallon tank. It will heat up past 150 degrees if I didn't have a thermostat.