Time for all the plant experts to wade in please!  I have been tinkering with a number of different media-less / media filled growing configurations of late.  The ones that interested me the most in the end was partly filtered versus “dirty” NFT.  The reason why this has become interesting for me relates back to the type of technology that is required to run these.  Should there be some way of making “dirty” NFT work, then there should be an advantage in trying to understand what I am observing here.  There is already (kind of) a precedent for thinking that “dirty”, media less culture could work – Nate Story’s towers.  While this blog is not designed to suggest that people turn their backs on conventional design (What, ME suggest something like that?

), I am more than a bit interested in the implications that it could have.

While Nate’s towers obviously have the filtration angle also covered, my interest in the experiment’s outcome is related to plant morphology, and how this influences what we can do with aquaponics.  What got me thinking was looking at the roots of the two sets of strawberries.  I had two configurations going: The one was in a system with nitrates hovering around 14 mg/l and getting a permanent flow of water through a horizontal 110mm pipe, while the other was constructed the same but getting less nutrients and intermittent flow.  The results were kind of obvious in one way but not so (to me in any case) on another level.  I expected the dirty line to eventually soil the roots of the strawberries.  This did not happen, but the roots of the partially filtered unit was a different story.  They appear to be much finer, and permanently dirty even if you carefully try to rinse them.  My reasoning is that when nutrients are sparse, the plants put a lot more energy into creating a fine root network, which in turn clogs easier with the fines still in the water.  The strawberries growing in the higher nutrient stream were not that fussed, as a smaller root mass could keep them going.  They therefore never made the fine root mass and as a result, the “dirty” NFT was never a serious problem for the plants.  It has never been cleaned and the plants are thriving.  The plants in the low nutrient (the tilapia was removed and the koi are still small) unit on the other hand are struggling a bit, to the point that I considered replacing the whole lot to see if it is not an issue with old stock.  The two sets of plants are, however, from the same stock. 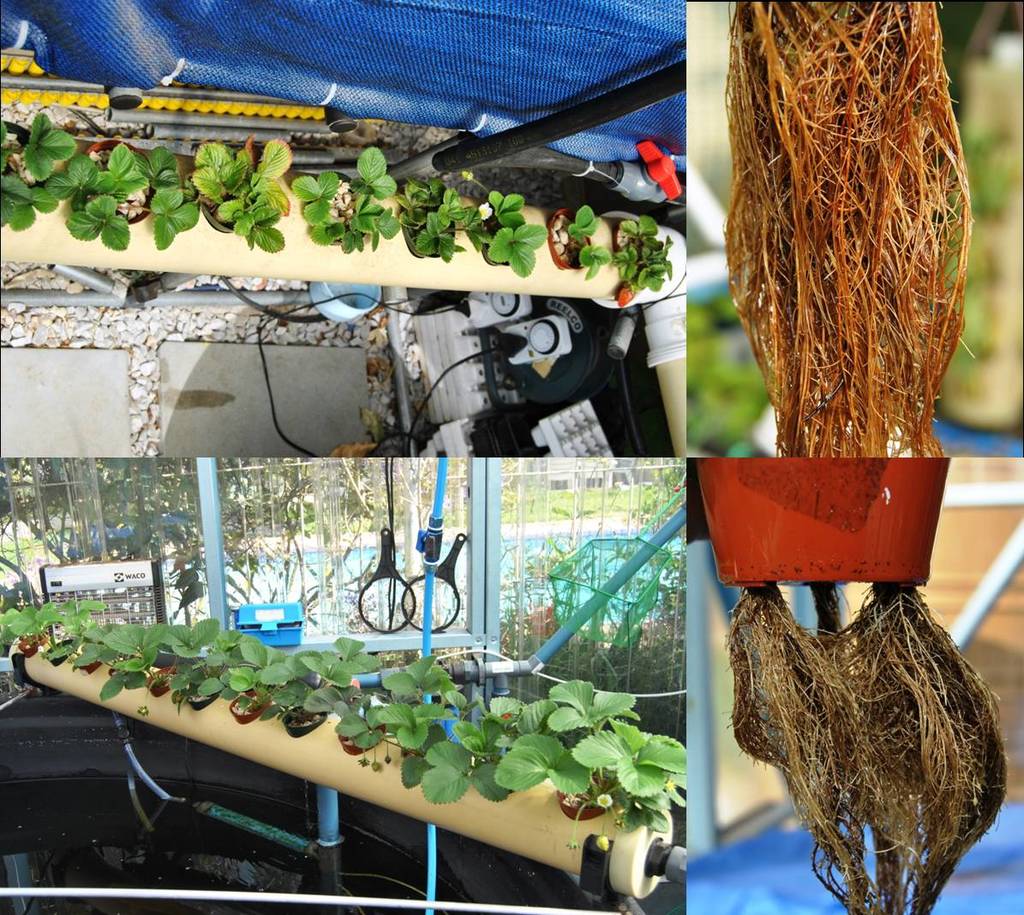 For me the implication here is in system design.  I have always considered NFT to be a set-up that needs perfectly clear water.  Now, the outcome of my little experiment has thrown me a bit. It seems as if NFT can be operated either on very clean, or very dirty water?  The partially filtered water seem to be a problem in low nutrient conditions, but would perhaps also have worked well in a high nutrient environment.  I’m interested in the feedback from others on the forum regarding my observations.

Hi guys, long time no here. Sorry, been super busy lately. Anyway just to add my two cents. I agree with everything everyone said esp. what Chi said about diversifying biology. In my opinion, as long as the solution is well oxygenated and roots are rot free, you wont have much problems. After that its a matter of balancing your stock growth with your planting cycle in the case of heavy feeding/ fruit bearers like tomatoes. I think an aerated bio-reactor (which Nates towers are actually functioning as) is necessary for lighter feeders like lettuce.

I also think that solid fecal matter, no matter what the source, adds risk and should be processed before it reaches the roots. As long as the plants are downstream of the bio-reactor, I believe the plants wold receive all the biological benefits without any risk. The problem with overloading a system with raw sewage is that the plant roots may be deprived of oxygen due to suffocation. The reason why most of you using media based systems are not experiencing root problems is that in fact you have combined the filter/ bio reactor with aeration in flood and drain environment. Deep water culture does not suffer this problem either.

As for root mass; I believe you observation is correct. However, I have to agree with your assumption about colonizing biology up to a point and that point is; until it reaches higher temperatures, effecting oxygen availability. So to prevent this, you simply make sure the solution is moving with short duration of exposure to heat, as in your system. But try that on a thirty foot run, outdoors, in the summer and see what happens;)

Hum, interesting.  When I had tried the pipe with plants and really dirty water, it got bad enough to actually make me gag when I pulled up a plant and globs of solid waste were released.  And I don't gag that easily.

Then again, that system was VERY heavily stocked that season I had about 45 lbs of catfish and probably 50 lb of tilapia in the tanks.

TCLynx - I consider the functioning of a dirty NFT and Nate's tower very similar even if there is media in one and not the other.  In my set-up described below, The solids fill the NFT to the point that a large portion of the strawberries' roots are covered in a layer of it.  This is not cleaned, thus it will become colonised by the same organisms as Nate's towers allow.

The research system has a centre drain pump that pumps the water to the clarifier, while some, unfiltered, is returned to the fish tank to set up a circular flow pattern.  a portion of this flows through the NFT thus in effect, it is totally unfiltered as if the system was just fish tank, NFT and return to fish tank.  I have in-line filters (two big blue canister filters) between the pump and the return flow to the fish tank, but am not using them right now.  At the moment, the fish tank sees an input of 52 grams of food per day.

Hum, just goes to show that things can be very complex.

I've tried very dirty water NFT before, as in pump water directly from a heavily stocked fish tank and divert some of it though an NFT pipe.  That didn't work well for long.  For the first week I didn't see a problem and I don't remember much about the second week but by the third week, the stuff getting caught up in the pipe was really starting to stink and the plants had stalled.

So, How "dirty" is dirty.  My current nft pipe is getting water that has been filtered through media beds first.  It is not perfectly clear water but it certainly is clean enough to allow plants to grow out without the roots going stinky.  Actually to the point that the basil will grow root masses so big that they can block the pipe.

Both NFT pipe situations got a fairly fast flow of water all the time (no intermittent flow.)  Both had high nitrate levels of probably 100 ppm +.  Both were also suffering from the same less than optimal pH so Iron is an issue.

Now Nates Towers I don't count as NFT since they are not media-less growing  Those towers are what they are because they are Media based.  Now I think the solids in that situation are actually a benefit to the plants because the plants and critters have access to them in that media matrix along with ample aeration.

I have noticed a marked difference in my big system with it's high pH problems that the plants growing without media, suffer far more from nutrient deficiencies than the ones growing in media, and that includes in the Zipgrow towers (the plants in my raft bed and nft are far more affected by the iron lock out than the ones in the towers or gravel/shell beds.)  I think the plants having access to the solids and the worms and other mineralizing critters in the media probably gives them a greater ability to get the nutrients they need even under less than optimal conditions (provided there is enough dissolved oxygen or air available.)

I'm sure it will Chi.  I set the "dirty" line up as a way to try and contain nitrates in the research unit (duckweed filter) but I can see a great little simple method with what you suggest (and are already doing?).  This would be a wetland or estuary/river interface mimic, where the nutrient rich muck from the rivers hit plant roots, are colonised by all things useful and get a massive nutrient recycling pathway going.  Love it.  I seem to work on two lanes of thought. On the one hand, I just love simple, natural systems such as these and then on the other hand I love to tinker with more complex, layered units.  Maybe one day I'll get to combine the two.....

Comment by Chi Ma on October 1, 2011 at 7:36am
Can critters help with dirty water in NFT? I have various snails, shrimp and small fish in my NFT tubes. They seem to like eating the bio slime and dead roots off the plants. I do notice that the tubes that don't have any critters in them the plants aren't as vigorous.