I discovered that the drain holes of my standpipe had gotten pretty restricted and the growbed was barely draining at all between flood cycles. So everything has been living in 8-10" of water all the time for I-don't-know how long. That certainly explains why the tomatoes were splitting. I twisted the media guard to break off some roots, and I scrubbed inside the standpipe with an old toothbrush, and that seems to have done the trick. The better long-term solution will probably be to convert to sub-surface constant-flow. But I don't think my new half-barrel beds are as healthy as my main bed, and they're constant flow. So perhaps there's a problem I need to resolve, or perhaps constant-flow just isn't as effective. I'll do more research.

I built the legs for the new frame, but haven't attached them yet. No pics of that at this time.

I picked (and ate) another radish.  Boy when they're ready they practically pop out of the media to tell you so. 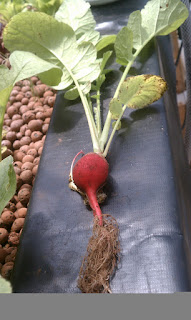 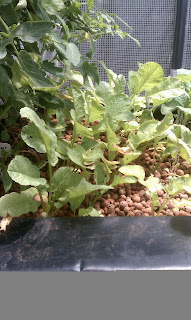 I pulled out all the chard, put the biggest leaves and most damaged plants into the composter, and replanted 4 or 5 tender hearts in an East-West line so they wouldn't shade anything but each other. 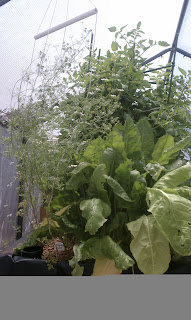 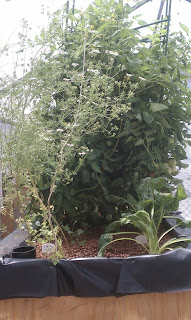 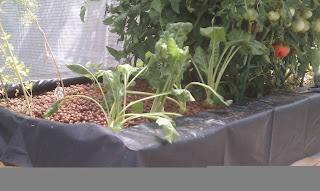 They had really compacted root balls.  Here's the one I pulled out of the corner: 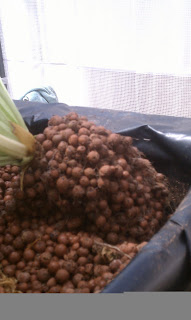 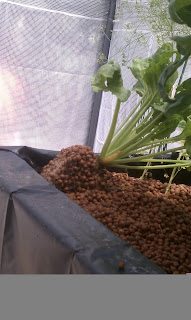 I moved the carrots into the space where the chard used to be and planted some more seeds of that., and I planted some spinach seeds. 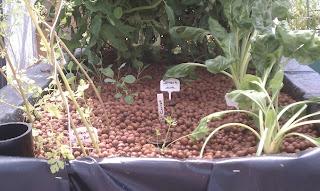 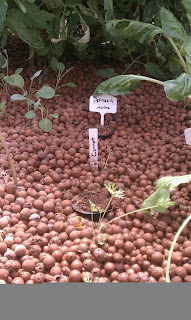 Beets are growing slowly. Cress looks so happy and healthy. Cabbage is starting to get eaten by bugs, but is otherwise growing well. Cucumber vine has grown all the way to the top of the stake and I don't know what it's going to do next.  Lettuce is getting bigger. 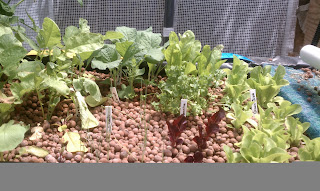 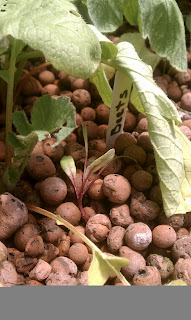 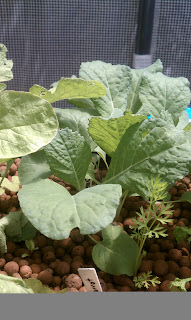 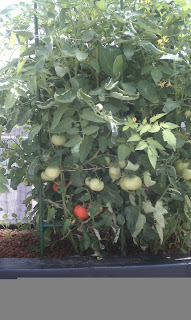 But the plants in the new bed just don't have either the growth or the color. 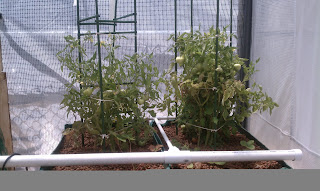 The earwigs are really attacking that end of the growbed. I just looked up organic earwig control and found out that the earwigs help control the aphids. Sigh... But the earwigs are also eating up all the greens over there. That's not acceptable. There's a suggestion for a trap using a straight-sided container (like cottage cheese container) half-filled with vegetable oil and buried level with the surface. I think I'll try this one.

The fish are active and eating well.  I nearly killed them again, but I learned something important in the process.  For the last few weeks, I've been adding about 1/4 cup of muriatic acid to the front sump in an attempt to slowly lower the pH.  I usually test the next day and don't see any change.  I decided that I wasn't adding enough to make a difference, so this time I put in 3/4 cup.  I tested soon after and the pH had plummetted to dangerously low levels.  Like too low for the test to properly measure.  Ack!  Not again!  So I immediately started draining water from one end while pumping in hose water from the other end.  I got it back up to high low 7's and stopped.  4 hours later it was back to high 7's (and the fish were eating again).  I have concluded that something in my system is buffering it and I just shouldn't try to fix it again.  I suspect the 1/4 cup acid I'd added before was moving the pH, but by the time I tested 24 hours later it was back to normal again - so I never realized it was doing anything.  So the pH is just going to stay where it is.  Meanwhile, I added about a quart of Maxicrop seaweed.  Since I keep running an acid bath through there, I'm sure I've killed off the bacteria again.  So at least the plants will get fed while everything reestablishes itself.

I also received a shipment of tilapia food.  They've been getting koi food up until now.  I'll finish this open bag of koi food and put the closed bags into the freezer as emergency rations, and start them on tilapia food.

Thanks for your kind words.  I don't currently have a barrel in which to balance my tap water prior to adding it.  But it sounds like I'd better get one and figure out how to transfer balanced water out of it into the sump.  I will do that.  Thanks.

Comment by David Waite on June 19, 2011 at 9:50pm
Andrea in your acid calculations try to balance your top off water before you add it. This will help with the swinging ph. System is rocking, looks great. Also keep in mind it takes alot less acid to move your water at the lower end of 7 than the higher end of 7.8.