Radishes will evidently grow just fine in AP, despite being root veggies.  This gives me great hope for the carrots, as they are supposed to be golf-ball size and shape. 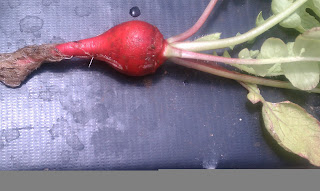 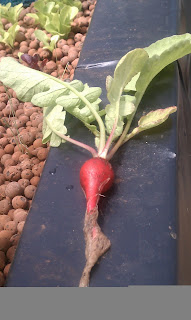 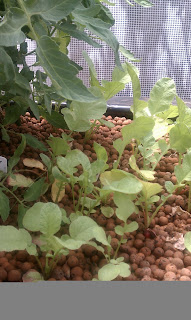 Strawberries were shaded so completely by the chard and tomatoes, I decided to move a couple of plants to the barrels with the tomatoes.  They seem to be happy over there.  I might move the others this weekend. 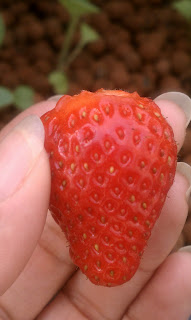 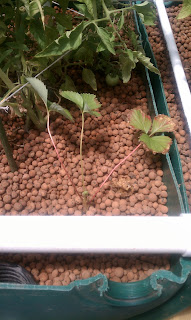 Cilantro bolted, but is now making lots of seeds, which fiance reminded me are corriander (one of our favorite spices) so I'll be harvesting those.  He rigged a nice support for them meanwhile. 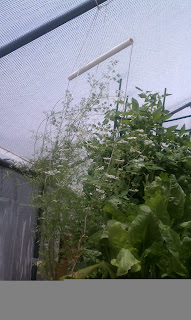 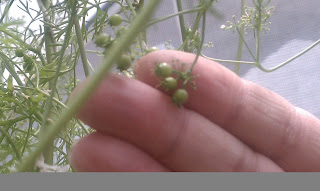 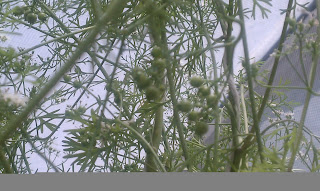 Chard has been attacked.  I think by earwigs since that's what I'm seeing on them.  I will probably pull up the plants this weekend, compost the less hardy, pull the outer leaves off the strongest, and replant the hearts. 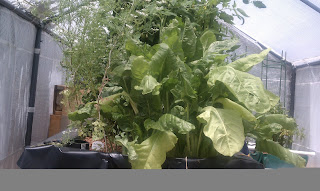 Tomatoes are starting to produce a LOT.  I knew I was going to be in trouble, but I'd forgotten how MUCH trouble.  I fully expect to be pulling a grocery bag of tomatoes each week for a while.  Fiance has promised to ask SIL about best ways to freeze/can/something tomatoes. 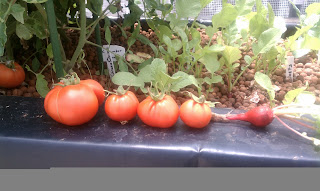 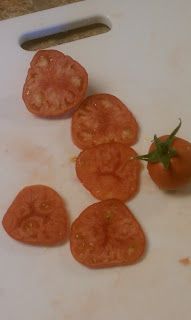 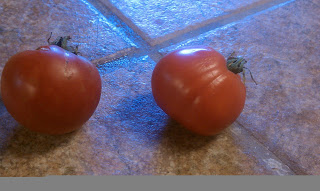 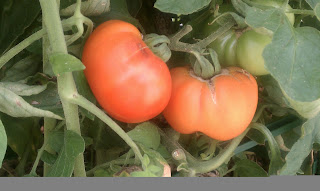 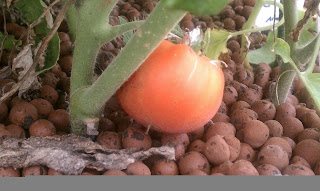 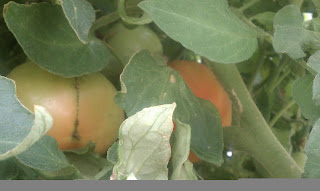 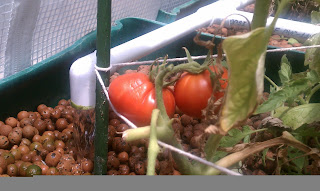 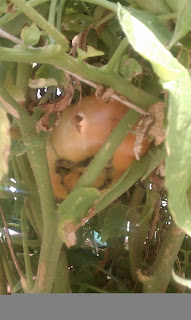 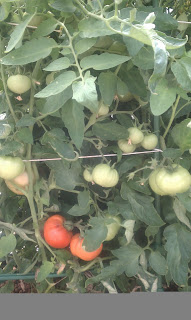 Savoy cabbage grows so quickly it doesn't even look like the same plant from one week to the next.  Leeks are looking less floppy, but that's all I'm seeing so far.  Lettuce looks good but is a ways from harvest.  Cress and Arugula are growing slowly but look healthy.  Brussels sprouts are growing a lot but I don't really know what they're supposed to look like at this stage except that they seem healthy and happy. 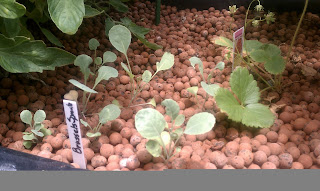 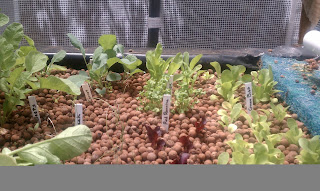 The cucumber vine is getting pretty tall. I had intended to run it up the center stake, but fiance didn't realize that and has it coming to the front stake. I think it'll be okay. Though I had hoped to have all those tomatoes moved by now. But that didn't happen and they're so huge I think I can no longer safely move them. I'll just have to wait until they're done producing, and learn from the experience.
I bought a 50L bag of K1 media and dumped it into my rear sump tank.  I also hooked up a heavy duty air filter to blow through there.  This tank is now officially a moving bed bio filter. 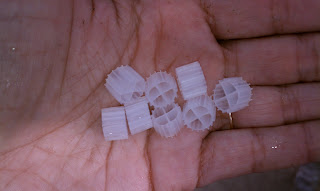 Comment by Richard Wyman on June 7, 2011 at 6:17pm
Andrea, your cilantro is edible at all stages.  The flowers taste the same as the rest of the plant and look great too in salads.  My favorite herb. So easy and always usable.

Comment by TCLynx on June 7, 2011 at 5:03pm
If you add acid to the tomatoes to make sure the acid content is high enough you can safely use the boiling water bath canning method.  But if you prefer less acid in your tomatoes and don't want to add lemmon juice or vinegar then you should use a pressure canner.  Here is another link that I have found useful when looking for help/ideas for preserving food. Harvest Forum

Thanks!  I already can a lot of jams and such, but I know that tomatoes should be done with a pressure canner and I don't (yet) have one.  I think I'll do something about that... immediately!

And thanks for the link.  I can already tell I'm going to be referring to it a ton.    :D

you can also slice and dehydrate tomatoes.

And if you have canning equipment tomatoes are a good choice for that.  Here is a good resource for canning rules/instructions.  When canning food it is really important to follow the instructions to be sure your preserved food will be safe.

Thanks!  Do you put in juices to fill up the crevices, or just freeze as is?

And it's nice to hear I don't need to blanche and peel first.  That will save me a lot of time.

Comment by steve on June 7, 2011 at 1:16pm
Hi Andrea, Your garden looks nice. I throw tomatoes in a lg. ziplock and freeze. When you take them out and rinse under water the peeling comes right off. Easy to chop for sauces frozen.