The aquaponic system that can be running in a day

There have been many reports of system cycling issues – most of which revolves around peoples’ problems with understanding the whole Nitrogen cycle.  At a risk of causing frustration with people that thought that there were no exceptions to the rule, I would like to report back on a research system that I have started in 2010 and which basically runs on the concept of trying to avoid the cycle all together.

Originally developed to find a way to diversify aquaculture in South Africa, it was based upon reading up on waste water treatment, green water, biofloc and UVI aquaponics papers.  As the research is nearing completion and some limited promotion of the process have to be made to comply with the funding agreement, I have an opportunity to introduce the basics of the system.  It produces fish on the one end, and yields all the components needed to make fertilizer on the other end.  How I make the fertilizer will not be discussed, but the end result is as neat as a media-based system: None of the food input to the fish is wasted.  Every scrap becomes useful, and when all is said and done, one can develop a formula of fish mass plus fertilizer mass produced for every gram of food added to the fish tank. 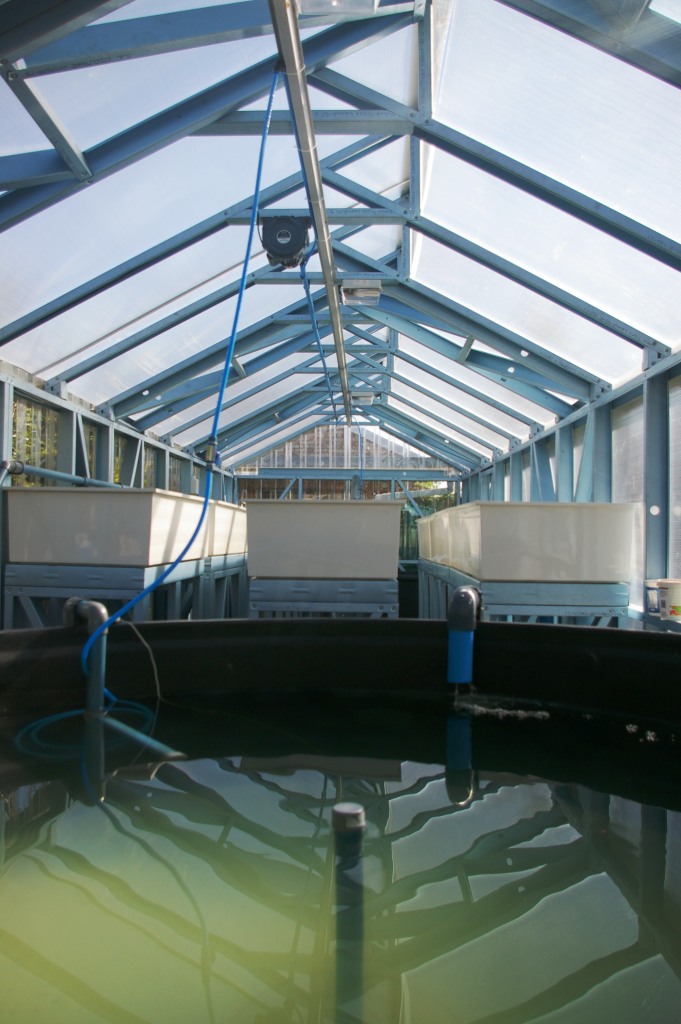 The view above was taken at start-up in 2010.  Once a bed is fully established, it resembles the image taken below: 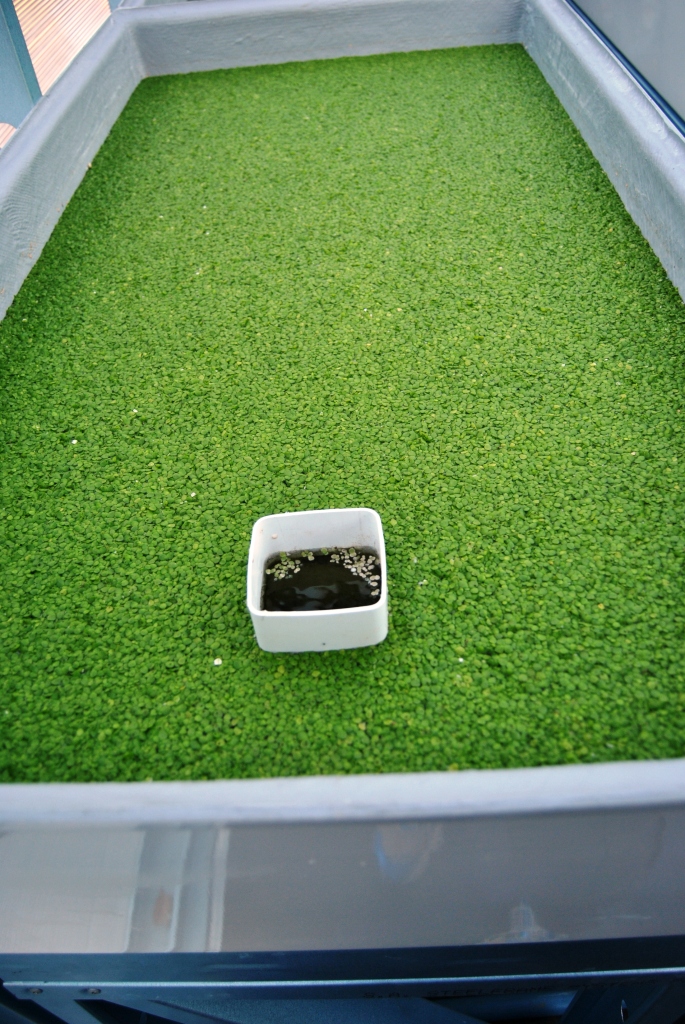 As stated, the unit has the uncanny ability to be switched on in a day, or alternatively as I have just done, switched off on the filter side for three days, overhauled and cleaned and then simply switched on again.  I was loosing a battle with fungi growing in the duckweed beds and decided to clean the whole thing out.  I also got to replenish the duckweed stock to see if a year of living off a sniff of Ammonia had impacted on the original colony.  The reason for the system working is simple.  First, the stocking density is still experimental and kept low, and the fish are not fed if the filter is isolated.  Secondly, I discourage the nitrogen cycle with a passion as my plant of choice is duckweed, and in particular fat duckweed (Lemna gibba).  The filter bed (9 interconnected DWC beds) is 7m2 in the trial unit, and holds around 4.5 kg wet mass.  The fish tank holds 37 large tilapia and 17 small to medium koi.  It is winter now thus I am expecting that warming temperatures may push the ammonia content of the water up to the critical 2 mg/L TAN that I am looking for as an upper carrying capacity indicator, but presently it is rock steady at 0.25 or lower, suggesting that just about all the Ammonia produced by the 55 fish in the system is absorbed daily.

The thought pattern behind the design is simple: If you work carefully with your fish to duckweed ratio and remove the solids from the system, you are essentially creating a stable environment with no nutrient build-up in water or sedimentary sinks.  The basic nature of the unit – a fish tank, a pump, a swirl filter and a Lemna filter (see, I tossed the aeration again) is also a joy.  There is a back-up UV sterilizer to deal with algae coming in to live off the nitrates being ignored by the duckweed and a back-up 70 W vortex blower for when the filter goes off line, but standard operating procedure is one 45 Watt pump always on.

The research is part of pre-commercial work, but has many applications.  For people running UVI-style units where solids must be removed, the unit has some application.  For people that want to grow part of their fish food in duckweed form, there is application as an addition to the current system lay-out.  Finally, as was the intention with this work, there is the option of producing a fertilizer certified for use in the production of organic crops.  Such fertilizer is worth a heap of money in South Africa and based on the outcomes of the initial experiment, we will be able to produce a business case study for the potential of focussing solely on producing fish and fertilizer.

Comment by Kobus Jooste on July 21, 2011 at 9:45pm
Eleen - If all goes according to plan, the first bacth of the "active ingredient" will be heading off to an analytical lab in the next week.  This will provide a lot of clarity in terms of the type of fertilizer that I have made, and how it must be prepared for use.

Comment by Ellen Roelofs on July 21, 2011 at 5:14pm
Thanks for sharing - I will be very interested to read more, particularly about the fertilizer.

Comment by Kobus Jooste on July 18, 2011 at 10:54am
Averan - The priority here was not just fish but an attempt to show the potential of aquaculture as a viable secondary industry.  Business case studies keep showing the risk of aquaculture due to high input costs and the low value of the fish at present (we cannot get Nile or Hybrid tilapia permits thus also cannot export).  By showing a potential for aquaculture in mixed crop scenarios, I am hoping to show the possibility of developing a low tech viable aquaculture facility (The full scale version).

so you're flipping the priorities back to the fish, but converting their wastes into a salable product via aquaponics.

this is one of the things i like most about aquaponics, it can be adapted to suit whatever commercial niche you are trying to fill in order to make a profit!

i can't wait for people to try out saltwater aquaponics systems raising salmon or trout with seaweed....the possibilities are endless!  =)