First I drained the existing liner (involved setting all the grow beds to constant flood to hold the extra water so I didn't waste it all. I also filled up some other tubs with water to try and conserve. Even so, I of course lost some. 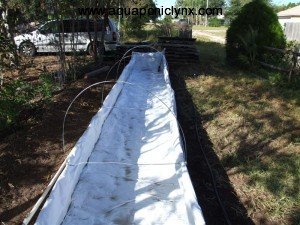 Anyway once the bed was drained down, I tried to clean it out a bit and I cut slits along the outside edge to let it drain the rest of the way and added a few holes in the deep spots and one end. Otherwise I have left the billboard liner in place as and underlay to help protect the more costly EPDM though it is usually tough enough not to need as much protection. 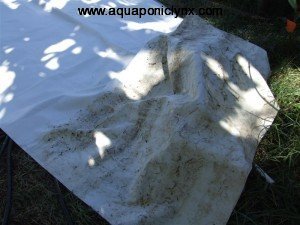 However, this isn't Firestone Pond guard EPDM and even through it's supposed to be the same mil, it doesn't feel as heavy. I'm also a little worried that it smells a lot more than the Firestone stuff I'm used to. This stuff is actually white on one side and black on the other. It was being sold as "pond liner" but I'm a bit worried that this is actually roofing EPDM.

I unfolded it since it wasn't folded in a way that would easily lay out into the bed. I sprayed it off with the hose hoping that a rinse would help, it smells strong. The ends are also dirty, must have been sitting on a wet floor before getting boxed up.

Anyway, got the liner re-folded and rolled so I could place it in the bed and unroll it as the stays and arches would not let me just drag it in. 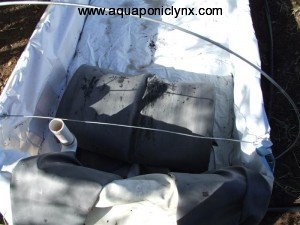 Lifting the rolled up wet linger into the bed kinda impressed me, the liner dry was 85 lb so I'm certain that with some of the rinse water still trapped in the liner it must have been more when I lifted the roll up.

Note how the liner is folded kinda like kleenex when I unroll it down the bed. 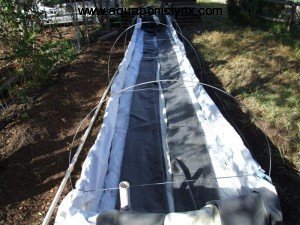 This is very helpful when laying long liners into rectangular beds. It helps to get the liner roughly centered in the bed and then you simply flip the sides up. 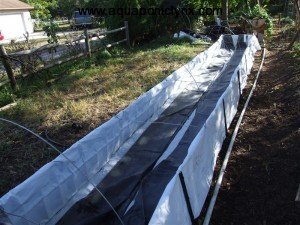 Of course was a little trickier than that in this case since the stays were in the way so I had to cut slits for the overlap of the liner to fold over the outside of the bed. 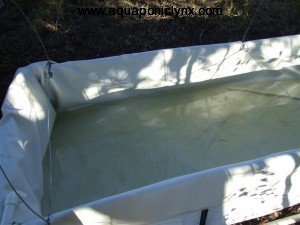 As I noted, there is a really strong smell to this liner. I'm worried that it might not be fish safe even though it was being sold as pond liner. 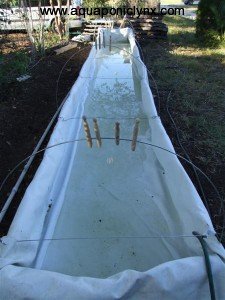 So, I didn't completely patch it back into the main system plumbing yet. I re-filled it half way so I could set the rest of the beds back to flood and drain. And then bypassed the flow to/from this bed so I could keep it isolated for a while.

I have added some test pilots. Two Catfish. 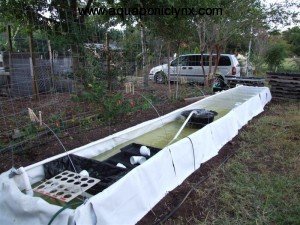 Since taking the pictures I added a couple 3 foot towers worth of filtration as well.

Comment by TCLynx on November 16, 2010 at 6:11pm
I've used the firestone pond guard with little more than a quick spritz (heck, the first one I installed didn't get any special rinse and system simply went online.) I expect that a newly planted water garden will take a couple months to simply get the bio-filter established which would also explain the plants not taking off right away.

Well the two fish in there are still living anyway though the filtration supporting them is experiencing a little nitrite spike :( so I added a bit of salt for them which could also help keep their skin healthy. The small fish that looked a little beat up doesn't seem any worse a few days on.

Comment by Paul Ellinghuysen on November 16, 2010 at 4:37pm
One thought,the birds love fish. I have read that EDPM liner off gases for two months. For me when i install that liner in my water garden it did take that long before the the plants started to really grow. The fish i placed in there seemed to do okay. I dont recall any deaths. Paul

Comment by TCLynx on November 15, 2010 at 8:31pm
So anyone have a comment about how long I need to test this stuff with the test fish before I can safely hook it up to my main system?