I fear the leaks are not going to be slime healed and the used billboard liner is just so brittle and easy to abrade that I'm either gonna have to turn this into a wicking bed, or get some EPDM to put in it. I must admit that having handled EPDM so much, I was probably not gentle enough with this stuff. I'm not used to walking on egg shells around my pond liner. One has to be really really unlucky to accidentally puncture the heavy duty EPDM pond liner. I've dropped knives and tools on it with not a problem. This billboard liner, I fear it would definitely not stand up well to being a gravel bed. So any of you who get one of these for use as fish tank liner or DWC bed liner, hopefully you are lucky and get one that isn't too old and isn't as brittle but also be rather careful with it as you place it since rough edges or corners can easily cause tiny leaks.

So here is the shot of the length of the bed showing minimal bowing so that is good. 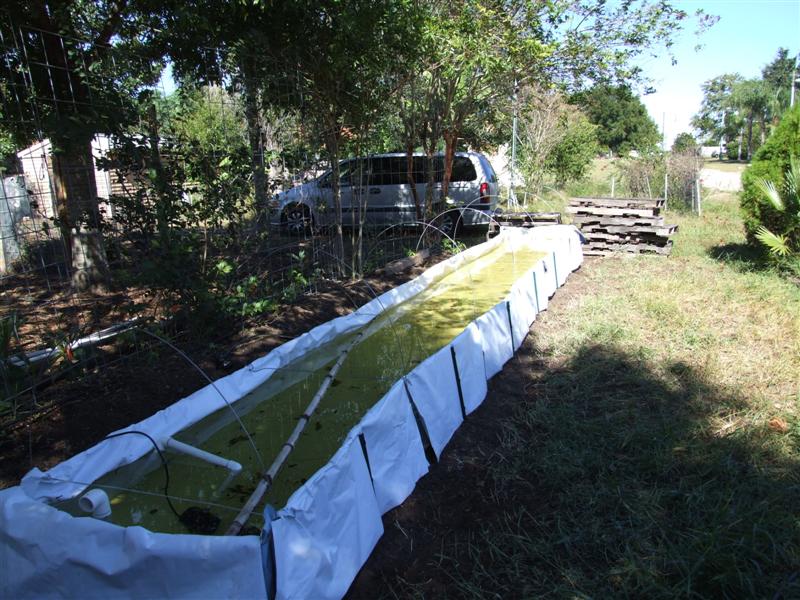 And I rather like this wire for arches. I'll probably do more of this around the garden. This winter it may look like the covered wagons have moved in. 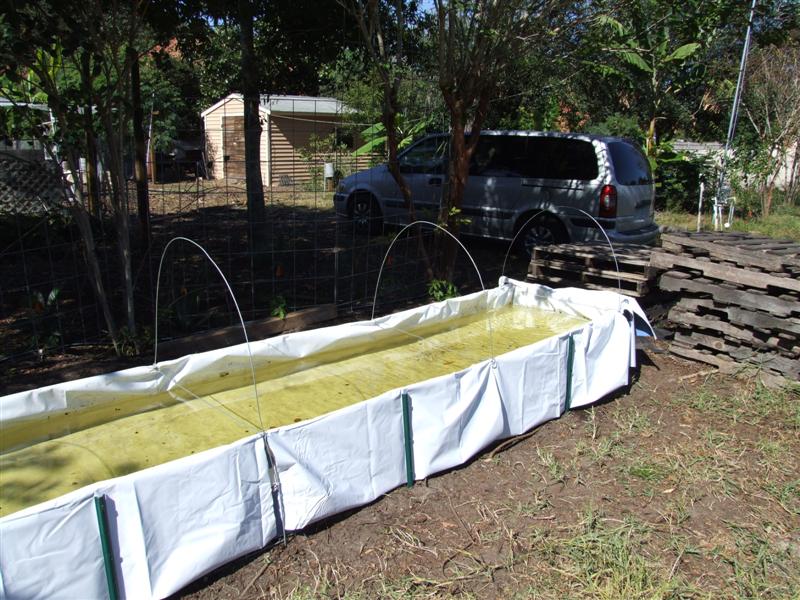 And here is one of the wet spots around a leak site (there are several on the other side of the bed.) 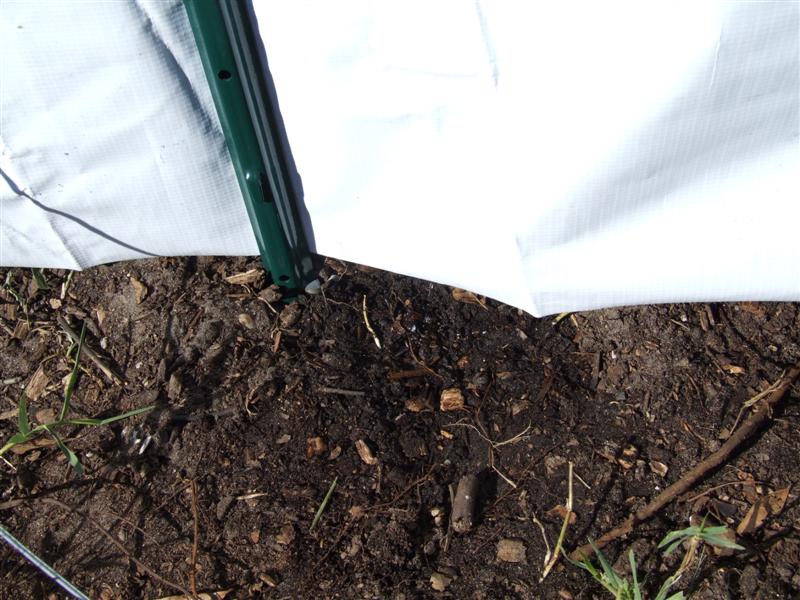 This shot is all blurry but you can see the shiny wetness showing it is more than just seeping but actually spraying out. Comment by Paul Ellinghuysen on November 11, 2010 at 5:58pm
Thanks for the info. Im headed to lowes next couple of days ILL check it out. Paul

Comment by TCLynx on November 11, 2010 at 5:38pm
Well Paul. The wire is simply the fence tension wire (I think it said 9 gauge but I'm not certain) on the shelf back by the chain link and stuff in my local Lowes. I cut off 7-8 foot sections and secured them in place. I think I will cut 7 foot sections and put them over the wood and liner wicking bed I lately filed with dirt. Just need a heavy duty cutter (little wire cutters or even normal pliers with cutters won't do it.) It isn't quite as heavy duty as the wire the cattle panels are made of but I think it will be plenty for holding bird netting or frost blanket and old fashion cloths pins should be able to hold it instead of needing to buy special fabric clips to hold it over PVC.

The roll of wire was $17-18 and 170 feet long so definitely more efficient than 10' lengths of PVC when talking about 8' long arches.

Just be careful when you cut the stuff as it's rather springy. I had used claps to pin it straight and measure out the lengths but when I cut the loosed ends spring free with a bit of force and can cause a painful bruise if you don't secure the wire on either side of the cut :(

Comment by Paul Ellinghuysen on November 11, 2010 at 4:48pm
TC , where did yiu get those wire hoops? Ive been thinking about something other than PVC.That might just fill the bill.Thanks Paul

Comment by TCLynx on November 10, 2010 at 6:51pm
some of the billboards may be just fine and I think they will be great for large in the ground dirt wicking beds.

Some of them might be good enough to trust to a raft bed, that would be an individual assessment based on the condition of the particular liner as well as weighing how much of a problem it would be to drain and patch if a puncture did happen.

I just would not trust them up against gravel.

Comment by Paul Ellinghuysen on November 10, 2010 at 6:42pm
Thanks for posting and leting us know the billboard liner not all that great. I think i will use mine as a weed barrier to go between my raft troughs.That willmake good use of it. Im doing my best to get some of my pictures loaded so far no luck. Paul Ellinghuysen

Comment by TCLynx on November 10, 2010 at 12:10pm
The EPDM liner is on it's way, I ordered it the same day I wrote this post. This particular billboard liner is just too fragile. I'm sure some of them hold up better but I could probably puncture this on with my fingernails if I tried. For a raft bed, I'm not nearly so worried about the less sturdy liners since the would be easier to drain and patch (not being full of gravel and all.) But this one already leaking so much and being so brittle that draining and patching would probably be way too often, I'm just skipping it.

Yea, I've used EPDM for gravel beds no problem and for ornamental ponds they are the best since you don't need to worry about hurting the liner while arranging the rocks and waterfall stuff.

Comment by Rob Torcellini on November 10, 2010 at 9:53am
It will be interesting to see how that billboard liner holds up. I hate to say it, but I wouldn't risk using it.

You're right that the EDPM is tough. I have 1/2 ton of sharp crushed granite in each of my beds and it hasn't punctured it.

Comment by TCLynx on November 9, 2010 at 2:14pm
Would anyone believe this? I put a small hand full of moist sand down by that leak that was spraying and slowed it to a seep!?!?!? Talk about pin hole!