It's been an adventure!

Water
The pH has been refusing to stabilize as low as I want it. I get it down to the low 6's and it's back up to 8 the next day. I suspect it's because of the stuff the aquarium guy gave me. We won't be doing that again. So I was using vinegar to lower it, then it would pop right back up, then I'd be worried about adding more vinegar to the system (and wanting to purge whatever was buffering it so high) so I'd do a water change, and the cycle would start over. I even threw out my back during the last water change. So, I posted my concern on the AquaponicsHQ forum and Crusty is helping me. He's suggested I stop fiddling with it for a while and just monitor and post.

On the positive side, I'm FINALLY getting signs of Nitrates! I've had no measurable ammonia, nitrites, or nitrates. And starting yesterday morning I'm getting definite confirmation of a working cycle. Yay!!!

I also put some plastic mesh filter material under the water outflow in the growbeds, to filter out any solid matter... though I can't see how it would get through the filterbag I've got over the water pump in the fish tank. But everyone keeps saying you need to filter up there, so I'm doing it. If I don't have anything stinky in those new filters next month, I'll probably conclude that I don't need that in my particular set up.

I'm now up to about 35 fish. And they're happy and healthy and flitting around like crazy. No deaths so far since the very beginning. (Knock wood.) 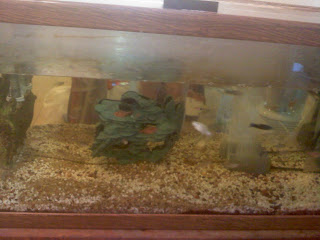 The basil is still growing very well. The tomatoes, parsley, and dill plants I gave up on. The seeds I've had sporadic semi-success with. I'm sure a lot of the difficulty is the drastic water quality fluctuations. The garlic chives are doing the best. And I'm starting to have some hope for the cilantro. Other than that, things aren't looking so good. In fact, I suspect I'll be removing most of the rockwool. (Which also causes high pH, so removing it can only help the water problems.) I'll probably plant some more seeds this coming week, but I'm not yet sure what I'll plant them in. 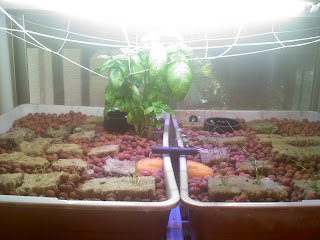 Comment by TCLynx on August 8, 2010 at 6:32pm
Again, I think your trouble is more likely to do with the aquarium gravel than the rock wool since you were having the high pH issue before you started using the rock wool.

Scoop some of your aquarium gravel out and strain off the water so you can add vinegar to a cup of the aquarium gravel. If it starts fizzing big time, then it is probably the cause of your high pH and nothing will really lower your system pH till the buffer is either dissolved or removed. If it is the aquarium gravel causing your issues, then I would recommend removing it but keep some on hand to add as needed to keep the pH from dropping too low.