The weather finally warmed up enough, and I had a few extra oomph of energy, so we got things going again.

The critter (type unknown) has been ravaging the plants.  As soon as the broccoli gets the slightest growth he eats it.  It looks like someone attacked the poor plant with a weed wacker.  And the little *^$% is too wily to step into the rat trap.  But my dad is going to help us put up a "real" greenhouse, so that'll fix the problem.  When we finally get around to doing it.

Meanwhile, the tilapia are big - probably big enough to eat by now.  And today we got the raft bed and the half barrels hooked up and all the plumbing works beautifully.  Except we're one outlet short as long as the heater is plugged in, which it still needs to be for at least another few weeks.

Remember the tomatoes I'd pulled out, and how the ones that went *splat* seeded the whole bed with plants?  Well evidently one fell into a crack in the cement, because we have a tomato plant there now, complete with tomatoes! 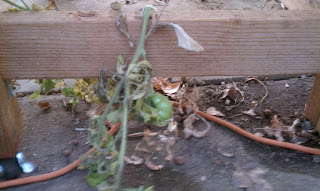 We also bought some plants at the nursery today, just to get the system back in balance.  Yes, I'd rather start from seed.  Yes, if I'm going to use plants I'd prefer organically grown ones.  But for now I had to get *something* in there to keep the fish healthy.  So we got Early Girl, Sweet 100, and Roma tomatoes; two cilantro (can one ever have too much cilantro?); sweet basil, two strawberry, and a lettuce. 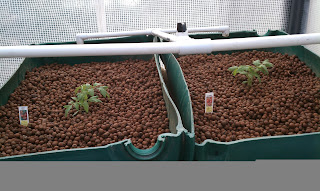 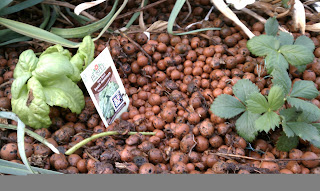 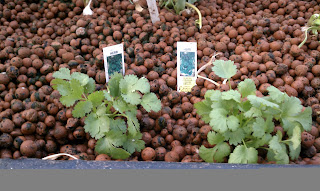 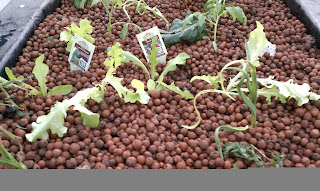 And here's the long view of the whole thing finally set up!  We'll get the rafts in probably next weekend.  And I'll start some seeds for that. 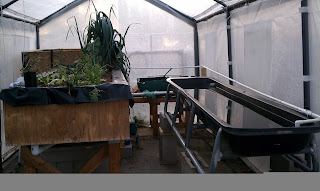 (That tall, dark green thing is a bunch of overgrown leeks.  Oh my goodness do the leeks love aquaponics!  And they taste fantastic!)

More updates more frequently, now that it's getting fun again.  Thanks, everyone, for sticking around!