Here's a salad I made a few days back using some cucumber from a coworker's garden, plus lots of goodies out of mine including the basil flowers I've been pinching back. 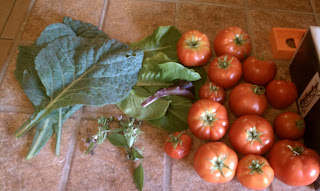 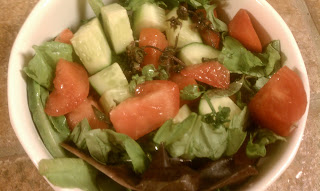 I built a simple earwig trap by burying a container with some vegetable oil in it, and the bugs are merrily drowning themselves. 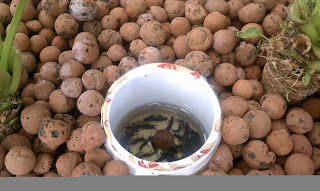 This has allowed the chard time to recover and it's growing back up nicely. 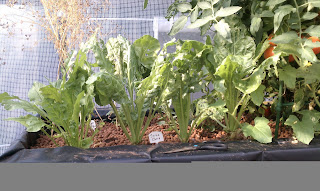 The coriander (from my first batch of cilantro which bolted) is drying and I'll probably harvest about half of it this weekend. 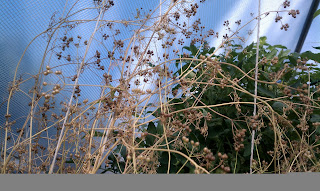 The carrot seeds didn't sprout, but my first 3 carrot plants from my prior planting are doing okay.  Not growing very quickly, but I have high hopes that they'll get there eventually.  And the brussels sprouts are doing better now that the earwigs are controlled.  The spinach sprouted a little but isn't growing much. 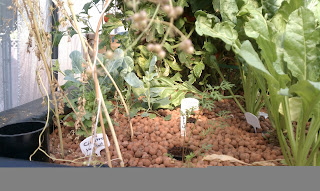 The basil and bell pepper plants I bought a few weeks ago are really happy!  Here's last week: 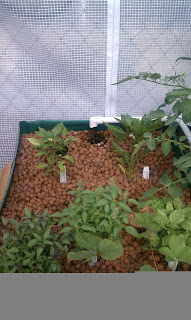 And here's this week: 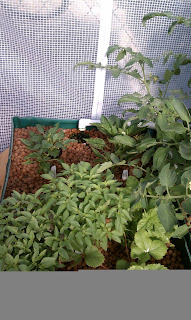 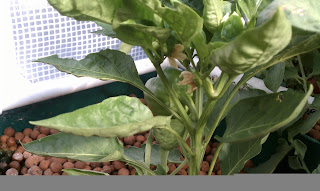 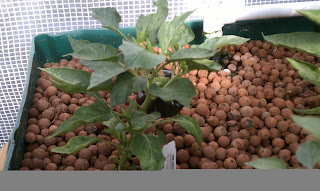 And the tomato plant next to it has recovered (finally!) from transplant shock.  In fact, it's escaped its cage so I'll truss it back up this weekend. 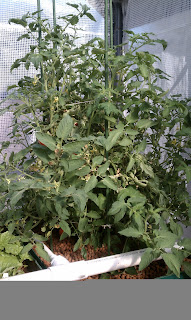 The savoy cabbage is big and has lovely dark green leaves, but hasn't produced anything that even looks like it will become a head.  I have no idea what that's about or what to do about it.  And the lettuce is growing like gangbusters. 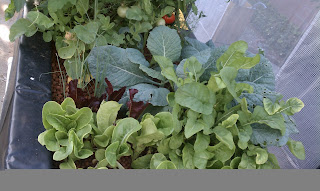 The dill also seems happy in its new home. 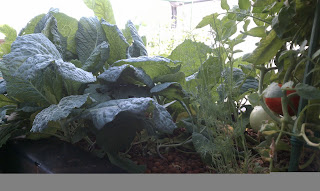 And the tomatoes.  OMG the tomatoes!  I picked a bunch this week, but I swear there are still 30 of them ripe or nearly ripe.  Here's just one small view of the most obvious ones.  (And the cucumber vine winding its way through.) 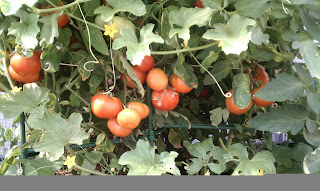 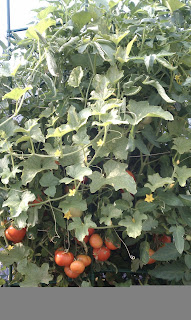 And the fish... they're eating about a cup of food a day.  I tested the water again yesterday and the ammonia is definitely rising too much, so I'll reduce them to one feeding a day until I get the rest of the growbeds built.  I should have the raft barrels hooked up this weekend, and the new 10 foot raft bed will be delivered on Monday so I'll get that done in the next week or two.  That will hopefully provide more bio area for conversion to nitrates.  I can't imagine what it would be like if I didn't have the moving bed biofilter going.  But even that doesn't seem to be enough.  And the fish are only half grown.  So I'll build the big raft bed, and maybe pour my extra hydroton into the bottom to help provide surface for nitrification.  Meanwhile, here are the fish!  (The black ones are hard to see, but the golden ones are visible enough.)