But meanwhile, I got one set completely built and hooked up.  And I've transfered 4 tomato plants into it.  And finally separated all the new little seedings into their own homes in the big bed (now that there's room).

For the new barrel-beds, I've gone to what will eventually be a sub-surface constant-flow system.  I've got a drain hole about 3" from the base, and I'm planning to run the water constantly so it just stays 3" full at all times.  Since I'm using clay media, the wicking action will provide all the necessary water and nutrients to the plants.  That's the theory anyway, as explained by one of the Aquaponics gurus I trust.  But I admit I'm nervous about this one.

I haven't converted the main bed yet.  So it will fill up to 8" before overflowing.  Because of that, I'm still running the 15 on / 45 off timer.  Also, since I (don't ask) installed drain piping smaller than I intended, I am not confident enough that the barrels won't flood.  Plus I haven't glued all of the PVC or properly tested for leaks yet.  So, to keep from accidentally losing enough water to run my pump dry, I'm sticking with the 15/45 for a while.

And honestly I'm wondering whether I should convert the big bed, or just run a small secondary pump from the sump into the new constant-flow beds.  One of the advantages would be that most of the solids are removed by the second sump.  The direct fishtank overflow, on the other hand, is at its dirtiest.  And Gary, the AP guru, strongly recommends removing solids.  Particularly in a constant flow system.  The main bed currently has a large filter pad between it and the fishtank, so the solids are being handled there (if crudely).  But the new beds don't have that built in.  If I feed those from the second sump, it solves that problem.  And I'm sure there are still more than enough nutrients in that water.  That's not a concern to me at all.

Another option (and probably a better one long term) is to run the overflow into some type of filter before returning it to its current path.  But honestly I can't face doing that right now.  I've got enough construction projects.  So I think for now I'll run it on its own pump.  That also ensures that the main bed continues to get the high volume of water it's used to.

Plus the second sump is where I planned to pull for my vertical towers when I put them in.  For those I definitely want to have the solids removed.  While the clay beds can handle it if they need to (though imperfectly) the towers really shouldn't.

And now for the pictures! 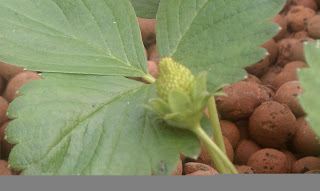 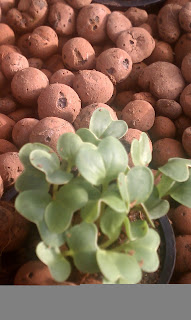 All seedlings ready to transplant:﻿ 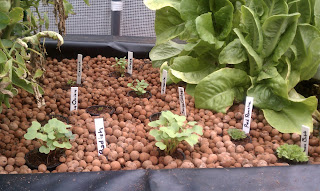 And a week later - more than ready: 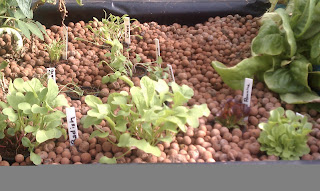 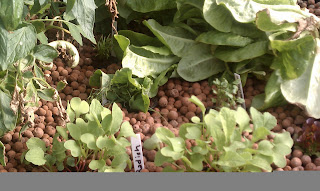 Tomatoes (I didn't hand polinate - obviously something got into the greenhouse and took care of it): 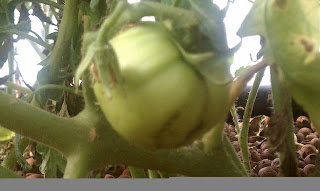 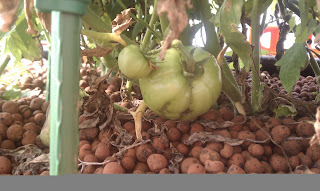 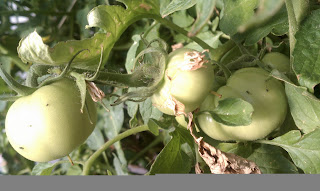 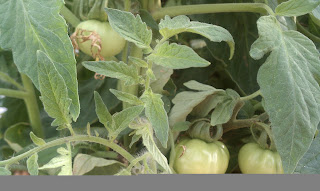 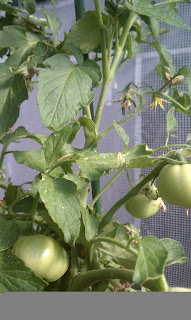 Swish chard darkening nicely.  I've been eating some and it's delicious: 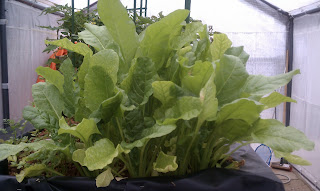 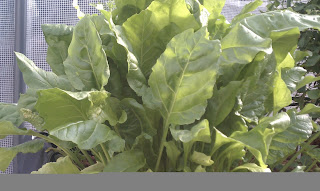 Overgrown lettuce before being thrown to the fish: 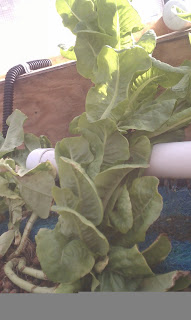 Yesterday's 2 being after 24 hours as fish snack: 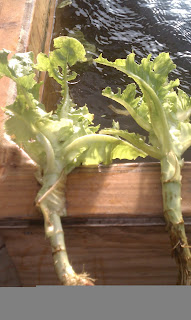 Okay, now on to the new barrel-beds!

I cut the barrels in half using my jig saw.  It was a lot easier than I'd feared: 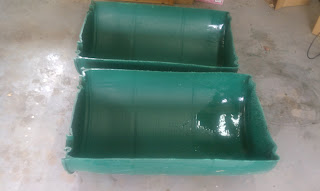 I purchased a chop saw at my local pawn shop.  I prefer not to use most power tools, as I'm a very small girl without a lot of muscle, and I don't like to use anything that dangerous unless I feel I can properly control it.  But the chop saw is completely stable and self-contained.  I'm really comfortable using it. 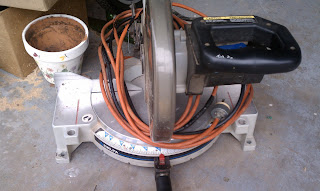 As evidenced by the mountain of lumber I plowed through 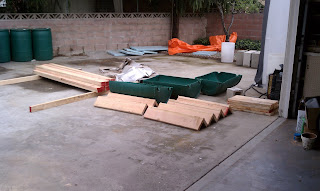 Here's the top of a frame, upside down while I attach the cross supports: 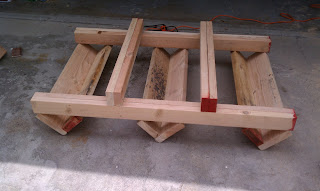 And here it is right side up: 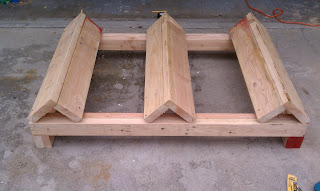 And with the legs and barrel halves: 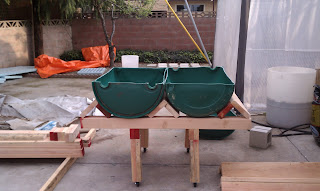 Sitting it its new home, filled with clay, and the beginning of the outflow: 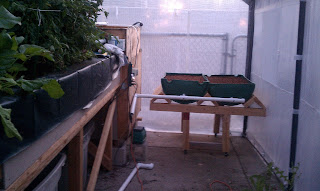 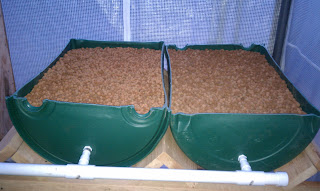 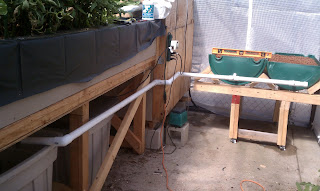 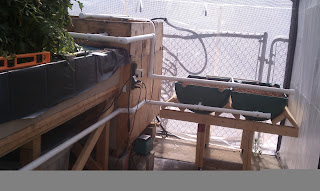 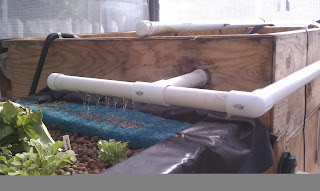 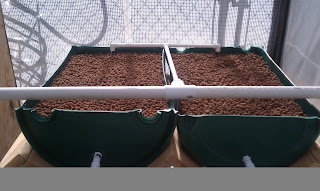 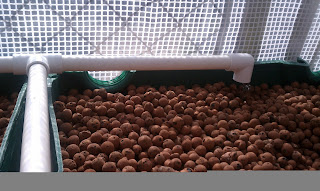 Tomatoes in their new home: 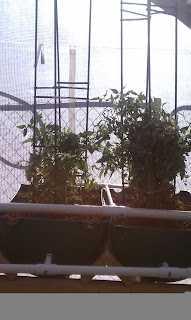 With all the additional cutting done (with help from my friend and her boyfriend on Saturday) I should be able to put another set together relatively easily.  Plus I've done all the complicated plumbing work, I just need to extend it to plug in new sets as I build them.

Though I do need to change the barrel outflow to a larger diameter pipe.  Sigh.  Next weekend.  :-)