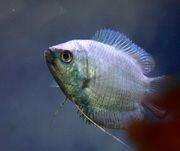 For those of us who have fish that we don't plan on eating.

I have a 64 sq. ft raft system. I am thinking to add guppies in the rafts. Why? Because they should clean the rafts of bugs + they are sold here in Costa Rica at a good prices. Is it a good idea or…Continue

You need to be a member of Ornamental Fish Growers to add comments!

Hey all.  Interesting group, Im surprised there isnt more activity here,  I've been experimenting with certain cichlids in my systems.  Namely Midas and Mayan as well as spotted tilapia.  Not surprisingly, they have proven to be less than ideal in my systems due to their aggressiveness and territorial nature.  As it is now, they are all in the same 400 gallon pond and the smaller/weaker ones have been weeded out by the more aggressive ones. This has lead to a low number of larger fish and ultimately malnutrition to the plants.

So long as the offspring are able to be removed from the systems and sold or fed off before they became too aggressive towards one another, I think this is feasible.

I know many tilapia based systems are run in a similar manner, but I dont think they are usually done with the intention of selling off the young.  This is also more tricky due to the mentioned aggressive nature of most other cichid species.  However, the possibility of income from the sale of the fish might make it worth while.

Boiled carrots might be good for boosting koi color, but beware uneaten food can foul water.

Comment by Ellen Roelofs on August 1, 2011 at 6:56am
Depends on what kind of fish, I expect. But almost anything will eat boiled zucchini, I've found. This time of year I feed my fish summer squashes and melon rinds.

Comment by Growitright Aquaponics on December 24, 2010 at 12:13pm
Interesting idea.  What other fruits or veggies do fish like?

Comment by Growitright Aquaponics on December 24, 2010 at 1:38am
Anyone have a favorite koi food?  I am brainstorming some ideas:  redworms,  soldier fly larvae, homegrown spirulina, etc...

Comment by Emma Lysyk on March 10, 2010 at 10:16pm
I figured that this might be a good place to post tips and tricks for ornamental fish, especially since there are some chemicals and methods we can use that those who will eat their fish can't.