The Door is Opening... aquaponics is the teaser!

It's surprising to me how often the answer is "aquaponics"....
Following the start of the first day of kindergarden for my granddaughter, I attended the "meet & greet" session in the multipurpose room with the new principal. In introducing himself he announced that he was looking for feedback on creating a theme for the school direction & curriculum. I had already noted that a school garden was listed by several parents, for a school project. Adding my two cents in, and a bit more, when I spoke with him I suggested aquaponics as a great vehicle, in our rural area, for pulling together science, math, biology, agriculture, etc. He was quite interested.
In speaking with a young woman, a waitress at a local blues BBQ in Virginia, I learned that she was a middle school science teacher, finishing her masters. We discussed the conference I was attending (AquaCulture) and that we wanted to add AquaPonics to our farm. She was fascinated... seeing the application immediately to her teaching science to 7th graders. Her questions were almost nonstop. The hands on real life applications of science! What a time in her students lives to make a difference.
A young man, working his way through college, working in the kitchen at the hotel where the AquaCulture conference was held, was looking in fascination at at the poster presentations. He told me his dad was thinking this would be a good thing to get into and wanted to know more. I suggested he "google" aquaponics as being very doable on a small scale (i.e. less than industrial sized).
Most surprising to me was a Doctor of Veterinarian medicine, who presented a paper at this conference on the contamination by heavy metals, from crayfish that had been recovered from the local canals, in Egypt. Crayfish escaped from an aquarium roughly 10 years ago and had become an invasive species in their canals. Looking at them as a potential food source (high protein), they collected over 500 and analyzed them only to find the shells and meat were concentrating heavy metals, some 10 times the human toxic level. The real concern was that the water they were living in came from their agricultural fields!
We sat at the airport waiting for our flights out, the doctor and several others, and I mentioned AP as a way around the contaminated water, for the vegetables and the fish/crayfish. He questioned me in-depth... This was a completely new concept for him. And the same request from a young engineer from Ethiopia... where can I get more information on this method?
It just feels like the tide is turning! Everywhere I turn I see opportunities to present AP as a potential solution to food safety, freedom from pesticide and chemical contamination, growing food in challenging areas with minimal water availability, freedom from long distance transportation issues, and of course, food that is actually harvested when it is ready (not green and then shipped)! Enhancing self-sufficiency and a clearer understanding of how the ecological world works.
I would love to hear about the different situations where aquaponics has been brought up. Have you run across other "like experiences"? Are there "doors" opening in your 'neck of the woods'?
It's an exciting time... it's not often one can offer a solution to multiple problems in one fell swoop!
amyd

Initially, my extension agent , actually 'found me'. She did some kind of a on-line 'search' at garden and aquaponics sites, ect. Since I go to 4 different aquaponic forums/sites pretty regular, I guess I was easy to find.
She started sending me emails about different gardening stuff , in and around central FL. That's how I found out about the Small Farms conference.

My friend and I were invited to go Fri eve, to a class that was primarily for the state's extension personnel.
They were trying to 'define' Urban Farming.....and all the 'things' ...issues, problems, transportation of local grown (urban) food to areas that are considered 'food deserts', ect, that might be involved with it.
They really are trying to promote urban farming here, but, they said lots of other areas of the country are further ahead
The 'nutshell' definition, they gave was....'commercial gardening within a city's limmits'

You wrote... How did the people attending know to ask you about AP?
Everyone had name tags... and what county we were from. Plus, mine was a 'vendors tag'....showing that I was at the Backwater Provisions booth, selling aquaponic set ups.
When people saw the tanks, they naturally were curious. That got the conversations going.

There were several vendors there, selling hydro set ups, of different kinds. Plus, lots of stuff geared to the 'organic' gardeners

Comment by Amy D Crawford on August 31, 2010 at 8:30pm
David, that is absolutely incredible... you must have an awesome "talk"! They certainly sound like they are doing everything they can to smooth out the path. I wonder what it is that makes the difference. Florida, right? It's been rough going there with the recession. Think maybe they see it as a way for people to help themselves? You guys are clearing the path, that's for sure.

And that conference says a lot as well; "Urban Farming" focus seems to have hit a rather large target audience. Either that or someone did a heck of a good job of publicity.

Do you happen to have a copy of the conference schedule? I'd be interested in sharing it with the california small farm conference folks. How did the people attending know to ask you about AP?

First, having the state certification for the operation will help you deal with any county regs more efficiently, and may even exempt you from some requirements. But of course you need to learn as much as you can about everything before you go ahead with it all and select a permanent site.

(Co tax collector) said that if you were selling only whole fish on farm, or to restaurants, or to seafood markets, that you’d probably be exempt from even needing a county business tax receipt (bus. license), because there is no tax on raw food. But if you wanted, he could give you one with an exemption (no fee required) if you needed it to open a bank account, etc. to be legitimized as a business. You’ll need to have your certification before you apply for anything with co.

As for zoning, it gets more complicated, but I was surprised at how much flexibility there may actually be, even on residentially zoned land. For example, if an activity isn’t a “permitted” activity, it may still be a “ conditional” and allowed activity. You both really need to call county zoning with your addresses and property tax ID #, and maybe specify what you want to do, so they can give you some idea of what would be allowed. (I spoke with............... She did mention that if you were already classified as an ag operation (that would be your Fl. Dept of Ag certification), then that may even trump local zoning regs !

There was at least a 1,000 people at the conference. The class room for the the aquaponics class was too small....plus there were 3 or 4 other classes goig on at the same time.
The pictures show ....about 1/2 of the people, while Will Allen was speaking. The other is, Jon Billings and I hanging out at his Backwater Provisions display. That was fun, I spent the weekend with him, his wife Cat and their two great little boys. I sure shook a lot of hands and talked about / explained aquaponics all weekend ! 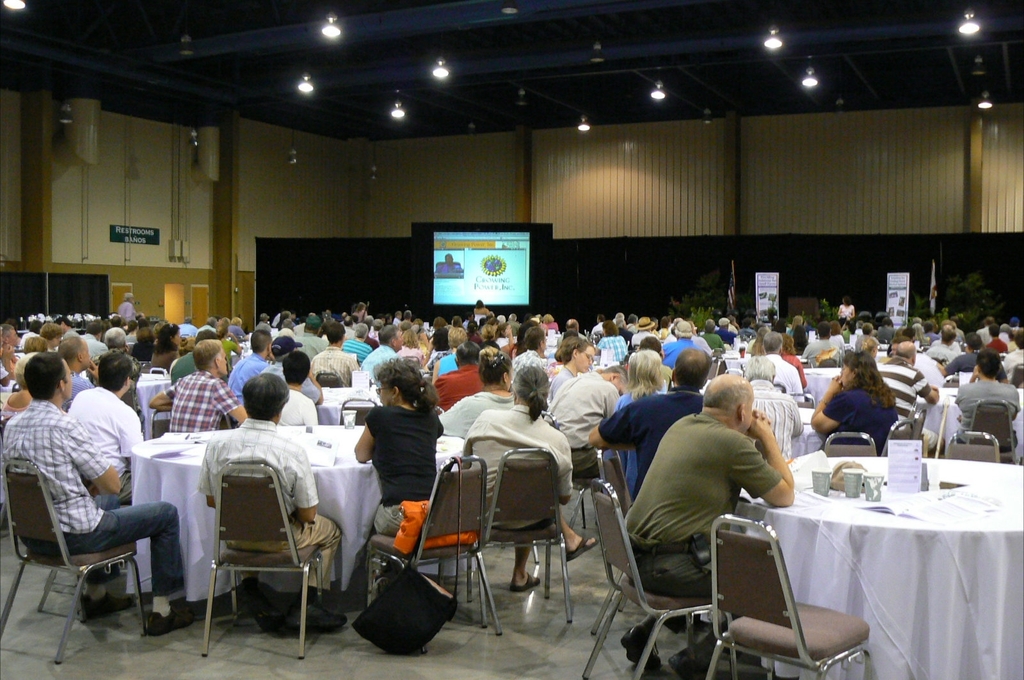 Wow, I wish I could have been there to hear Will Allen speak! It sounds like he's really put it together and is showing how well it can work. Powerful motivator!!!

How many people were at the conference? you had 150 in the aquaponics class? It just seems like people are really starting to look at the need to provide their own food. We had a small farms conference here in California (San Diego) this year and it was not near as useful - nothing on aquaponics. Even their greenhouse tour showcase huge industrial models with hundreds of acres of produce. So much for "small farms"!

It will be in the San Francisco Bay Area next year, so if I had my act together, I should get involved with the planning group and make sure aquaponics is included. time, energy, and follow-through.... Wonder if I could get any of the other california members involved. Have to see.

Found the meeting with the country extension office really interesting. It does seem like some critical mass has been hit. Now if we can just find a way to work WITH the bureaucracy so that things don't get adversarial, i.e. help them see what we need to make things workable.

Right now Tilapia is outlawed in northern california (although it is too cold for them to survive here, or so I've been told) and yet they can be grown/sold in southern california (which is much more suitable climate wise for them). I wonder sometimes if there is some "special interest" that has wangled the regulators to protect them.

If nothing else, Egypt could use the crayfish to monitor their water quality!!!! or lack thereof. I actually wondered if, in a small system, the crayfish could be used to "clean" the water. Didn't realize that duckweed could do it. But then what do you do with the duckweed that has sucked up all the "yuck". (same problem with the crayfish... what to do with them after they die from the toxic overload.)

thanks for sharing the links... I'll take a look at them.

Comment by David Hart on August 31, 2010 at 10:10am
We just had a 'small farms conferance' here in Fl. My county was the host. It's theme was 'urban farming'...the key note speaker was Will Allen.
I attended one of the classes called 'aquaponics and aquaculture'. When the speaker on aquaponics finished and asked for questions....about 140 hands out of 150 went up. Of course the 1st question was....how many fish can I grow in a gallon of water ?
Syilvia...I could of sold at least 100 copies of 'both' of Murray's video's...at the end of the class :-)


It seems like I keep meeting and talking to more and more people about aquaponics.
My friend and I just met with a lady from our county's extension office. For every question we asked about regulations...she asked 2 or 3 on aquaponics. She wants to come see our set up (once we have more done) and bring some of her co-workers.

It's a shame that Egypt doesn't pre-treat any run off first. One way is with, 'plain old' duck weed, which even takes heavy metals out of the water.
I believe it was Syilvia, who (first) posted this great link, on the benefits of duckweed. Which include, cleaning up waste water, removal of heavy metals, feed for fish, cows, chickens and humans. Being used as a fertilizer and even in mosquito control....
http://www.fao.org/Ag/AGAInfo/resources/documents/DW/Dw2.htm