I'm going to add this as a blog and discussion in the group, but thought that I might get some more ideas if it is "out there" in the whole group.

It struck me the other day that we have pieced together a lot around mixed aquaponic design without dedicating any discussion to the thinking behind mixed aquaponic systems at all.  A picture of my system, ever evolving, adorns the group page but what is it all about really?

Well, to start off with, here what it is not.  It is not a Friendly/UVI style raft-based or Dr Lennard’s calculator-based media system in terms of scaling.  It is not a barrelponics unit and it is not any other possible kit that is out there.  A mixed system, my mixed system, is a unit containing elements of aquaponics in scales or ratios that is still rather ill defined to say the least.  In this discussion, I would like to list what motivates my design thoughts, and then I would like to encourage feedback from all the members.  I do not want to dictate, thus it is up to the individual member to decide what he or she thinks a mixed design system ultimately represents.  Here are some of my original motivators: 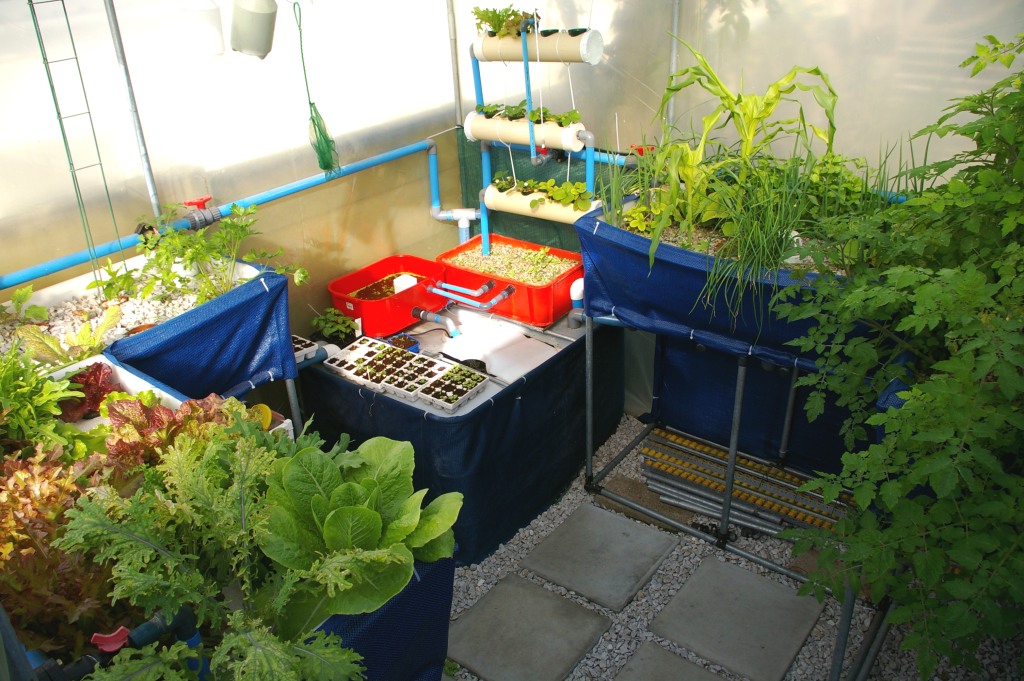 Throw it all together and I wanted a small footprint system with the filtration and nitrification characteristics of a media bed unit and the growing capacity of raft/NFT.  In time, some more thoughts came about.

Raised beds: Raised beds allow for space underneath to be utilized for all kinds of things.  In my unit, I work with a steel support structure and the space underneath was first just storage space or empty.  Then I got the idea to add some bio-filtration capacity by adding filters underneath some of the beds.  The raised beds also allow the cascade aeration I like to use to be more effective.

Sand beds: This is a new development for me.  My gravel beds are completely effective for mineralization and nitrification (more about this later) and therefore I can play with additional media options that are not crucial for filtration but act only as a growth media.

In the end, I realised that I was working with a “core and periphery” type design here.  Some components are crucial to my system’s functioning, while the rest are there to exploit the growing capacity of the space and the nutrients in the water.  For me the “core” is the fish tank (I have no sump) and the media beds operating continually to act as filtration, mineralization and aeration zones.  The periphery is everything else I can shove into the system’s footprint. The graphic below represents what I see as "core" and "peripheral functions of my unit. 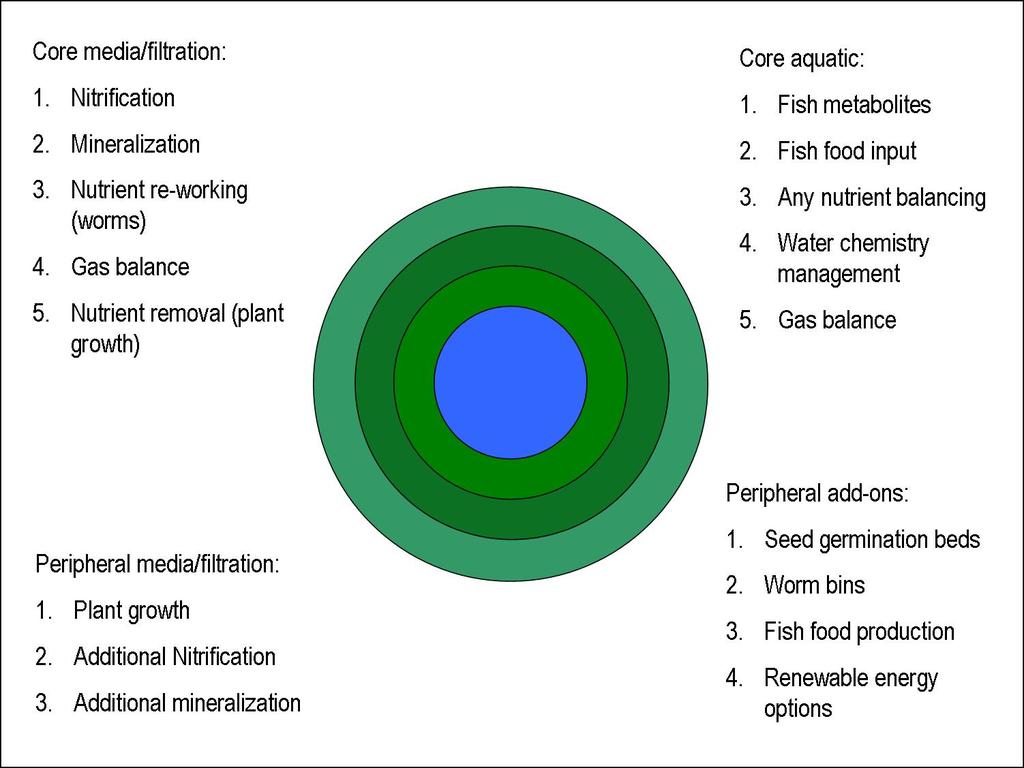 In my unit, the media beds were scaled according to Dr. Lennard’s calculator.  This means that the system, stripped of everything else, is still likely to be stable if there was only the fish tank and three gravel beds as structures.  The core is therefore stable, but small, allowing for peripheral, high density structures to try to maximise the use of the nutrient enriched water.  The image below is a representation of what I see as "core" and "peripheral" structures in a system such as mine. As peripheral structures, I have had a raft bed before, which has now become the sand bed, a small always flooded gravel bed for watercress, a small media-less bin for duckweed (it holds just a snack volume, not sufficient to replace feeds), NFT, the bio-filter, a stacked NFT that is about to come out to be replaced with four compact towers.  The bio-filter was born from an observation that the fine particles in the water stream makes it through the gravel.  I wanted to trap this somewhere and hence the attachment of the filter next to the fish tank.

As stated before, I wanted to cram a lot of growing capacity in a small space.  My original goal was 40 tilapia and 200 plants in a footprint of 3 square meters.  I have attained this in bursts but have never been able to sustain it due to a number of different issues – lighting inside the space becoming insufficient, structures not performing optimally, etc.  The addition of the sand bed and the four compact towers, each capable (in theory) to support 12 plants, are bringing me closer to that original design goal again.  Anyone interested to add thoughts or ask questions is welcome to throw it out there.

I don't quite design my systems based on Dr Lennard’s calculator since I've found that volume of grow bed is also a pretty simple/effective measure of filtration, not just top surface area.  And deep grow beds may provide plenty of filtration while still possibly allowing enough nutrients to be left over to feed the "add ons"

But it does make sense.

Comment by Kobus Jooste on May 19, 2011 at 12:01am
Thanks - still refining the thoughts but I think I have a working concept of how to explain my system.  If it sounds logical to people with similar units then I'm even happier!

It does explain how much of my systems been working.  The fish tank and main grow beds are the core for my big system too and then I too have "add on" elements, my NFT pipes and the raft beds and my constant flood bins for water chestnuts and watercress (each to their own season it seems.)  And then adding towers and seedling areas and so on.