I was hoping to show a new system that we made for a community learning centre in Northern Japan. This had been set up in Minamisanriku, a town that had been practically wiped off the map by last year's earthquake and tsunami.

We had the support of the Australia and New Zealand Chamber of Commerce in Japan and several other groups, but we also have to thank two members of this forum who wish to remain anonymous, but who made a significant donation to the project - THANKYOU for your support.

We were told that we only had a space the size of a wardrobe... and so that is exactly what we went with!... but we were able to build a small aquaponics unit to demonstrate how aquaponics works.

We used a heavily modified IKEA wardrobe as the frame for the system - it needed a lot of extra support, but other than that it seemed a perfect size. We wanted to try to show a couple of different types of aquaponics and originally I tried to design something that had a media-bed, a floating raft and NFT - but there just wasn't enough room to have all three so we settled on a media bed and a floating raft. 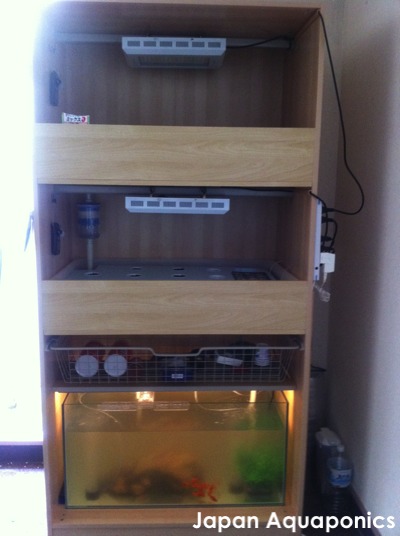 The design itself is very simple as we were asked to make it so that it could be easily used by the local children. With this in mind we tried to design the system with components that could be really easily found locally... so expect to see yoghurt pots instead of hydroponic net pots!

The fish tank is 220litres and the water is pumped from here up to the top growbed. We use a ball-valve bypass in order to control the flow of water to the top and to ensure that there is additional aeration and water flow in the fish tank. This fish tank has been decorated for the sake of the children and it is checked regularly to make sure that no solids are hiding out and building up anywhere!

The pipe to the pump is flexipipe so it is easy to check and clean the pump. There is a little pullout shelf about the fish tank for the kids to store the food and things like that. There is also a fixed shelf at the back that holds the aerator. The tank itself has two circular aeration stones in it. There are a dozen or so small fish in the tank which may be a little too much so we are watching ammonia levels carefully. Some children want to have their own little systems so we can take fish out of here if necessary. There is also a heater now in the tank as it gets pretty cold in northern Japan! 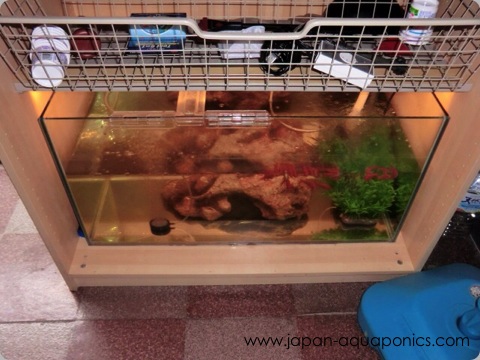 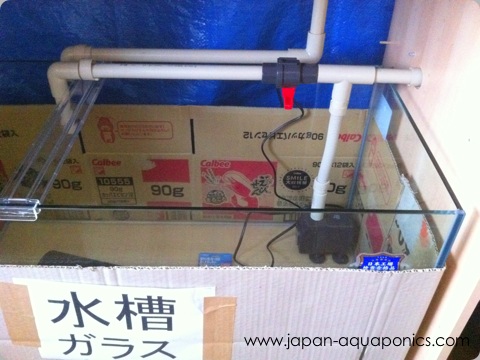 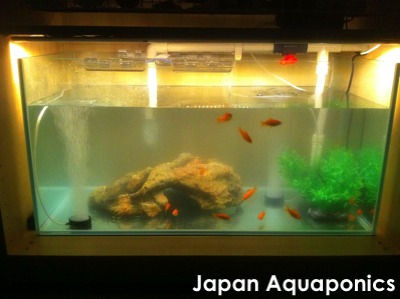 So the water goes from here up to the top growbed which is a media-filled bed. The media used was relatively small lava stone so that the children can easily plant in it. We are running this on a constant flood with the water an inch or so below the level of the lava stone as per usual. Currently they are growing baby leafy greens in here - just sprinkling the seeds over the surface. They harvest every three weeks at the moment. 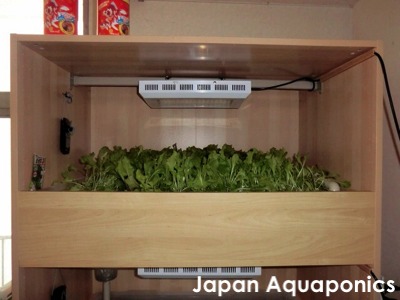 From here the water drains out to a really simple filter system to pick up any fine solids. This was made from a standard kitchen container that was attached to the outflow. In the bottom of the container is an upside down stainless steel mesh (usually used in the sink) and sitting on top of this are 4 layers of filter pads that have been cut down to size. The water flows easily through this simple filter and then exits to the raft system The raft system (DWC is easier to type so will say that... even though it is not that deep!) is just the standard container filled with water as you would expect. The water enters on the front left of the DWC and exits at the back right. The DWC has two oxygen pipes running down the centre of it to provide additional aeration to the plant roots.

The raft is a standard blue board cut down to size. We used yoghurt pots for this system as they are very easy to replace if necessary... we just used a small soldering iron to cut out holes in the bottom and sides of the pots. We have also included a seedling area on the right of the raft. This is just a standard seedling tray cut down and so it allows them to grow the main bunch of lettuce (11) whilst getting the next crop ready to go. The media is just either small lava rock or small hydroton pebbles. 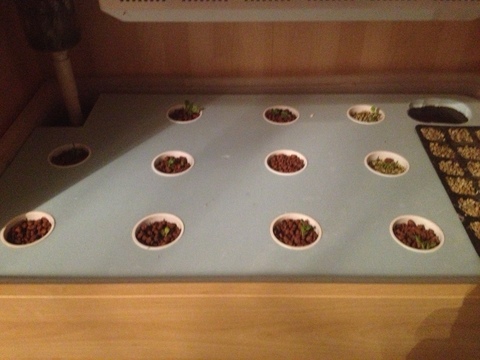 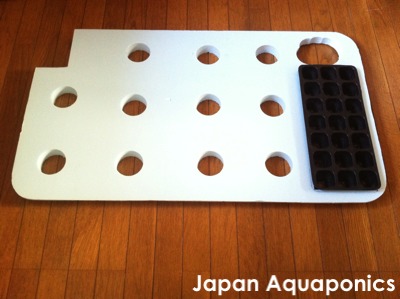 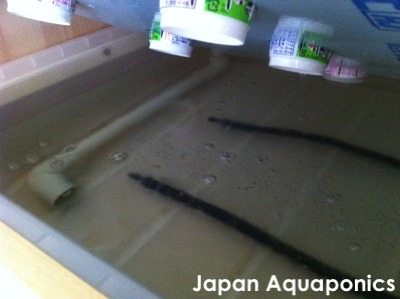 From here the water just drains back to the fish tank as you would expect. We have tried to make it so that the return water and the water from the ball-valve bypass help to push solid waste over to the pump.

We were very lucky for this project as we were given a 50% discount on some LED growlights for the system. These are really nice lights that have a low power draw - but which provide a really great light spectrum. When turned on it looks a bit like a plant "love hotel" (It's a Japanese thing!) but this can't be helped!! 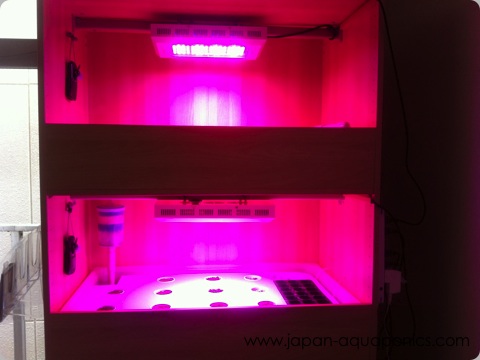 This was the first ever crop after three weeks in the top system. One idea is that the children have been designing labels for a project and they are going to ask local restaurants to buy the lettuce from them that they grow. This will more than pay for the system and will a little money left over for other projects. We really want to encourage this so that the children get something tangible out of the system, as well as the educational benefits.

If anyone is interested, here are some photos of the town as it looks today: It is amazing how little has been actually done towards rebuilding and reconstruction. There are a number of reasons, but one significant one is that the land in this area has dropped by almost 1m in some places! You can see how far the sea comes in these days, and so this poses big problems for infrastructure. But slowly we hope that things will improve and we will all keep supporting as best we can.  The greenery in the last picture is where a complete town used to stand. 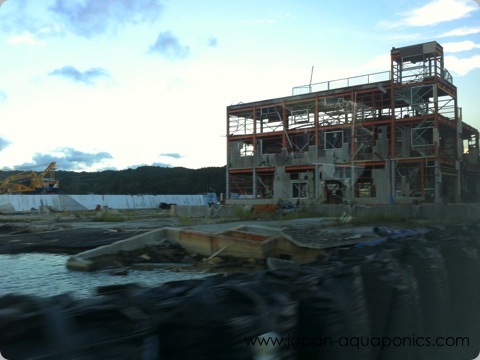 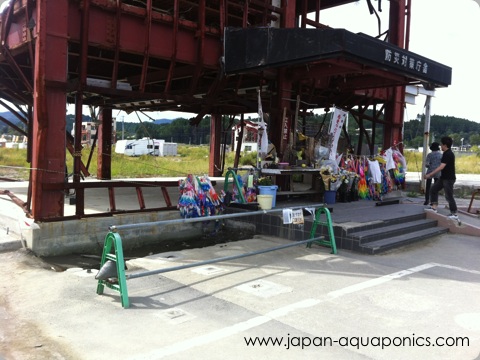 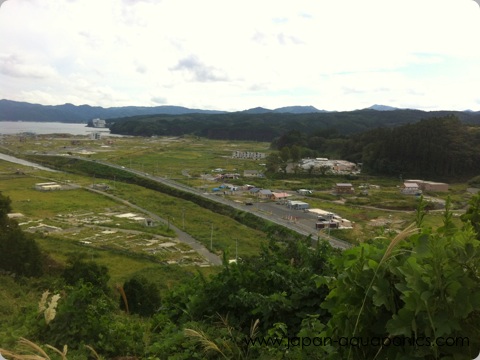 Final pictures are of my cheeky daughter and I after a long, and brilliant weekend installing the system and meeting with fantastic local people. So this is our little system, we hope you like it and would love to hear any feedback, thoughts or questions, and we will do our best to answer!

Hi, just wanted to say how much i enjoyed reading about your project. Amazing how you used a Ikea shelf and made it from there. And yes we love the picture of you and your daughter at the end! Great job and we hope that region of Japan learns from your project to inspire all children and adults alike. All the best to you! Greg McCord