Continuing refinement of my micro-system.

I got lucky today, gfi an extension protected the outlet gfi (which powers the back-up aerator), so that layout on a single outlet does work.  I'm guessing from the flashing clocks that the power went out, and then came back on with lamps and growbed pumps both powered up at once, blowing the first breaker, but leaving the air pump running, working as a built in safety trip.  The fish all seem to be fine.  I drew out a line diagram of how it's laid out, and I've attached a photo, after working in cad all day, I can't bring myself to do any more of it at the moment.  As you can see, wiring a small system off a single standard cgfi outlet isn't difficult with this arrangement. This also gives a very clear picture of this system's straightforward arrangement. 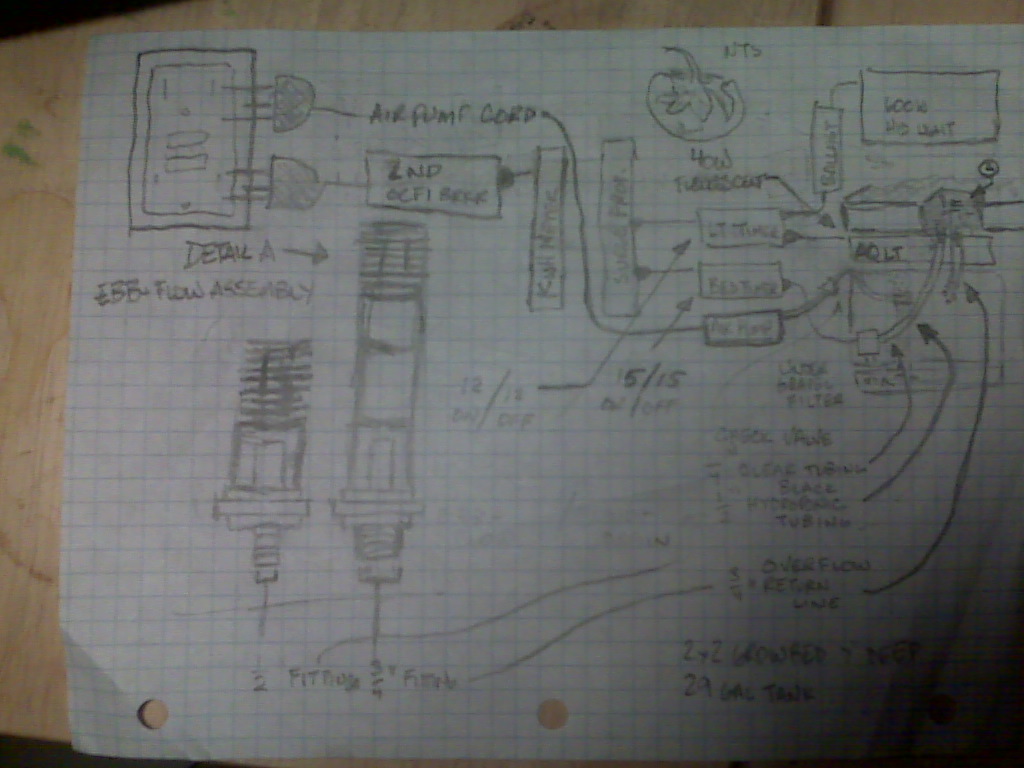 if you want to see the cost go to Week 2 @ yahoo.com or breakdown of specifics but know well, that the my plans for the growbed were overshadowed by my final work in school, and I killed those Tilapia through failure to pay attention to the tank. I then I moved the growbed downstairs where it belonged (after a disaster in the living room  previous blog post ). The yellow tomatoes are now living room size bonsai, and should be quite picturesque very soon. 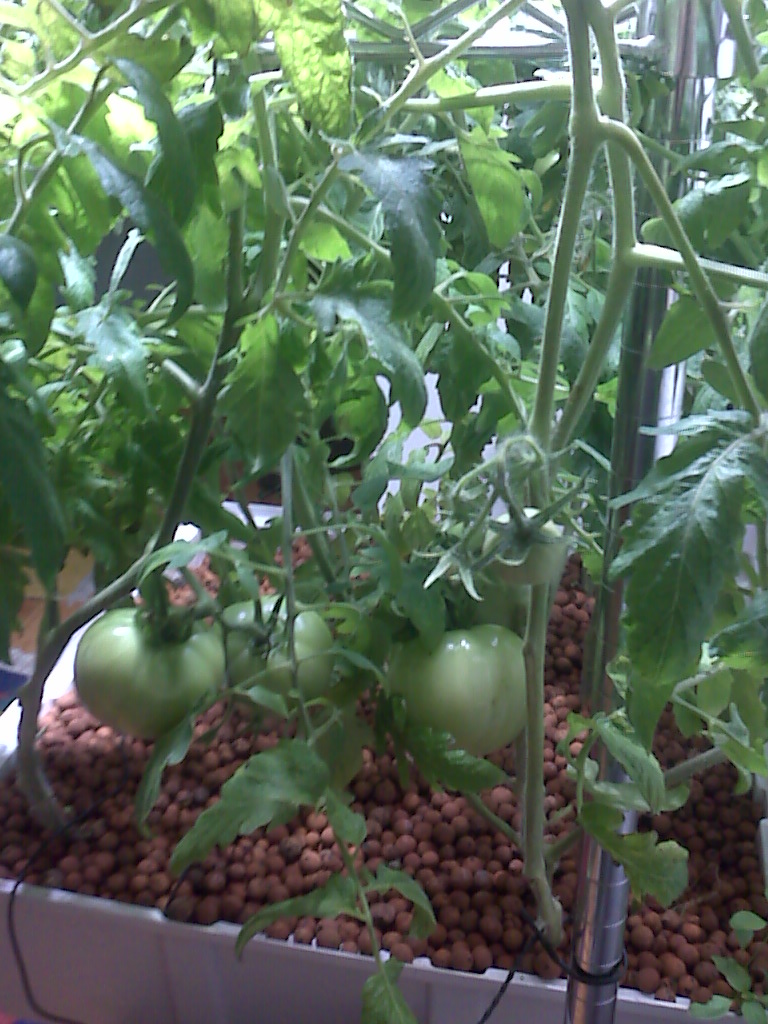 The biggest lesson that I've learned so far about growing tomatoes in this way too shallow grow bed and that the filters will get completely clogged with roots with the hydroton (grow media) right against them, I knew better, but I wanted to get the system together, and now have a silly maintenance issue.  In case you don't know...the roots grow into a solid mass with requires great force and thorough cleaning to remove, expect to break chopsticks.  With the installation of a piece of pvc around the fittings with holes in it (as is done many places here, here's an example in the upper left corner, PVC with holes cut into it to protect drain) I can resolve this problem.  The tomatoes have become bonsai to me, which is more fun, and frankly, its gone from science experiment to living interior art piece.  I know it's wrong.  I won't apologize for it.  I think my wife's going to get mad if I put the statue and candle of the Virgin of Guadalupe on the stand with it, but it will probably happen anyway. 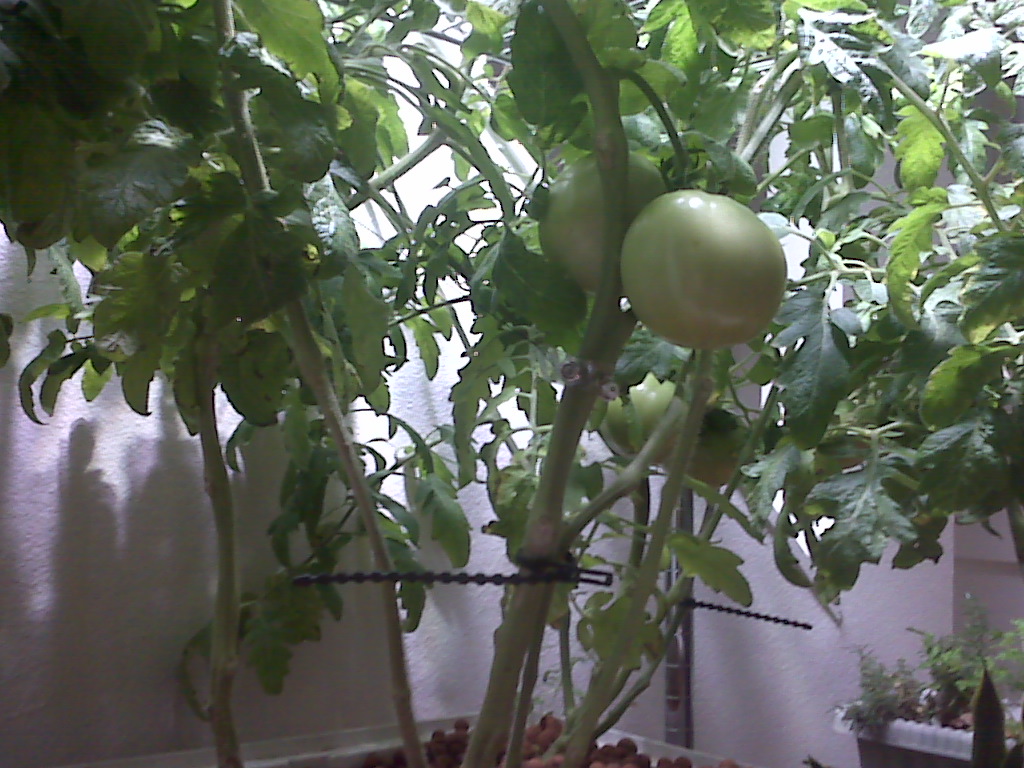 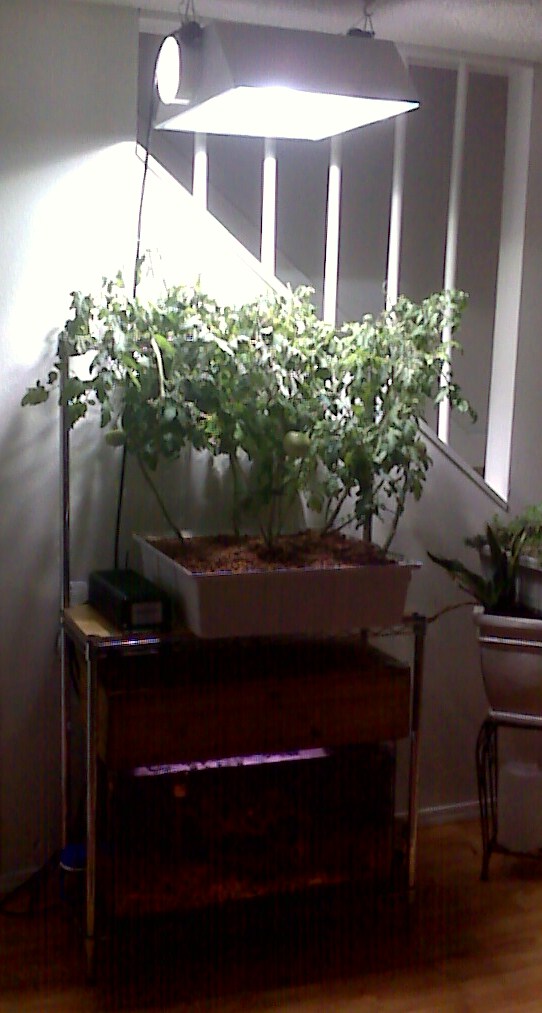 I just recently removed the second powerhead that was hooked up to that tank and the aquatic blubs (read Wal-Mart, cheapies, survivors - Apogenton I think) which were barely clinging to life are starting to fare much better.  Running with the aerator seemed like a more efficient choice and the tank is very well balanced and established, and since I don't have a battery backup I wanted to at least try and improve what I had in front of me.  I'm grateful it worked. 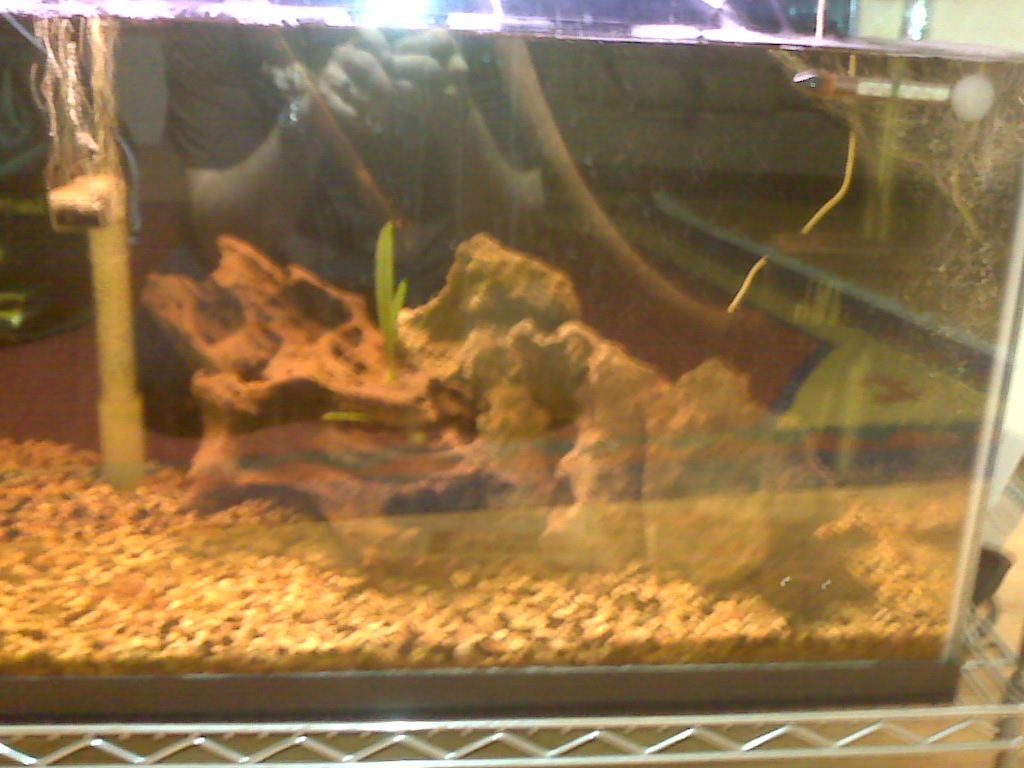 You can see the pleco's eyes, that doesn't happen very often, must've caught him mid-blink.

Comment by Sylvia Bernstein on January 16, 2011 at 3:23pm
Hey Dan.  Thursday is wide open for me, so just let me know when you want to come by.  And as much as it saddens me, I think that giving up my mature tilapia for a video on how to butcher and cook tilapia is actually a pretty great use of their lives.  I'm excited about the video in concept, but not sure I can watch it

Comment by Dan Brown on January 16, 2011 at 9:28am
Also - Growitright - what are you using for a raft bed?  In order to avoid a mess, it seems like you'd have to set it level with the tank, due to so much water being cycled out of the tank, and the potential for overflow.  I'm going to set my 20 up with my modified aerogarden, which is basically the same thing, only well under 1 sq ft of "raft" area.

Kobus - There is a decent sized Pleco (the one I mentioned before - about 12 cm), 6 (4-6 cm) cory cats, a couple of cherry barbs, and a small (7 cm) clown loach.  It's a 29 gallon (110 liter) tank.  Right now stocking is very light.  I'm going to move the tropicals to a 20, and switch the 29 over to being a fry tank for tilapia.  The 20 is going to get water today, and I may be ready to change occupants around before the week is out.  Could I swing by on Thursday and pick up a few fry Sylvia?  Do you want to sell me any of the mature Tilapia (like 4 of them) out of your system?  I want to make a cleaning and cooking video, and I'll pay market price for whole fish!

Growitright - Kobus was my source of information based on his experience with Plecos in a Tilapia tank, they did fine for him, and when I had my Tilapia die-off the Pleco was the survivor.  Ornamental sound like goldfish being used to maintain water lilies, but if I'm going to make design pieces, I guess that's the right place.

Very cool Dan.  Last night I rescued some baby plecos (1/4" to 3/4") and tetras from a soon to be abandoned 100 gallon tank.  I am interested in setting up a 1' x 4' raft system over the top of a 30 gallon tank in my living room.  When it's set up i plan on lighting it with t5 flourescents and using it to start seedlings to transfer to larger demo system or to backyard GH.  Am new to plecos, is there any info that I should know about these little critters?   Micro- system category would be cool but there is also an ornamental aquaponics group here also ;)

Comment by Kobus Jooste on January 15, 2011 at 1:25am
Maybe - (its own category that is).  Lovely plants.  How many fish are needed to run that system of yours?

Comment by Dan Brown on January 14, 2011 at 10:30pm
Thanks Sylvia...none of the rest of you have a word to say?  Do micro-systems need their own category?

Comment by Sylvia Bernstein on January 14, 2011 at 7:31am
Dan, thanks for sharing this!  Those are some pretty dang gorgeous tomato plants you have there but they are missing something...what could it be... oh yeah, definitely missing a statue and candle of the Virgin of the Guadalupe.