Building the core of my mixed system

When I first set this unit up, it comprised bites and pieces from a first trial unit that worked very well, but had to be moved.  It covered a larger area than what I had space for at home, thus the initial birth of my “cube quest”.  The system had a 1000 litre IBC and four gravel media beds in the new configuration.  The one media bed got used for all kinds of things – a DWC bed, a guppy fry tank and then back to raft before it got turned into the sand bed.  The other three have always been media beds.

The ratio was just about spot on for Dr Lennard’s calculator, and the system worked very well until I started pushing the stocking rate.  At this point, I could not maintain good water quality even though my yields were still alright.  I decided to expand the growing area, but without any sumps, the amount of flooding I could do was dictated by the fish tank size.  Adding too many plant structures would not work without additional water volume.  I started tinkering with additional sumps.  In the first sketch-up diagram all of the components forming the core of my design can be seen.  I still have not added the two barrel halves under the grow bed, but the rest is in place. The blue barrel (200 litre) turned on its side came first, followed by the recycled pool sand filter body.  Both of these contain floating media, while the peripheral growing structures are fed via a pump in the pool filter body.  The idea with the halved barrel sections is to fill them with gravel, and have the raised beds drain into them, from where they will overflow into the blue barrel sump.  The tall (150 litre) blue barrel will be connected with the unfiltered water line feeding from the IBC.  Water will be fed all the way to the bottom of the barrel, allowing it to rise through gravel and overflow into peripheral growing structures as filtered water.  This sump, as well as all the others, will not be cleaned.  In all, these structures have doubled my bio-filter and nitrification capacity, while only the half barrels will be planted. 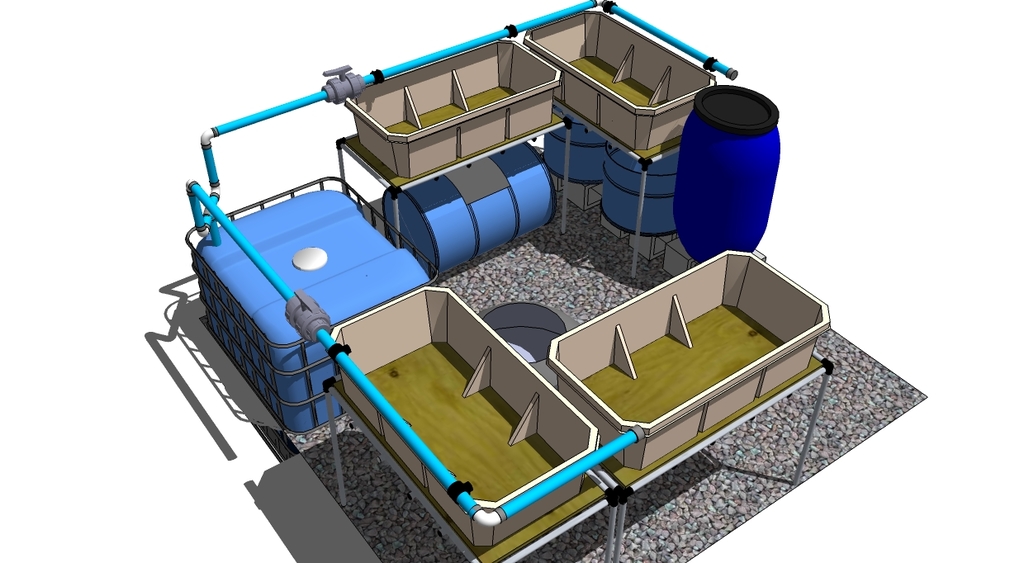 Thus, I now have a core of an IBC, four raised media beds and five additional structures slotted into the open spaces created by the raised beds.  I can stand in the centre of the greenhouse and reach each bed, which to me is an improvement on the expansive design I had before.  I used to run the system 24/7 when it was stocked to the max with fish, but now that I have lightened the load, both pumps are on timer.  There is no additional aeration in the IBC. Eventually, I may add another IBC to the unit, but I first want to see how well this system performs with only the original fish tank.

In the next addition, I will go into more detail about what have been added to the unit in order to further exploit the available spaces.

Comment by Kobus Jooste on August 29, 2011 at 10:06am
Terri, I'm not sure if my beds ever got that gunky but it is potentially an issue.  In the new design, all the sump / media structures below the gravel beds as well as the sand bed on top sees only a light load of solids or filtered water, which should make it a far more efficient system though.

Comment by Terri Mikkola on August 29, 2011 at 9:21am
The biofilm consists of both heterotrophs and autotrophs (nitrifiers). Heterotrophs grow at a faster rate than autotrophs and reside in the outer regions of the biofilm. If you increase the soluble and particulate BOD loading, as would be the case with an increased feeding regime, the heterotropic bacteria will dominate and increase the thickness of the outer layer of the biofilm making it difficult for oxygen, ammonia, and alkalinity to penetrate and be consumed by the nitrifiers. Eventually the nitrifiers will die off and be replaced by anaerobic bacteria due to the lack of oxygen. This is one reason why solids removal, upstream of the biofilter, is so essential for highly stocked systems.

Carey, I think it will work great - massive surface area but it does not seem to clog too easily.  Working on a plan to get my hands on some.

I think having the different pH attempt will be too complicated.  It will have to be huge and slow flowing not so?

The stuff Nate uses as media at : http://aquaponicscommunity.com/photo/worms-in-my-media?context=user

I'm thinking about using this media to grow algae and as a shrimp / mino nursery to be used as feed. What do you think?

Carey - The original design was simply a fish tank with four media beds to act as filter and grow bed.  This has worked well with a max density of 10 kg/ 1000 liter fish population.  I doubled it to see what happens but it was not my intention to keep such high densities in such a simple system - it was a response to a typically African attitude of the politicians here - how much can you get out a system.

The current expansion has floating media in the sumps, and then I will be adding 15 media filled towers (beads and vermiculite) and 3 gravel-filled bottom beds / upflow filters.  The total volume of non gravel bed structures will be around 450 liters with another 1000 liters of bed that will be planted.  I'm excluding the media towers because I must still calculate the volume each holds.  Bottom line is that my media to fish tank ratio will be around 1.5 : 1.

I'm still drawing up the final stages of the "cube", and are quite exited to see how it performs. I'll be starting with low density fish and moving up if I see I can.

I have to think a bit about the other questions - will reply soon.

Hey Kobus: No not oxygen depletion per say but oxygen using bacteria. The bottom line is that I think you might have too many fish verses plants and simply don't have the run off capacity.Well you are familiar with the concept of swimming ponds and how they work so my thought would be to boost the bio reactor capacity or run it off through extra curricular  growth (outside the greenhouse as feed) with either algae, duckweed  or an area of swamp plants if you want it to stay more nutral. The point is (if not over stocked); do you have enough surface area for algae growth and bacteria concentration/ environment (of the right type/s) for such a compact system?

I'm starting to wonder if we need separate systems of high, low and medium pH that join and mix in a mother system. Or am I just complicating things? I'm thinking about asking you to trying to use the type of media Nate uses. A micro filament screen would work much better but this stuff might be worth a try. BTW, where do you keep your bacteria colony?

Comment by Kobus Jooste on August 29, 2011 at 3:29am
Carey - Are you considering oxygen depletion as part of my initial problems? I ran the cascades full time during the experiment and the DO was at saturation in the cooler months and never went below 5 in summer.  The media beds were all flood and drain and therefore I never considered oxygen shortages as a possible issue with nitrification.  To me, the limit was my surface area and to a lesser degree pH.  Even at DO saturation I had ammonia left in the system.

Terri - My mind never went towards a change in microbial community structure with this one as a stand alone problem.  I always reasoned that I had developed insufficient space for nitrification bacteria with a lot of perrentials in the gravel and the fish load I had.  The low pH (dipping below 6.5 if I did not try to lift it or buffer it) also did not help create the ideal nitrification conditions for a heavily stocked system.  I considered the nitrification population reduced or suppressed, but not that I had an "ideal" nitrification environment that just could not cope with the fish load.

Do you think I lost nitrification bacteria for others?