As my Tilapia mature ...

My fingerling tilapia are beginning to mature, The 20 fingerlings were introduced to the empty fish tank in March and are growing bigger each day. (Some more than others)

- Is there a minimum age of the fish before they begin to breed?

- When can I expect them to start breeding?

- How will I know they are breeding?

- Is there an optimum water temperature for breeding to be encouraged?

All water quality levels, which I test every 2 days, are right on the money.

I would appreciate any and all information that can help in this process.

Hi Bob. Thanks for the careful analysis. It is greatly appreciated. May I provide an alternative one? Based on the photo above your fish may have some mossambicus in them, but their phenotype is primarily blue (Oreochromis aureus) though they are likely mixed with nile as well (O. niloticus). The dorsal fin spot is shared by many species in this clade  of fish as is the red belly in mating colors. But it is the iridescent blue head and color around the mouth and indistinct striping on the tail that are the characteristic of the blue tilapia. In the U.S. most blues are mixed with niles as a matter of practice to produce a superior fish. Also, the body shape particularly around the mouth is very indicative of the blue & nile tilapias as well. Here is a better picture of a hybrid adult:

We recently got a wonderful fish from Sheri that is a mix of all three as well.

@Dr.George - Your link does not works for me. So I Googled 'falcontilapiatrophy.jpg' and found quite a few pictures that look similar to this.

Fish identification is really difficult because as fish mature or change moods their colors and shape change.  For example I don't see the dorsal fin spot on my 8" fish, and as I recall they have shown bands on their bodies, but currently I don't see bands on either the 2" fish or the 8" fish.  Maybe they have to be happy or sad to have bands. Seriously they do change appearance according to mood.

As my fish matured their lips became more pronounced as shown here. 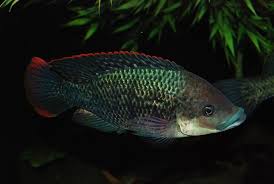 I got this picture from MonsterFishKeepers 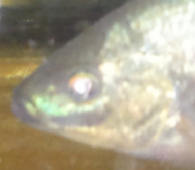 If you look at the pictures at MonsterishKeepers you will notice some of his fish have two lobes on the dorsal fin.  That would indicate to me that he has two different fish, but he indicates in the text that his fish are all Oreochromines.  I don't think that other fish is even a tilapia.

So I agree, it's most likely that I have some mix.  Thanks for helping me sort it out

Permalink Reply by Jon Parr on July 22, 2012 at 11:01am
Bob C, where did you get the tilapia? They look to me like California Salton Sea tilapia, which is about 80% mossambicus and 20% hornorum. The dorsal spot is common, an fades as the fish ages. Saltons have horizontal bands, blues and Niles have finer vertical stripes

Thanks Jon, that's the conclusion I have come to also.  California Salton Sea tilapia seems to be most likely.   Thank you for letting me know about the dorsal fin spot fading.  That too fits the fish I have.
I got them from another hobbyist.  He was not specif, but I'm happy with the way they are growing and reproducing.

I think you are referring to the pictures from MonsterFishKeepers.  Those are not my fish.

If it were not such a problem I'd take pictures of my larger fish for you now, but when I built my fish tank I gave little thought to observing or catching my fish.  When I build my third system I'll do it differently.

But I plan to keep these 2" fingerlings in the aquarium until they breed.  That should be somewhere around September, and I'll be sure to take lots of pictures.

@Bob Vento - Since it was you who first asked about breeding tilapia I hope you got your answer.  I seem to have hijacked your discussion.

Just a few days ago Jon Parr said 75F was about  where tilapia will start to breed, so yesterday I started to let my tanks warm up a little.  I had been keeping them at 75F and today I just measured 81F, and to my surprise those little fingerlings that where hatched in early May began to show their red breeding colors and behavior.

I've been saying 2" but I guess they are actually closer to 3".  Even so it's been less than three months.

I am in Florida and have Blue Tilapia since the others are not available for non licensed growers.

Hi Bob what state are you in? In Arizona I have not seen any Mozambique tilapia in a long time.  Hard to tell at that size and from the video what kind you have. Which of the fish below do the adults look like?:

The temp in my tank is between 80-85 degrees so they should be breeding soon.
Do I need to pump in some Barry White music to get them in the mood?

I started with about 20 tilapias about 3 weeks ago. They were smaller than 5 cm. And now they are about 10 cm long. They eat a lot!! I feed them about 5 + times a day. But now I'm feeding them less a day.

I just bought a pond and I hope they will soon start breeding! But I'm still trying to sex them....