A guide by one of the guys from another forum I frequent.

Calcium:
Leaves to show effects first: New
Mild deficiency: Smaller, distorted new leaf growth. Reduced leaf tissue, with the central vein persisting.
Leaves often cupped, rather than flat
Moderate deficiency: Often sudden bends or twisting of leaf, which is now much reduced in size.
White streaks or white edges in new growth. Roots are stubby and twisted. Root tips may die.
Leaves of Vallisneria are strongly crinkled as though they have tried to grow and got jammed in a small space.
Severe deficiency: New growth almost entirely white. Leaves are tiny deformed stumps. Growing points for both shoot and root die.
Damage and die off growing points.
Yellowish leaf edges.

Magnesium:
Leaves to show effects first: Old
Indicots: Yellowing of older leaves that starts from the edges inwards. The midrib may remain
green while the edges are yellowed or whitish and dying (I don't know what this deficiency looks like in monocots like Vallisneria, but it should involve death of the older leaves.)
Yellow spots.

Potassium:
Leaves to show effects first: Old
Small dead areas appear in older leaves. These can start like little pinpoints and grow. In some species, like Ceratopteris, the older leaves stay green while the little dead spots grow. The new leaves are reduced in size and leaf area, looking a bit 'singed'. In other species the older leaves can turn yellow before they die, but they do not have green persisting along the major veins as in magnesium deficiency.
Yellow areas, then withering of leave edges and tips.

Iron:
Leaves to show effects first: New
Reduced chlorophyll in new growth. Leaves and stem are about the same shade. Growing tips of Ceratophyllum become pinkish and then white. Egeria densa tips become greenish yellow to yellow with the leaves small and clasped close to the stem. The new leaves of swords are smaller with patches or broad streaks extending lengthwise that are more pale than the rest of the leaf (in mild deficiency). In more severe deficiency in most plants chlorophyll is lacking completely in the new growth which soon dies.
Leaves Turn Yellow.
Greenish nerves enclosing yellow leaf tissue.
First seen in fast growing plants.

Boron:
Leaves to show effects first: New
Very similar to calcium deficiency. New growth is distorted and smaller, and then the growing tips of both roots and shoots die. In mild deficiency in Crypts, the leaves are cupped and the roots are shorter and distorted.
Dead shoot tips, new side shoots also die.

Permalink Reply by Sylvia Bernstein on December 23, 2010 at 3:55pm
Nice one, Chi man.  Mind if I paste this onto a page and link it off the Rules page, or some such place?  This kind of info should be made available for future generations

This is very helpful. Great job!

Good document for understanding the workings of plant nutrition

Permalink Reply by David Waite on March 2, 2011 at 4:00am
Great post Chi. I always use a rule on tomatoes. Yellow on bottom is lack of Nitrogen. Yellow in middle of plant is lack of Magnesium. Yellow on top is lack of Iron.

Permalink Reply by Harold Sukhbir on March 2, 2011 at 8:40am
Hi Nathaniel,
This excerpt from the wiki article:
Plant nutrition is a difficult subject to understand completely, partially because of the variation between different plants and even between different species or individuals of a given clone. An element present at a low level may cause deficiency symptoms, while the same element at a higher level may cause toxicity. Further, deficiency of one element may present as symptoms of toxicity from another element. An abundance of one nutrient may cause a deficiency of another nutrient. Also a lowered availability of a given nutrient, such as SO2–4 can affect the uptake of another nutrient, such as NO3–. Also, K+ uptake can be influenced by the amount NH4+ available.[4

I have been studying the effects of "over abundance" of nutrient and it's effects. So far i haven't come across a comprehensive list but I'm finding the information piecemeal through various studies. If you do come across this list before i do please kindly share it with us as i will also.

Permalink Reply by Harold Sukhbir on March 2, 2011 at 8:45am
If we stick to standard AP component ratios, use a good quality fish feed,Utilize sufficient plant ratios,provide adequate oxygen and water movement, are careful with adding missing nutrient,do not overfeed fish, we can to a large extent control the occurrence of algal blooms. 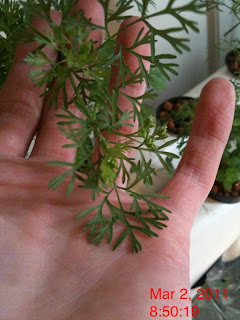 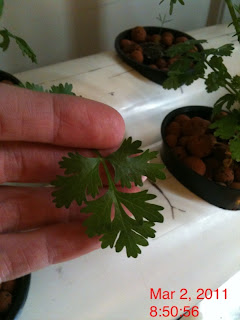 Permalink Reply by Harold Sukhbir on March 2, 2011 at 5:14pm
Hi Matt,
There are so many possibilities of what can be the cause of your problem.Even if someone has the same symptoms as yours the cause can be completely different.How long has the plant been in the system? Do you supplement nutrient? Whats your PH? How much nitrates are you registering? What are your DO readings? Sand filters are susceptible to going anerobic.Plants store nutrient in it's older parts so only the new leaves display deficiencies. Is it possible you can post some pics of the setup and give a brief description of your system and how you manage it?

It's been a while since I've grown cilantro, but I believe that happens when it's going to seed.