Here's an idea I came up with as an alternative to Styrofoam boards. I was just about to buy the 75 EPS foam boards (60cm X 120cm) that I thought I needed, but, luckily, I read somewhere about how they have an annoying tendency to disintegrate. Since I'm setting up my first system in Laos with the hope that small rural villages might be able to solve some of their malnutrition problems with inexpensive aquaponic systems, Styrofoam wasn't such a bright choice, anyway. A picture speaks a thousand words, so here is the Sketchup version. I'll explain further below the photo. 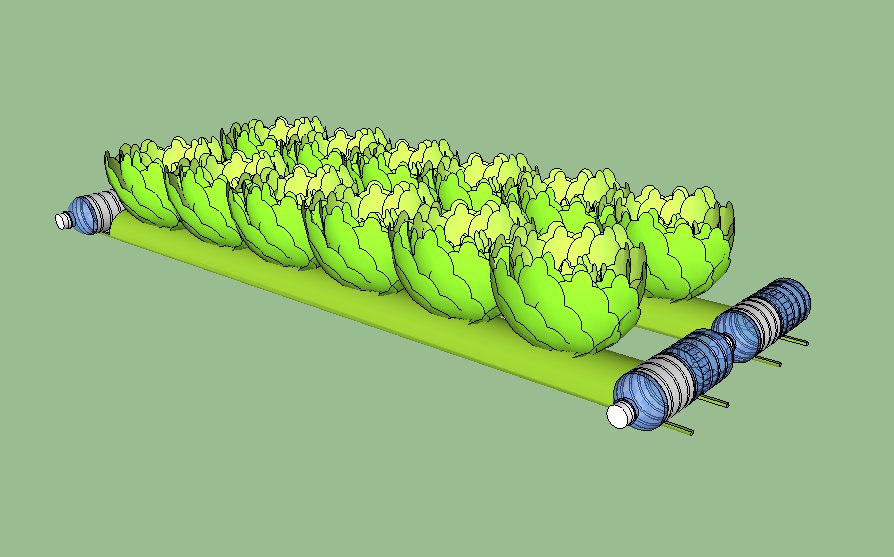 You take a bamboo culm that's about 8 to 10cm in diameter. My channels will be about 1.2m wide so that's the length you cut the bamboo. Having cut it, you then split it down the middle. Then make slits perpendicular to the halved culm about 8 to 10cm from the two ends. This slit should go down such that there is about 1cm remaining. Then split it again from the end to remove that bit. The two 1cm X 1cm pieces that stick out are what you attach the PET bottle to (rubber bands would do the job). I'm assuming a 600ml bottle will work nicely. Drill 6 equally spaced holes for your net pots. Done.

There are some obvious issues, such as the whole thing sinking as the plants grow. The way I'm thinking about approaching it is by adjusting the amount of air in the bottles. I'm pretty sure my 4cm deep net pots will just touch the surface of the water at the seedling stage, but if not, I could add some water to each of the bottles. As the plants grow and become heavier, remove the water. If necessary, when the plants get really heavy, just place a 300ml bottle or two somewhere along the underside of the culm between the plants. It'll pop right in there.

There is also the threat of the whole thing capsizing. If it gets a bit top heavy, you could just tack a strip of bamboo from one raft to the next.

Anybody see any other issues?

I have been looking for an alternative to poly board too,  we have lots of bamboo here in the DR.

If you can find removable zip ties (zip ties that unlock are hard to find but are out there) your on to a great idea.

Does bamboo have any effect on the PH?

I see you already reached out to http://www.norcalaquaponics.com/ I bet they have some good info regarding this.  When available i don't see why bamboo wouldn't be a great material to use.

Just an idea, would this be maybe less labor intensive to build and more flexible with net pot placement? Not sure if it would provide more surface shading with the bamboo inverted or not. Could always cover unused rows too.

I know some have been successful using plywood over their troughs instead of using rafts creating an air gap/high humidity zone. Has anyone done a side by side comparison to how this performs vs conventional raft w/ and w/o added aeration? I am aware rafts have the advantage of being less labor intensive as they can be move along during growth, but if you could use a suspended raft couldn't you get the best of both worlds (assuming there is a benefit)? Would depend on the construction cost of a bunch of bamboo, fastener, and the floats I guess. Also the algae growth might be a problem even with little exposure to light so that is one disadvantage. Dont know.

Permalink Reply by Jeremy K on August 4, 2012 at 1:24pm
I wish I could find some bamboo suitable for that type of use locally 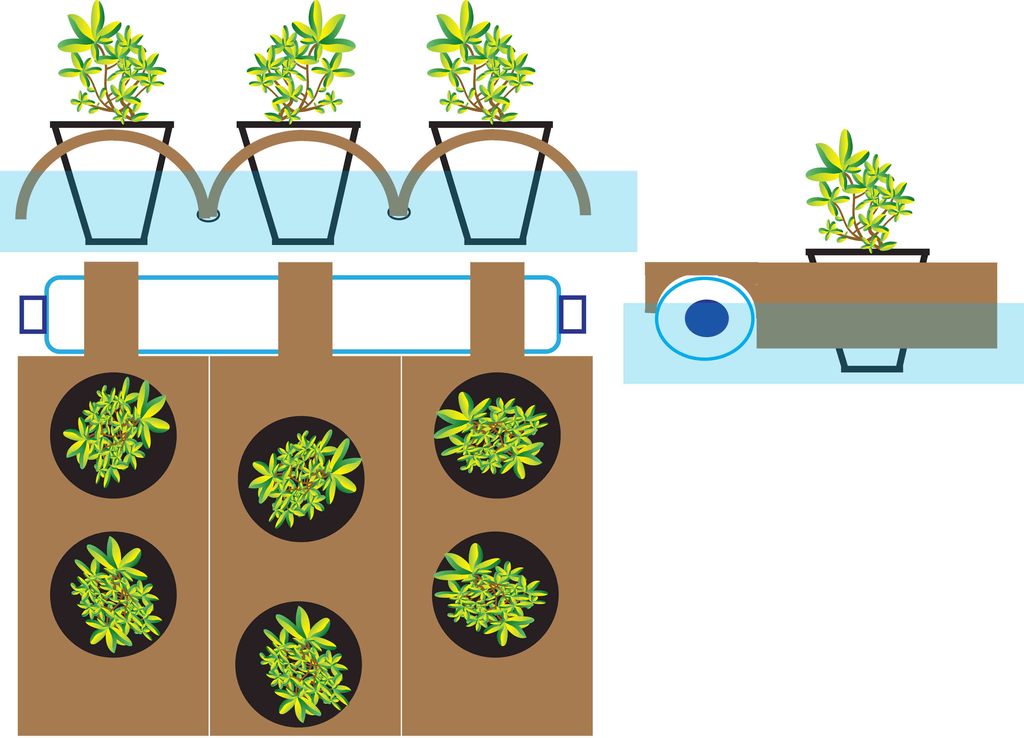 Wow, nice to hear from all of you. Where do I start? Okay, Vlad, the rafts will be on the water for hopefully 3 weeks but more likely 4 weeks. I'll check the integrity of the rubber bands. In Laos, however, they use strips of rubber inner tubes for almost anything you can imagine (securing hoses onto water taps, etc.). Good old fashioned string might work, too. I'll experiment. Stuart, it's not easy finding information about the PH of bamboo, although there is tons of information about soil PH for growing it. Regardless, I suspect there will be so little of it in contact with the water, compared to the common idea of a raft, that it won't be significant one way or the other. I like your illustration. Originally I was going to go with that but the spacing (not enough) didn't work out.  I'll consider doing that with seedlings, though, during their first week on the water. It goes against my desire to not have to muck about, though. I really just want to harvest from one end and add seedlings on the other. The way I've designed it I'll have about 8 inches between lettuce plants. Chris, the open gaps are certainly something I'll have to consider in terms of possible algae problems and perhaps a shorter life for the PVC pond liner that I'm going to use. I don't think there will be a problem during the last week of the lettuce's adventure on the water as they will provide the shade, but for where there are clearly open gaps in the earlier stages of growth I could always lay down some Styrofoam strips. They wouldn't be in contact with the water so they may last longer. Maybe even shade cloth would work. If I remember my UVI stuff correctly (not that I took their course) the physical contact of some sort of media on the surface of the water provides a lot more area for friendly bacteria to do their thing. There are issues of humidity escaping, and heat, as this will be in a greenhouse. Lots of stuff to think about. I'll be back to Vientiane in a few days. My uncle-in-law across the road fashions bamboo basket-like cages that people keep ducks and chickens (and sometimes their children) in. I'll beg him for a culm or two and do some playing around. They will surely be convinced I'm insane when I start making a few of these. But, seriously, I want to check out how stable they are and how deep they sink with a couple of bricks attached. If there was a good idea involved then it's the smaller bottles that can be conveniently shoved under the raft between the plants (8 inch spacing, 6 inch bottle). But, again, I don't want to have to muck about with the rafts during their journey. So, I'm now thinking, and will give it a test, about inserting these from the beginning between all the plants perhaps filled with just enough water so that at the beginning only the very bottom of the net pots touch the water, and maybe at the end of the trip when the lettuce is big and heavy maybe they are an inch or so lower, which isn't a problem. Of course, one knows that a liter of air in a bottle can support a kilogram, so I could do the math, but I've always been lazy and generally not very good at math. I'll take some pictures and let you know about the progress. It's pretty cool because I can go and get my own bamboo for free and all the other stuff is recycled and also free. I thought about the savings, considering I'd have to replace EPS foam frequently, and was so satisfied that I went out on the town last night, hence my late response.

Boy, I could have had a great night for the money i spent on foam!   i say dont cut the sides in half, just leave them whole. and drill holes in the split halves down the middle of the raft.  ...i have seen bamboo used in rafts, it does work. keep us posted.

Permalink Reply by Jon Parr on August 6, 2012 at 4:37pm
I wish I had a source of large bamboo locally, such a magnificent building material. I have seen bamboo rafts also, locally here in Cali and pictures from afar (China? I think), and it does work. Max Meyers of NorCal AP has used them for a long time, and there are problems like maintenance and splitting and sinking that happen, but still better than using styrofoam, IMO. Max even spoke of bamboo used as water pipes, with leaks wrapped in leather. I'll stick to PVC there. I agree with Rob, leave the sides whole for water contact (bacterial surface area) and flotation (skip the water bottles) and a filler in the middle drilled for net pots and sunblock. No idea about pH, but probably similar to wood; mildly acidifying. Richard, the way you have the raft drawn, it is really using the water bottles as floatation, right? If so, it would also work to use most anything as a raft, like plywood, wood planks, etc, with emphasis on blocking light. Btw, sunlight is the cause of EPS decay, much more so than water contact. Bamboo child detention cells, however, are brilliant!