Ok if you read my last blog post, and mainly the comments, you know I am still waiting for items to come in and I ran into a snag with the PCB hole spacing not being ideal for my ultra compact LED layout.

To review that is this layout

The problem is simple, if you place two LED's in with the anodes (positive side as indicated by the purple/pink circles above) all facing the same direction in one row, they will bunch up with anything greater than two. This is is bad because we want them to sit flush against the PCB so we know where the light will end up when we are done, where ever we point it :) The problem lies with the LED bumper, while flush on the cathode side it sticks out everywhere else.

So to rectify this situation I had two options, one was to stack them so the bumpers overlapped but after trying this I realized the end result will not be a desirable one. The second way is to remove the problem bumper on the anode side.

Originally I thought this would be a pain in the butt and grabbed every file in the house to see about removing it ... the hardest part was holding onto the slick epoxy LED shell >.br/>It was then I remembered back to my days when I use to assemble lab equipment and how I would remove the bumper back then.

With a razor blade at an angle from above ...


The procedure while easy is a little time consuming, yesterday I went through 500 LED's while watching / listening to things on my computer ...

What I did was first get one of the SINGLE square PCB's I ordered then grabbed one of the non-corrugated cardboard boxes they came in and poked two holes in it to slip the anode and cathode pins through. This was then slipped through two holes on the PCB and acted as a soft barrier so I wouldn't slice up the PCB in the process of "snapping" off this part of the bumper. 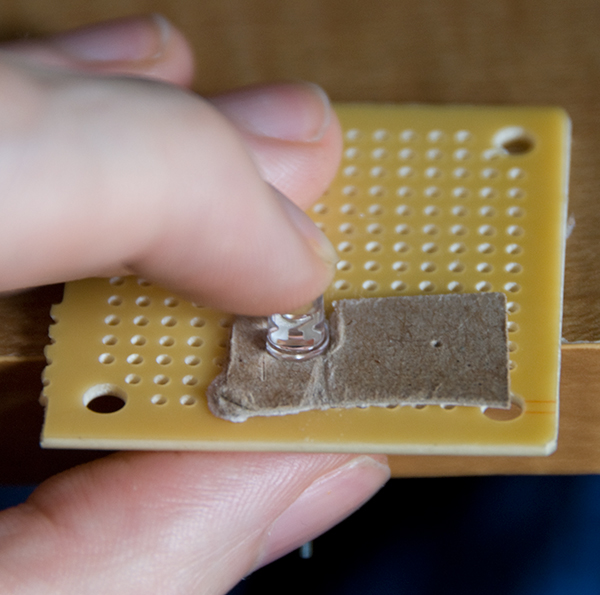 How I secure the LED for clipping in the PCB ... snipping right side of bumper only.

And if you do it right it will indeed snap off, versus slice, given the angle ...
So I have about 1000 LED's left ... I am identifying the amount of each LED I can skip this step on, you might ask how, by seeing if the anode sticks toward the outside on the image above. If it does, then you count each up and multiply by 40 to get the total count you can skip this step on.

you would think a pair of snips" would be easier however I think there is more room for error as you could expose the LED's bottom anode if the forces are wrong ... and LED's are too expensive to do this in my book

Cutting the last 400 of the LED's now then off to populate / solder them into place >.br/>
If everything goes right I will be done by the end of the weekend :D