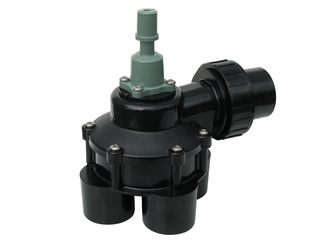 For a valve to operate properly a certain amount of flow and pressure is required at the valve in order to engage the valve to a particular zone fully. If there is not enough pressure/flow the valve may not engage fully to seal off the inactive zones and water will flow out all outlets and the valve will not index forward either.

The easiest way to install and utilize an indexing valve is on a simple system with multiple grow beds and the fish tank as the lowest point in the system with grow beds draining back to the fish tank and an appropriately sized pump drawing water from the fish tank and sending it to the indexing valve which would feed the grow beds in sequence. The pump would operate on a timer and the beds would have stand pipes with appropriately sized holes a the bases. With a simple system like this it is easy to have more grow beds than fish tank and not drain the fish tank down too low. Simply run the timer at appropriate intervals to allow the beds to drain enough before the next bed is flooded that the fish tank is only ever down the amount of water to flood between one and two grow beds. An inexpensive (though not too cheap) 15 minute mechanical interval timer can run a system this way just fine (provided the pump is not too big for the timer.) A repeat cycle timer is another option for controlling such a system.

It is also possible to run these valves from a pump on a float switch though it would probably not be in a single pump system. I am currently running a float controlled pump in a gravel filled "sump bed" that gets a constant inflow, when the water level triggers the float switch the pump turns on and feeds a line of grow beds in sequence. These grow beds then drain back to the rest of the system.

I have seen one picture of an install where they used a solenoid valve to control the flow to the indexing valve. I don't know the details of that install or how strong a pump they needed for it (or even if it is still working in good order.) Anyway, on that one they run the pump constantly to provide aeration by spraying back into the fish tank and they open the solenoid valve with a timer to feed the indexing valve. If I get more info on the particular install, I'll share.

And what about a CHIFT PIST or CHOP system, can it use an indexing valve? YES, but it is a little more complex.

To do the more traditional CHIFT PIST/CHOP system where the fish tank is the highest point and gets water directly from the pump and overflows to the grow beds which drain to the sump tank where the pump gets it's water, well that is the complex one, though it can be done, I've been doing it for over a year.

1-the water level in the fish tank being about 18" above the level of the indexing valve and surface of the grow beds.

4-a bypass overflow from the fish tank to some bed or filter that can get a constant large flow enough to keep the fish tank from overflowing when #2 is closed or if #2 were to fail closed. This overflow could be a large constant flow bed that then drains to the sump tank either by stand pipe, constant flood stand pipe, auto siphon or whatever other means. (I suppose you could have the overflow simply drain back to the sump tank but then there would be a certain amount of water not getting filtered/getting pumped back up to the fish tank and I personally really like a clean water sump for a CHIFT PIST or CHOP system.)

I will need to do a separate post about my means of #2 in this list. I think I was really brilliant in developing my automated low pressure valve even though there are other people who I must share credit with as well for giving me ideas and helping me with the electronics/controls.

I have also done some testing of the gravity modified valves with a flush tank type set up just to see if it would work. Perhaps a gravity modified 4 outlet 1 1/4" valve would work for a barrel ponics expansion if one were to lift up the flush tank an extra 12-18 inches but I've never tested this out on an actual system.

Please bear with me, I will have to post more pictures and perhaps some videos here at a later date.

I've got the most experience with gravity and low pressure operation of the valves so if you might need to go very minimal pressure with the valve, I might be able to help with layout and set up to hopefully assure the valve will work in your situation before you spend money on something that won't work.

Comment by TCLynx on November 23, 2010 at 9:23pm
To find out who your distributor is for Aquaponics Indexing Valves, click the Find Your Distributor Link here
Indexing valves Distributor Info