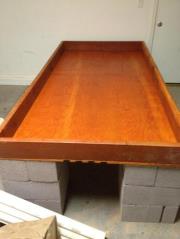 for an aquaponic system you simply need something holding the fish, something holding the plants and a way to transfer water between them.  that really is all there is to it.  you can use a fish tank and a planter box...you can make boxes out of wood and line them with pond-liner (and old carpeting for insulation and padding)....or you can buy ibc totes and blue barrels.  you can even buy one of those metal framed above ground pools from walmart and create a raft system.  There's a guy, Dr. George Brooks, who is on this site that has a system that way and he grows great veggies.  i don't do it that way because tilapia eat roots and plants so you can't have plants in the water with them.  but in his system he has his tilapia in these blue barrels that are in the water but in the remaining water he had big sucker fish and guppies or something else that's not a root eater cause in the raft system the veggies float on top of the water.  i'm eating my tilapia so i use the ibc setup.

anyway, we got the ibc tote because it's kind of an all in one, it has the box for the fish and the plants.  Here's a decent video that pretty much is exactly how ours is set up right now.  You just cut the tote in 1/3 for the grow bed and the remaining 2/3 you use for the fish.  you fill the fish one up with water.  you fill the plant box with the grow medium (rocks, hydroton, coco something) BUT first you have to figure out how you want the water to transfer back and forth.

jake used a bell siphon filter which is not hard.  it's made out of pvc and he cut slits in it.  there's a lot of different ways to do a bell siphon and tons of videos online but the boards on here have a ton of info too.

we are working on a new set up next week with an old refrigerator we had.  we were going to junk it but then we just gutted and pond-lined it.  we had to empty it because the first attempt got messy.  the water functions more like a pond and it was impossible to see through to the bottom cause the pond liner is black.  sooooo....we put all our fish back and now we are working on setting up a prawn system with our corn.  right now our ibc tote is growing corn but it's running out of growing space.  so we're going to transfer them to this system.  we're going to use blue barrels as the grow bed.  we went with the fridge because during the summer heat it insulates real well and has proven to stay cool.  pics will come up when we get this running.

ONE THING YOU WANT TO CONSIDER is placing some kind of netting system at the bottom of the tank that you can use to pull the fish to you.  you'll put the netting down THEN the water and then the fish and you 'll want it to be real small holes that fish can't escape from.  then hang the netting at the top in a fashion that all you have to do when you need to get one is grab the top of the netting and pull them to you.  they are a pain in the ass to catch.

we're working on something for our babies now.  we have a 55 gallon fish tank and a 20 gallon tank we just have our fry growing out in and now they are mainly fingerlings.  they are our first batch.  we started with 25, we actually got a ton of fry and eggs but they died  cause we made a ton of mistakes.  we have 70ish growing now between those tanks.

anyway, the fish growing is easier for me so far than the plant growing but hopefully we make some progress there in a week.  i'm going to post pics tonight.

Sorry switched internet providers and didn't have access for a while.  So I just recently got some worms right before your first email, but I don't know where they went....  I put them in a homemade bin, real small so I can have them composting my cooking scraps right next to my kitchen, and those suckers kept escaping out of the lid and dying on the floor.  So I put the bin on top of my aquaponic system and the next morning there were NONE to be found.  So I think they are all in my aquaponic system...lol.  I have corn and pumpkin growing well and I don't want to disturb the medium to find the worms.  Eventually I will go on a hunt for them.

This is as far as I have gone with vermi/aqua project, it kinda happened by accident. I started with just 1/8 of a lb of worms.  From what I understand, if they are still alive, they should be able to populate and self-regulate just fine.  And I should see an increase in the health and size of my veggies at some point.

So what exactly are you trying to learn about verm/aqua?  We currently have a tote setup.  We are working on another set up using a refrigerator and I should have pics up of that by next week.

Adam Hamilton said…
Thanks everyone for such a warm welcome to this community. I hope to learn a lot about aquaponics and specifically vermiponics from all of you. My main goal is landfill diversion, but growing great food crops in systems like these sounds fun and interesting. I have a worm farm, but have never actually seen a working vermiponics system. I hear they are the 8th wonder of the world. Ha ha. That was a joke, but I seriously have heard nothing but good things about these systems.

Great to meet you!  Perfect timing too.  So where on the west side can you be found??

Thanks so much for the offer Adam,

You were close but "missed by that much".

Just last week I finally broke down and bought some at a nursery.

Pity.  I much prefer to deal with the small operators and individuals.

Thanks for thinking of me.