Use the Comments space below to post want ads for aquaponics equipment you are looking for or want to sell.  This is not intended to be a place for commercial businesses to advertise, but rather a kind of Craig's list for finding, and off loading, used or extra equipment.

Comment by Bob Grinder on July 13, 2011 at 11:47am
WOW great deal wish Repurposed Materials were here in Rhode Island :-(

We have Tilapia were in Indiana.

Hello everyone, I am very new at this and would like to do a test run on a small system 1st. I would only like about 5-10 blue tilapia by mail. willing to pay for any next day shipping or whatever cost are needed. can anyone help me out with this? must be healthy and happy fish. i am in michigan. can pick up if somewhat near.

Muscovy Ducklings for sale, anyone in central FL who wants to raise ducks please contact me, I've got more ducks that I know what to do with.

Ducks are great fun to watch and muscovy ducks don't quack they are actually more like South American Geese and their meat is lean not fatty or oily.  Males can get up to 15 lb and females up to 9 lb.  They can fly so we usually clip the flight feathers on one wing when they reach about 4 months old and they are big enough for butchering between 4-6 months depending on how big you want them.  We currently have 10 that are close to 4 months old and then about 20 that are right around 6 weeks old.  I expect more babies in about a month as another moma is sitting on a nest.  $5 each but if you take more they are $4 each and if you want more than a few you can probably talk me down even lower.  Bring a pet carrier or some sort of cage to get them home. This is a well engineered and all-inclusive system. It was fun designing it and I know you will be pleased with it. It should be suitable for many aquaponic growing applications and the fish tank is large enough to support additional grow beds.

Obviously, this cannot be shipped easily, so aquapons near the Denver Metro area and front range could best take advantage in buying this system. I will personally deliver it in my pickup truck free-of-charge within a 30 mile radius of Louisville, CO.

I have a complete aquaponics system (less water, plants and fish) for sale, located in the Denver Area. It is a based on a 275 gal (1000L)  IBC tote with a 55 gallon(200L) grow bed mounted on top with an aluminum sub structure for support. The tote was originally filled with agave syrup so it is food grade. We harvested about 2 gallons of the stuff that was left in the tote when we bought it in the spring and are using it in our tea every morning. 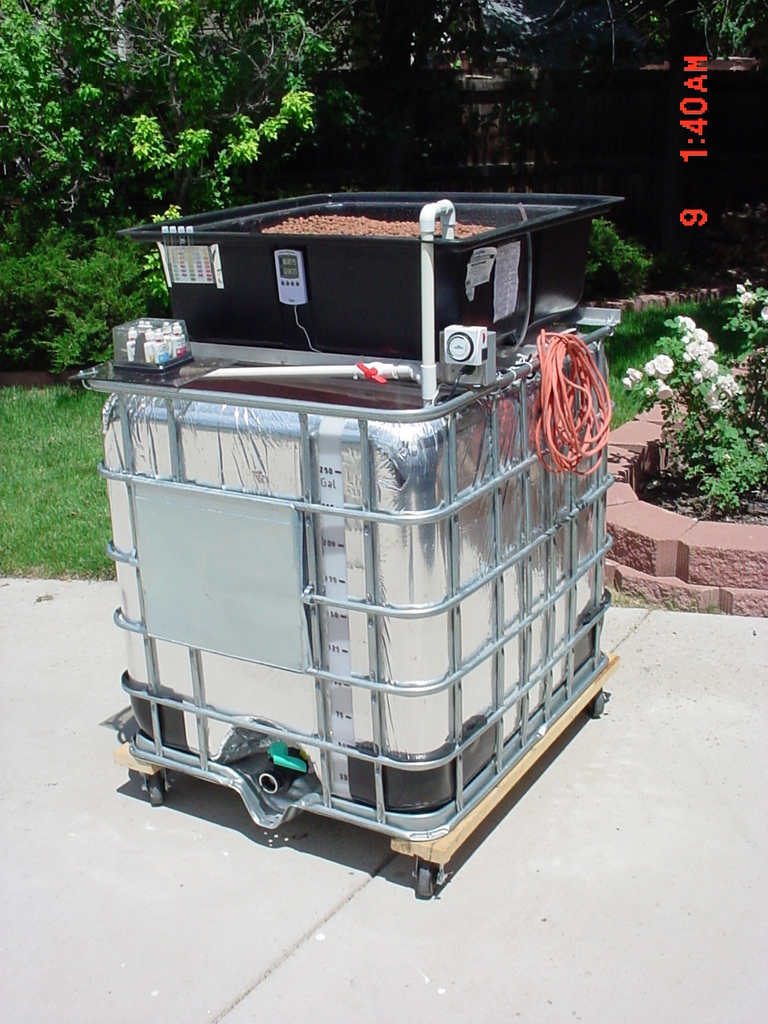 The IBC plastic pallet has been replaced with 2x6 with casters mounted on them to help move the unit around. Note: this becomes difficult once filled with 250gal of water, but two people can force it into submission. When I dissembled the tote assembly I wrapped the sides of the plastic container with aluminized survival blanket to reduce UV penetration to prevent algae blooms in the fish tank.

The ActiveAqua (made in Canada) grow bed is 39.5" x 39.5" x 13" and is filled with 200L (4 bags of 50L each) of new Hydroton. An 1" diameter auto-siphon is driven bu a 550 GPH Active Aqua submersible pump. The system is tuned to replace 12.5 gallons of water approximately every 15 minutes. It takes about 4 minutes to drain back to the fish tank. An external tube is mounted on the side of the grow bed to allow you to watch the water level in the tank as it drains and fills. An outlet with a 50 foot extension cord is mounted on the system to make a convenient spot to plug in the pump and possible grow lights. A switch is used to turn off the pump. The 3/4" pump piping has a bypass with ball valve that directs half the flow back to the tank through numerous small holes that help aerate the system while the pump is running. The water from drain back system is also diverted through a horizontal pipe with a series of holes to supplement the aeration of the fish tank. A timer is also provided to increase the time between drain and fill cycles if power becomes an issue. A small plexiglass platform is attached to one corner to provide a place to perform your water testing. The front lip of the grow bed is drilled to hold the test tube while doing the analysis. To aid in the analysis of the tank environment, a digital inside/outside thermometer and humidity meter is mounted on the front of the grow bed. The 'outside' probe is mounted down by the pump in the tank.

This system has been tested continuously for more than two months to prove out the siphon. I just drained and cleaned it out yesterday June 16, 2011.

Let's Barter &/or Swap!!  I have several hundred blue tilapia fingerlings & fry with more on the way that I'd be willing to trade for various aquaponic supplies. These are healthy stock from my breeding colony that originally came from Morningstar. The oldest fingerlings are almost 5 weeks old, youngest 2 days.

I'd be willing to trade for any of these:

Any kind of grow bed

Comment by TCLynx on June 14, 2011 at 6:51pm
I think you need more than a 20 gallon aquarium for a breeder colony of tilapia to be successful.

I know this is a long shot, but does anyone in Indiana have a greenhouse or land not currently in use that they would be willing to rent at a reasonable price to someone interested in aquaponic gardening on a slightly larger scale?

Also, I am looking for pump and fittings for a small ebb and flow, aquaponic set up, and cheap used 20 gallon fish tanks to house a breeder colony of tilapia.

I'm looking to buy a large male blue tilapia for my breeding colony from someone in the central Florida area. Five blue food grade barrels. $20 each. They held BBQ sauce, and need to be scrubbed or cleaned. I soaked them overnight in Simple Green, but they still need more cleaning before they'd be good for potable water. They would be perfect for barrelponics grow beds. North Florida, near Gainesville. I'll deliver within reason if you buy all five. Thanks.

Comment by Sylvia Bernstein on May 29, 2011 at 7:10am
Hi Marion.  We'd be happy to help you with that.  We carry both 3" net pots and Expanded Shale (instead of Hydroton - mined in the U.S. and more surface area)

I have happy and healthy Tilapia for sale. They are Nile, Blue/Black and Pearl. They are 2 dollars a piece and range from 2-5 inches. Email me or give me a call if you are interested.

Comment by Sylvia Bernstein on April 30, 2011 at 7:46am
I"m guessing he meant fluoride, TC, which I'm afraid might be toxic in concentrated quantities