I am trying to decide which system to build and the one question I am not sure about is, should the solids in the fish tank be removed or should they be allowed to enter the grow beds for the plants and worms.  If this is a flame topic I am sorry ahead of time.

That's a good, honest question, Scott. The simplest, generic answer is: for rafts and NTF systems, the waste is filtered first, but in media systems the waste can be sent to the growbeds. Everyone has their own preferences, though, and each system is different.

In our first system our beds weren't deep enough to handle the waste, so we filtered the waste out. That was a hassle & we changed things with our new system. Now we have deep beds that filter the waste, and it's so much easier now. We do have a raft system now that we are not prefiltering. It collects waste, but soon we'll be changing the standpipe to pull from the bottom, and that should resolve most of that problem. In the meantime, we vacuum once in a while, which is easier for us than cleaning filters.

Over time you will accumulate a lot of waste. As your fish grow and you begin feeding more heavily this will become apparent.  I would advise you to filter the waste.  This gives you the option of adding as much back into the system as you wish.

There are many good ways to filter the waste. 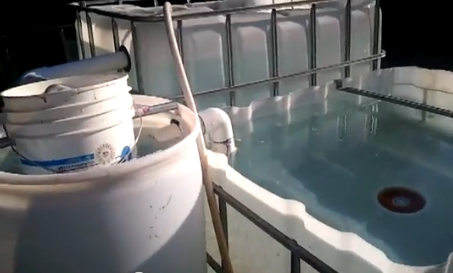 This is my filter.  Water flows into the bucket then filters through cooler pads and seeps out into the barrel where smaller particles are allowed to settle.  Over time there will be a lot of solids.  A filter allows you to add them to your grow beds in the amounts you wish.  Put the rest of it in your dirt garden or compost.

Good subject. Back in the day in fish tanks we had a very cool filtering device called an under gravel filter. It worked pretty much as the media in your grow beds.

Here is an image: http://www.glassreef.co.uk/Graphics/Equipment/Filters/Undergravel_F...

The fish waste would sink to the bottom and be degraded in this case by aerobic bacteria to ammonia and then the rest of the nitrogen cycle would take over. Eventually however, non-degradable solids would overwhelm the system you would have to clean the tank. From my experience, I have found the same to be true for deep bed media systems (constant or ebb and flow). Eventually even with biological mediation with worms and etc, solids build up, cause channeling, clogging and the system must be cleaned. (http://www.ncbi.nlm.nih.gov/pubmed/17824278).

Sooooooo for me, I use a clarifier to keep as much of the solid waste out as possible. Eventually clogging does occur but it does not happen as quickly. Just my humble opinion.

I'm using cooler pads in a bucket too, I don't use the second barrel as a sediment tank, most sediment ends up in the bucket bottom anyway, but the raft bed is still not bad enough to do something about.

I had been wondering about the under gravel filter however, thanks for the link Doc.  I personally I'm done with gravel beds...

Well I think I will go with the CHOP 2 system, due to the fact the grow beds height is independent from the fish and sump tank.  Also, since putting the solids directly into the grow beds will hasten the clogging and cleaning then the CHOP 2 seems to be the better choice.

so glad to see this discussion it's one I've tried bringing up elsewhere and not gotten answered. We were thinking of using the old vacuum hose we used to use when we had a fish tank in the house for now, but if that seems to not be doing the trick I'm excited to see this discussion so that we'll have more ideas when we get to that point

Well much of that probably depends on bio-filtration capacity and stocking densities. It would certainly appear that most folks  very much over-stock their systems with fish...adding to the problem of solids. In all likelyhood some form of solids removal may become necessary even in a lightly stocked system. Worms will seem to certainly take care of a good deal of that, but not 100%. It would be smart to employ other aquatic detrivores to help the worms out (gammarus/scuds etc)...and to stock your system only with an amount of fish that it takes to drive decent plant growth. A nice bio-diverse chain of many organisms filling various niche cycles appears somewhat important to this topic.

The way in which you plant and what you plant would seem to make a difference too. I'm counting left over root-mass as solids there.

Even after all of that you may very well find at some point you still need to remove some solids...or you may not. IDK, the topic is a hotly debated one. Personally, I chose a strategy with the option to add on some solids removal later. I'll see how it works out, before singing the praises of this hypothesis. I half don't believe I'll be able to get away with no solids removal after a time...but will try nonetheless...I have some tricks up my sleeve that wouldn't exactly be good advice to recommend to anyone at this point.