What got you into Aquaponics?

I keep aquariums and I like gardening. So what a better marriage than Aquaponics.

It has brought me great pleasure to watch my system come from a passing fancy to a working setup.

My answer is 80% "What TCLynx Just Said," and 20% "Because it uses way less water input than my raised-bed garden ever has or ever will."

I was researching raising shrimp back in '03, googled a few terms, and stumbled on the S&S aquaponics site. Been totally addicted ever since and really want to turn it into my new career (working on that). I see it really taking off these days from just a few years ago when aquaponics was virtually unheard of (at least here in the US).

I haven't made the switch over to AP as a lifestyle yet. For now it's just a hobby that brings me joy.

My girlfriend says there is just one thin line I have not crossed yet, and thats moving her car from the garage out to the street to make more room for aquaponics. She says she's gonna put me on that show "intervention" if it goes that far......

The smile left his face when you grabbed the tape measure - -

then to guests at my house, sleeping with the fishes would have a whole different meaning and I really would need a good air bed for them huh?

How ironic...thats what I intend to do with the spare room....not the liner thing, but definately set up another seperate system. Piks coming soon.......

Wow, I'm thinking we need to set up yet another group in here..AA...Aquaponics Anonymous.  I volunteer to be the first member, but I think Dave and TC will be right there with me.  Our our spouses / SOs will sign us up!

Great discussion topic, Chi man.  I got into this crazy world because I was in the Hydro industry and could never get my arms around the chemicals.  Hydro has a ton of advantages over soil, IMO, but also has some big issues.  AP solves all that...every one.  I was on the phone with a hydro store owner yesterday going through the usual grilling and enjoying every minute of it..."you really don't have to replace the water?"...'nope"..."what about nutrient buildup"...."it's a balanced eco-system.  Just like in any balanced system, there is none"..."hmmm...I'll bet it actually costs less to operate than a hydro system"..."much less...and you can eat your nutrient producers"..."hmmm..."

I'm reading Hot, Flat and Crowded right now and, as per usual when I read or watch this kind of thing I'm constantly thinking about how many global problems AP solves, or has the potential to solve.  Worth a little addiction, I say!

I saw the amazing AP setups at Growing Power while on a tour (I recommend this if you are ever in Milwaukee) almost a year ago now and was truly amazed. It wasn't until I saw the "small-scale aquaponics" model below while attending the Growing Power Urban Ag Conference this past September that I really decided that I was going to stop dreaming of "someday" and go ahead convert my home aquarium into an AP system. My wife was a little skeptical at first because we only have a 500 square foot efficiency. But now that everything is growing the fish tank requires less work (and the system is a lot quieter and uses less electricity) she is probably more excited about it than me - she brings it up in dinner conversations and bragged about it to family over the recent holiday. I think the easiest way to get people interested may be to sell them the idea that it can be small and that they don't need a lot of space or investment. AP systems can easily be in every home. 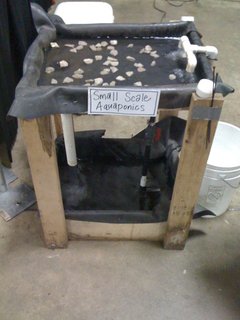 I'm a writer (when I' not being a physicist and DOD program manager). Many of my fellow writers were struggling, so we were talking about how to reduce expenses.

One lives in a yurt, and others were talking about the Tiny Home movement. Internet searching of Tiny Home stuff led to various sustainability sites, the Windowfarm Project, and I started up my own aquaponic windowfarms. But windowfarms can only grow a small amount - they're more a decoration than a serious food production system.

I started loving on the cool Australian sites and looked to see what it would cost to get a system here in the US. Since I couldn't find anything cheap enough to pass the "impulse purchase" threshold, I've been trying to put together a system that doesn't take a lot of construction, built from parts that should be locally available to most Americans. I wanted to do something that didn't look like a handyman special (e.g., no hacked up IBCs, halved blue plastic drums, etc.).

Just completed the basic 100 gallon system with grow lights - seen here in this youtube video, "Complete 3x5 Aquaponics Unit." My cost for this system,including S&H,was just a bit under $550, which includes tank, growbed, heavy-duty shelving, lights, rocks, pumps, plumbing, and water testing equipment. My autosiphon/plumbing didn't require any solvents/glues and it's been running like a charm for several weeks now.  The tilapia and license will run me another $150.

I expect to eventually expand this to a 200 gallon, 4 growbed system, limited by the space I have available in my basement room. When the system is mature, I hope to be able to produce enough to feed my family all year round. I expect the cost to complete the rest of the system will be under $1000 - so $1500 for the entire 200 gallon, 4 growbed, system if we don't count the cost of the fish. If I was a vegan, a load of feeder goldfish would suffice for the required biomass.

$550 isn't "impulse buy" level for everyone, but it *is* only 3 digits. And if I was using fish that could exist outdoors and had a yard with ample sunlight, the total cost would be roughly $300 - definitely approaching "impulse purchase" territory.