How are people tackling the bugs that find our systems?  I've been using a combination of beneficial insects (mainly ladybugs) and spraying with insecticidal soap when I have to...but I worry about the effect that using too much of that might have on the fish.  If a plant is pretty small (lettuces, greens, beans, peppers) and is pretty bug infested I'll take it out of the media and let it soak in the fish tank for about 15 minutes. the bugs drown, and the fish seem to love them.
I know some people use neem oil with success.  What are the downsides?  What else do you guys use?
Also, my most buggy plants are salad greens and peppers.  They've stayed totally off my herbs, broccoli, and tomatoes.  What have other's experience been with this?  Any hypothesis as to why?  Travis thinks it has something to do with nitrogen levels...

Thnx TC. How do u know all this stuff?! My GBs are in another room from FTs and I spray the vegies with a mist so seems safe here. Worked the same. Worms dried up and were gone as u described so seems to work great in my case. 2 aps and all was well. Consumed 2 largest broc heads last night. Delicious! Have started lots more. Biggest mistake so far has not been keeping enough started plants ready for GBs as they go on line. With all 10 GBs going there will be lots of food.

I've read lots of labels and looked up lots of products online seeing as when I started in this, the only "safe" to use stuff was the Bacillus thuringiensis stuff.  I had actually used Organocide before I ever heard of Aquaponics, I had some sago palms covered with scale insects.  Organocide works but isn't all that pleasant to use.

Neem is also good stuff but again, any oil I use with extreme caution around aquaponics.

TCLynx - It doesn't seem like the ants are bugging your plants too bad; however, have you ever tried DE?  I'm just curious if you've had any success using DE and/or is it harmful to fish?

On the up side, I wanted to let everyone know that for the most part (in Aquaponics but also in general around my gardens) I have taken the attitude to mostly ignore the bugs. First, I figure the good bugs won't move in and take care of the problem if I put too much effort into killing off the food source. Second, many of the pests I've encountered here don't really have a good solution anyway and most importantly, I'm kinda lazy and I want may garden to learn to take care of itself.

I have in the past occasionally used Thuricide against caterpillars in AP as well as the dirt garden. This past year, I have not. If I notice a caterpillar, I will throw it to the fish or chickens but I haven't gone on any major search and destroy missions. I I notice it, I'll hand pick it off but I haven't been going looking. I guess the wasps and hornets I've been largely ignoring are doing their jobs.

I have had problems with red spider mites on my tomato plants. I don't know what to do about them so have really done nothing except remove plants that are so terribly infested that they seem to stop producing. Otherwise, I've only been frowning as I try to ignore them.

And then there are the many types of stink bugs/leaf footed bugs/squash bugs. Sigh. These bugs don't seem to be affected even by many of the more harsh chemical sprays let alone the organic choices. Neem can cause the young to never fully develop and might help to reduce the adult breeding populations but then you just have giant size nymphs sucking juices from your plants and fruits. If really dedicated I guess one could go around with a pan of soapy water and knock the nymphs off into the water to die but that could be dangerous over AP grow beds. Now these bugs don't usually seem to kill the plants directly but they do suck juices from the plants and the fruits being marked would make them not so marketable on a commercial level though it is still edible. I think perhaps the squash bugs when a really heavy infestation is going on could do in squash plants or at least really hinder their production. The leaf footed bugs and stink bugs seem to really like Tomatoes and corn. I don't know what natural predator would really help with them, the vinegar smell of them may make them unpalatable to birds, at least I haven't seen birds attacking them. So again, another pest I'm generally ignoring since I don't really know what to do about them.

Aphids, most of the aphids I've seen seem to be farmed by ants. I've got no good way to get rid of ants here so there isn't much point in trying to remove the aphids since the ants would just bring them back. Even so, if a plant is really heavily infested and not growing well, it goes to the chickens. Otherwise most of my plants seem able to survive some aphids without much sign of distress. Most of my pepper plants are being aphid farmed by ants. I just have to be careful not to get bit by the ants, the plants still produce. Aphids seem to be more of a problem as we get out of the proper season for particular plants.

Even with the pest problems I have experienced and my lack of action about them. I still get plenty of produce.
My first two winters with my system, I had greenhouse plastic over it. Come the heating spring weather the spider mites seemed to be the worst.
Now my system is totally open to the elements. Only some of the tomato plants were heavily infested with spider mites, the rest seem really good. I think the integrated pest management is probably a bit more important in a greenhouse situation. Once the pests are in, you have to manage them since it is an artificial environment. Out in the open nature helps manage pests but the system is at the mercy of nature as well.

I hope this encourages people to stress less.

Sylvia - Interesting that you say Travis indicates increased nitrogen levels seem to promote pest infestations.  I recently spoke to a rep from a fertilizer company that indicated the same thing.  Of course he was pushing a calcium based fertilizer versus the traditional nitrogen based fertilizer most people use.  He indicated that pest's vision is sensitive to the infared spectrum and nitrogen is naturally hotter than calcium.  Hence, they will attack plants with higher levels of nitrogen in their system.  I've currently been using this rep's fertilizer for about 2 months and have yet to experience an infestation of spider mites which seem to happen so easily normally with my plumerias are moved inside.  I plan to continue testing.

I'm not backing Travis' finding, but am definitely agreeing that there seems to be a common belief that plants full of higher nitrogen levels may be potentially more targeted by pests than those plants with lower levels.  Unfortunately the calcium based fertilizer I'm using is completely irrelevant to APs as fish secrete a nitrate based, natural fertilizer.  I just wanted to chime in and indicate that Travis' statement may hold some truth.

I meant to state that the fertilizer rep I spoke to was selling "Nectar for the Gods" fertilizer line.  It has done phenomenal for my soil plants. Not pushing the line; however, thought important to mention the fertilizer in case there are any out there that are looking for a calcium based fertilizer.

Food grade DE is pretty safe, just don't go dumping the bag into the water since that would just make everything cloudy and be totally useless for pest control.

As for using DE against pests, if you can keep the dust dry, it does deter pests but as soon as it gets wet it looses its effectiveness to a large extent.  There for it has been of little use to me outside against ants since they are really tough and it takes more than a sprinkle of DE in a humid/wet environment to stop them.

And yet excessive nitrogen can cause excessive growth that is often weak and therefor attractive to pests.

The fish are not necessarily giving us a nitrogen based fertilizer, that is simply what we test for and mostly think about since the unprocessed forms of nitrogen are toxic to the fish.  Fish waste provides plenty of phosphorus and most of the trace elements as well for a balanced system with less than a hand full of things that we need to supplement and if you have the system well balanced and have just the right source water and fish feed, you might not need to supplement very much at all.

Has anyone tried Murray Hallam's technique of using molasses in water that he promotes on his new DVD? If so, did you get positive results. I had never heard of doing that.

I've done it several times but I can't really be sure of the results yet.

I haven't seen what Mr Hallman has said. But here is a great article on the benifits of molasses in gardening. Yes. it's a pot growing site, but hey, these folks are serious about their plants health...

Good article about Molasses there David!

Latest infestation in the GH lettuce. Any suggestions. Lettuce loaded with these: (Click on pic for real close-up) 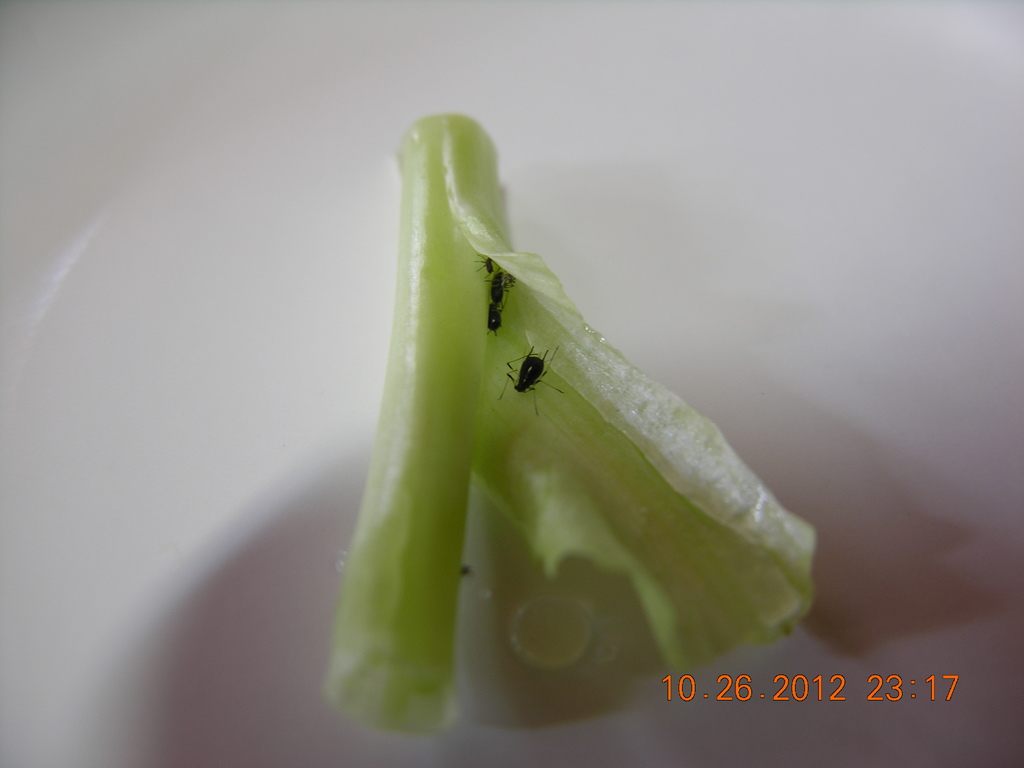