I have purchased 30 new community fish. The fish are floating in their store baggies as I write. I decided to stick with inexpensive fish until I can prove my worth as an aquaponicist. This time I bought the fish from a different store than the previous ones. The 30 fish are a mix of red minnows as well as small and medium comet goldfish. I think this is a good choice for me as a hobbyist. The goldfish seemed to not be the best fit for my system until I re-evaluated the cost of typical community fish. In time I hope to be able to find a less expensive fish that is more suitable. Since my aqarium is somewhat small I find it hard to justify finding consumable fish. Although I have my thoughts set on Crappie.

I added a small aquarium item that the fish can hide in and swim around. It is made of acrylic and silk. I figure fish like to hide from each other if they can.

I have also changed the design of my drain pipes that sit over the aquarium. The outpour flow seemed very violent. I say this because after much observation of the fish I noticed them struggle to swim when the auto-siphons drained the grow beds. As they drained they formed a current that circled the tank in a counter clockwise fashion. This toilet flush like vortex seemed to be to much for the smaller goldfish. I thought to myself, fish probably want to rest more than my system allows. I altered the outflow to reduce the rush of water that flows out. I capped the end of the drain, and drilled holes on the underside of the bottom most section of the drain pipe (the last horizontal piece where water exits the PVC drain). This design now forces the water to "rain" into the system which seems to disturb the water less than the toilet bowl effect before. The fish now seem to be able to swim well when the grow beds drain. 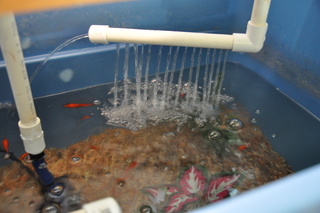 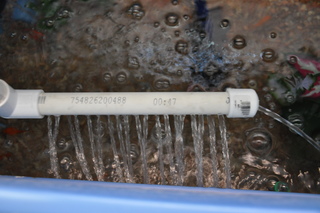