I really should have kept better records and posted more photos, but this is an aquaponics forum...Anyways...

The whole worm tea deal was just me pushing ridiculously high pH levels (8.7 on average with no interventions on my part, nitrates ran between 50 - 100) in a perpetually brewing 12 liters H2O/70grams of worm castings (in a womans nylon sock) solution to see if anything would even grow. (I have really hard water and wanted to try and simulate my projected  post cycling AP scenario - high pH and nitrates). I was blown away at how well everything did. Peppers were flowering and setting fruit, lettuce was harvested multiple times, swiss chard as well, basil etc...It just didn't make any sense? The only thing I added was a little bit of wood ash. I should add that I tend to overdo it with the O2 (which according to what you've said, probably helped quite a bit). Again though, totally unexpected how well it went...I'm doing something similar now with humonia and wood ash in a small 3 net pot 'decorative herb' station. Only I'm adjusting pH this time around (generally 6.3 or so)...

The reason I ask is that I'm building a little hydro-set up for some chilly peppers and dual root zone in conjunction with organic hydro seemed appealing.

It's VERY good to have the water change issue confirmed by someone who knows what they are doing. :) Thanks. 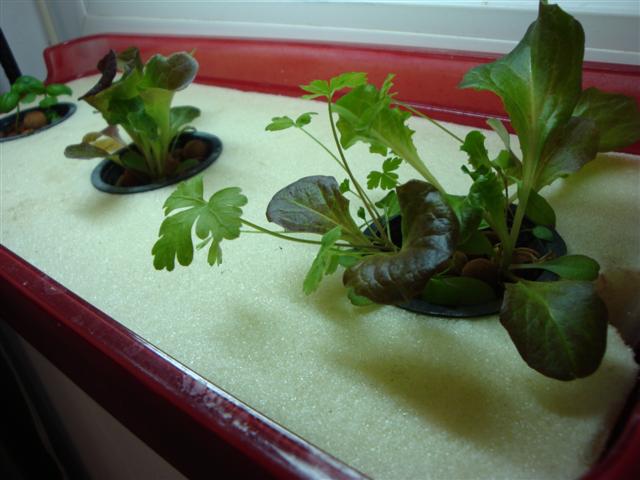 Not that much difference in my own experience.  You just have to maintain enough oxygen for what's in the system, in this case the plants, bacteria, and any waste that isn't removed.  Of course, O2 levels are more difficult to maintain in organic solutions as opposed to synthetic ones, because of the O2 demand that increases when using organic nutrients, filters, etc.

Yes, no residual salt is a huge benefit, and I haven't needed to do any water changes in the first 25 days of my current Induction Light Lettuce trial.  I only had to do a quarter of one during the preceding 49-day water-cooled HID Lettuce trial.  Otherwise, I basically top off to maintain a consistent water level, and use a combination of meters and "leaf gauging" to keep the nutrient level consistent.

One would think that there could be a build up of certain unused nutrient components even with organics, as the plants use less of some than others; however, I've yet to see any toxicity issues from not running to waste and replacing the solution with lettuce, basil or other vegetative plants.  As a matter of fact, I've found that the quickest way to get your system (bacteria) to crash and/or have your pH rubber-banding all over the place is to remove and replace too much of the solution at once. Very similar to aquaponics in that regard, actually... the surest way to make it so you have to rely on water changes is to replace too much or do them too often.

I want to have water & nutrient analysis done on the next trial at the beginning, middle and final stages of a hydro-organic run, but I'll be doing larger, fruiting plants (tomatoes & sweet peppers), and it becomes a different situation where occasional run to waste can be necessary.

Still WAY better than with synthetics, though.

I noticed that you had a worm tea hydro system in your photos.  What's been your experience?

Interesting...so other than being able to slack a bit with the O2, not much difference...How about water changes? That may be a small benefit too, I suppose? No nutrient/salt laden water to get rid of...

On an unrelated question: Do you still have a need to change out the water due to salts build up with the special organic formula that you are using, or is that not a problem?

Tricky question, Vlad.  There's good data regarding the benefit of creating dual root zones, and it's hard to argue with the results of that research.

When cultivating by NFT (large or small channel), DWC (large or small aerated basin), Flood&Drain, and Aeroponics, and working with others who have done the same, I have found that the ability to deliver oxygen to the roots represents one of the most common limiting factors.  I think this may be why many people experience better growth by creating dual root zones.  They weren't providing enough aeration before (again, most don't), so they inadvertently end up providing more oxygen to the root/plant when part or all of the root system is either suspended in humid air or porous media.

The science behind plants producing different roots to accomplish certain goals (upper roots collect air and nutrients, lower roots collect water) is valid; however, when running all the systems above, I rarely saw growth rates differ that much between totally and partially submerged roots (so long as enough O2 exists in the water) and only saw significantly increased growth when the O2 level was higher in that particular system than in another.

There was a test I did about 6 years ago using three 6in wide x 7in deep x 48in long trays.  One tray was set up as NFT (shallow stream of constantly flowing nutrient water), the second as a Deep Water NFT (5" water depth aerated constant flow solution) and the third as an ebb&flow with "chunky" (marble sized) perlite media.   The reservoir was filled with a synthetic nutrient solution maintained at EC of 1.4 and a D.O. of 5mg/l.  There was no notable difference in growth, yield, or root weight between the NFT and DW-NFT systems*, and only a slightly increased difference for the media-filled Ebb&Flow tray.

Were I to speculate, I would suggest that the media filled tray possibly encouraged larger root growth in the earlier stages of growth, which contributed to a slightly increased production of fruit.  Based upon trials I've done since, I would also suggest that if the test were recreated with a higher D.O level maintained in the reservoir, the DW-NFT might do better (although this does create cost/benefit and potential heat issues).

*I'll add that since the trays were so short (48in.), there was only a negligible drop in D.O. levels from the entry point to the exit point of the nutrient solution in the NFT and DW-NFT trays.

In your experience, what are your thoughts in regards to creating a dual root zone (upper/feeding, lower/watering) when it comes  to organic hydro? Is it worth the extra bit of effort?