Can the term, “soil-less” still be applied to an aged media grow bed where the humus layer becomes a significant source of plant nutrients? (This assumes the bed is used to capture and mineralize solids).

I personally believe there is a point in the life-cycle of a grow bed where the scale tips towards a soil-based system, especially when the decomposition of dead plant material, i.e. roots, is added to the mix.

If a system has the support critters to aid in mineralization and the system is managed well, you shouldn't get much of a buildup. Even with that aside, and your system did have "soil" in it and was healthy, does it really matter if you can label it "soiless"? I don't think it really matters and overall could make the system more stable.

Or was your question regarding the definition of soil?

Although the humus layer meets many of the criteria to be called soil, I would say it's not technically soil, based on the USDA definition of soil.

soil - Soil is a natural body comprised of solids (minerals and organic matter), liquid, and gases that occurs on the land surface, occupies space, and is characterized by one or both of the following: horizons, or layers, that are distinguishable from the initial material as a result of additions, losses, transfers, and transformations of energy and matter or the ability to support rooted plants in a natural environment.

The upper limit of soil is the boundary between soil and air, shallow water, live plants, or plant materials that have not begun to decompose. Areas are not considered to have soil if the surface is permanently covered by water too deep (typically more than 2.5 meters) for the growth of rooted plants.

The lower boundary that separates soil from the nonsoil underneath is most difficult to define. Soil consists of horizons near the Earth's surface that, in contrast to the underlying parent material, have been altered by the interactions of climate, relief, and living organisms over time. Commonly, soil grades at its lower boundary to hard rock or to earthy materials virtually devoid of animals, roots, or other marks of biological activity. For purposes of classification, the lower boundary of soil is arbitrarily set at 200 cm.

I have an interest in the dynamics of solids decomposition and the nutrient exchange and by-products that occurs in an AP system where fish waste (solids) are not removed. Soil Science is one discipline that offers some answers, especially in understanding the process organic decomposition plays in the production of soil.

@ Jay: I believe humus refers to the organic matter in soil, including worm castings.

@Terri Mikkola - I get what you are saying.  The earth was at one time inorganic, and through much of the same process inorganic material broke down and created soil.   I don't think I would let my system get to that point just because it would begin to clog, but it's fair to say an aged media bed is on it's way to becoming soil.

I've actually been thinking of doing an experiment with vertical and/or wicking beds that would be filled with worm compost.  I don't think it would hurt the fish at all.

@Bob Many people use worm castings in systems and some will argue it is a good/bad idea due to possible contamination. I have yet to come across any horror stories so I would assume those who don't like the idea are just being cautious.

@Terri The definition of aquaponics is highly debatable. Some will argue that AP couldn't have soil, is or isn't recirculating, a pond is/isn't aquaponics,  blah blah. It really depends on how you define it personally. One thing I do agree on is the science behind soil and understanding how it can benefit or hurt systems is worth discussing.

Not soil, but there is an interesting article linked here about anaerobic deep sand beds in aquariums here: http://community.theaquaponicsource.com/group/sacramento-aquaponics...

@ Bob: One thing you may want to consider going forward with your experiment is to not use 100% worm castings. Please review the section on "application rates" in the attached paper.

Off topic of gravel beds being soil, but something I found interesting is the discussion on BYAP of a system where the wicking beds are part of the recirculating system.

@Rebecca: Thanks for the link

I like the wicking bed concept for treating fish waste. There's a septic tank design that uses the same principle - Evapotranspiration bed.  I think Earthen Group's design would be ideal for a K-12 science project. 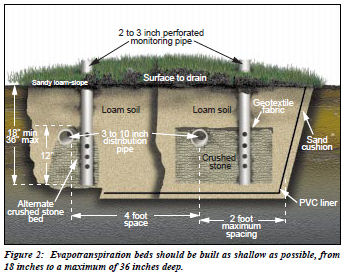 Terry, when the solids are mineralized in the media bed aren't they converted to solubile nutrients that presumably are used by the plants?