I have been thinking about this one for a while, but the decision to add a sump for the aeroponic line I'm working on spurred me on to modify the old raft bed into a sand bed at the same time.  I took an old pool filter, cut the top aperture bigger and gutted out all the insides.  It was pressure washed several times and left with water in it until algae grew.  Then a second pressure wash and into place it went. 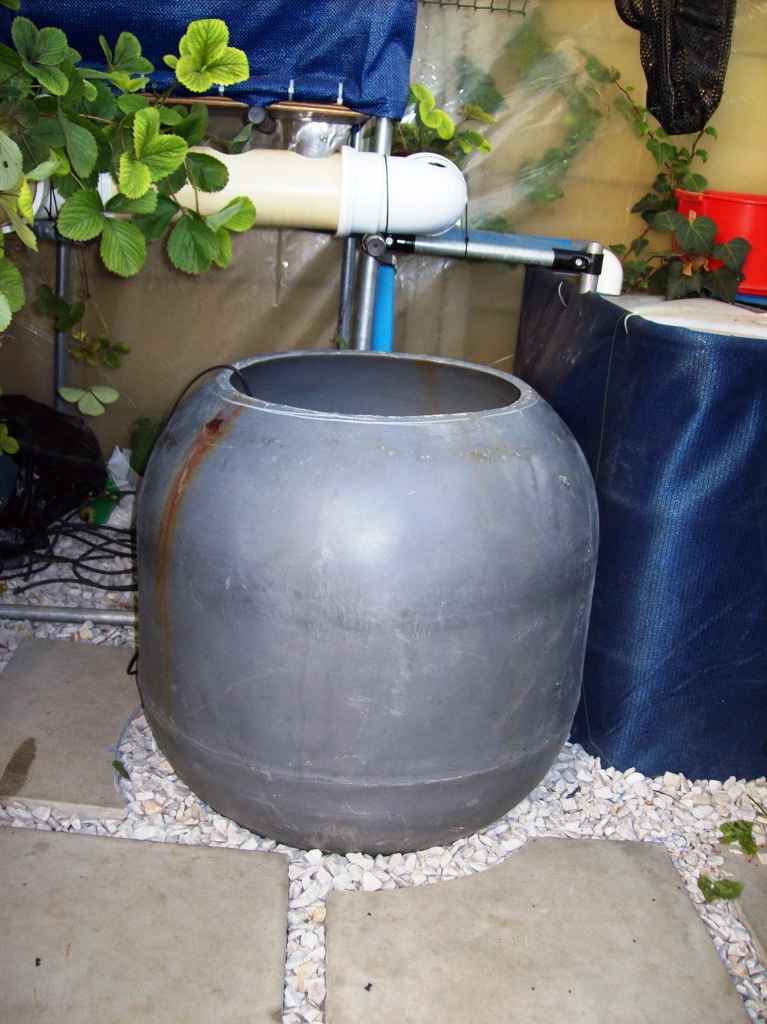 The fit is a bit tighter than what I would have liked, but space is at a premium and the sump at least adds about 120 liters of water volume. The sump is connected to the bottom valve opening of the IBR tank (which was removed and replaced with 50 mm pipe).  Water feeds into the sump paccively, while the top pipe will be used to disguse the water lines leaving the sump.

The bin had its bottom drain modified with the addition of components recycled from the filter body.  As the sand is fine (1 - 5 mm) a bell or loop is out of the question.  I joined two of the filter's water pipes that used to be the inlet on the filter together, and added a 20 mm pipe sliced with a band saw in a few places inside the pool filter piping.  The idea is that the outer black perforated pipe acts as a guard pipe, and that the inner 20 mm pipe restricts flow from the bed to allow a gentle input to fill the bed.  Without the restriction, the water will never rise in the bed due to the draining ability of the black pipe.  I also have a ball valve in the 50 mm drain pipe under the bed to restrict things further if outflow is still too high. 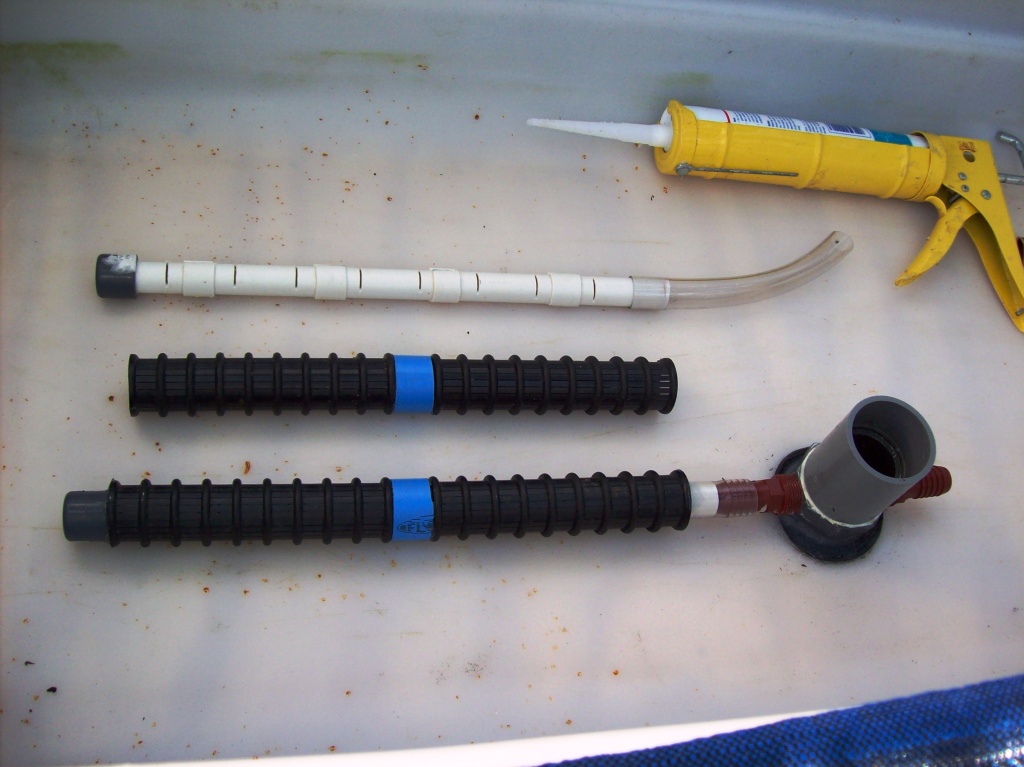 The drain system is attached to the original centre drain standpipe via two short sections of clear 20 mm hose.  A standard 50 mm stand pipe will be added to the bed to allow the water height to be managed on the timed flood and drain cycle.  To be sure that the sand behaves, I will be covering the drain in pea gravel before adding the sand to the desired height, while the stand pipe will still be protected by a guard pipe as I do not intend to flood the bed to the top of the sand but to about 40 mm below the surface only.

Tomorrow comes the gravel if the leak check is favourable, followed by the sand ASAP.  Water will flow into the bed through a 40 mm figure-of-eight grid on the surface of the bed, and the initial flood cycle to be tested is 15 minutes on 1 hour off.

Encouraging initial report! Small aquarium filter wrigglers should be ideal in this media, although they may occur naturally, they can be proactively introduced, especially since we are already anticipating clogging issues.The worms in my pea gravel are propagating at 1/4-1/8 their normal average size, i suspect that this is to maneuver the grade of gravel.

Permalink Reply by Kobus Jooste on May 14, 2011 at 10:51am
I suspect that the wrigglers will have an easy time in the sand in terms of being able to move about.  As soon as I think there is something for them to eat, I will let some loose in there and see what happens.  I'll also try to add "before" and "after" pictures of the water for you to see if you think there is a lot remaining behind in the sand.  At present, the pump is not in a seperating compartment yet.  The philosophy is as follows:  The water enters the sump at the base, and the solids settle out.  The pump is about 45 cm off the bottom of the sump, and only switches on 9 times a day, 15 minutes at a time.  The water therefore has enough time to settle and allow the pump to pump relatively clean water.  As soon as I have been able to scrounge some free filter material for the swirl screen, I'll protect the pump further.

Permalink Reply by Kobus Jooste on May 17, 2011 at 4:05am
Sand bed seed germination is working!  I have dropped some lettuce seeds in there, and with the 8 floods per 24 hours cycle they are germinating.

So far so good in general on the sand bed.  The water going into it is very clean, and up untill now, there seem to be no muck build up in the areas where the water is trickled in.  One bummer is that more fines settle out in the base of the sump than what I though, and as this is pretty much the lowest point in the system barring the FT, it will be difficult getting it out without a pump.

The plants are all doing OK once the transplant shock passed.  Many of the beetroot has dumped their older outside leaves, but all the plants are still alive and growing.

One unexpected issue was the fine silt that persists on top of the bed.  This is the bit that I could not was out, and it coats the surface of the plants in the bed it the water rises too high.  In order to control the flooding cycle a bit better, I have added a gate valve on the incoming water line.  The whole system is plumbed with 50 mm drains thus fine-tuning one of those has turned out to be a bother.  The two control points together seem to be working better though.

Sounds good so far. If you plumb the FT return line from sump(internally) with an extension and a ninety degree bend to the center base of the sump, it should suck all the fines back into the FT. I've used the same principle with my swirl filter, from center base a pipe runs up to about half the height of sump and exits the side with a tap to the outside of sump. As you know the swirl naturally concentrates waste to the middle of sump, so i open the tap for a few seconds every so often to pull solids out, this allows longer times between sump cleaning cycles.

Pretty sure this can be done with F&D. This will remove the cycling and silt coating problems so may be you might want to consider this for trial in the future.

Permalink Reply by Kobus Jooste on May 24, 2011 at 9:18am
I would very much like to use the solids either in my mineralization sump or my flower pots

Permalink Reply by Kobus Jooste on June 16, 2011 at 12:17am
I think 90% + germinated, but there are a few issues working against them and they are not doing great right now.  It is the middle of winter, and it is a cold one.  I moved the tilapia into my polycarb greenhouse thus there is very little nutrients in the system.  All the plants are just standing still right now, seeds included.  I also added about an inch of sand over the beds, which buried some of the seeds too deep.  I think that from what I have seen here, I would say a shallow germination bed on an hourly cycle would be my next experiment.  All the transplants are still going, but slow.  Will have to be patient until there is fish in the system again and things warm up to see how they grow.

Permalink Reply by Kobus Jooste on October 26, 2011 at 1:51am
We see 0 degrees C here every so often in winter, but the water temp in the small system, if kept uncovered, never really goes below 8 degrees C - enough to keep koi going but not tilapia.

Very nice ! what is the low temp in your area ?