Where can I fit a filter?

I've got an alternating timed flood-drain setup with an indexing valve, like the one shown here.  The return pipes aren't shown, but essentially all the return water flows to the tank on the left and is drawn out from the one on the right.  So I have a river of sorts.

Because the tanks empty into each other, each one acts as a settling tank and gets a lot of fish waste deposited on the bottom. Essentially, the fish are living in poop soup.  I haven't seen any ill effects on my trout, tilapia, perch, or catfish, but I do see consistently high nitrate levels that force me to do water changes.

The solids settling problem I think I can solve by using a pipe extension that pulls the water off the bottom of the tank like this: 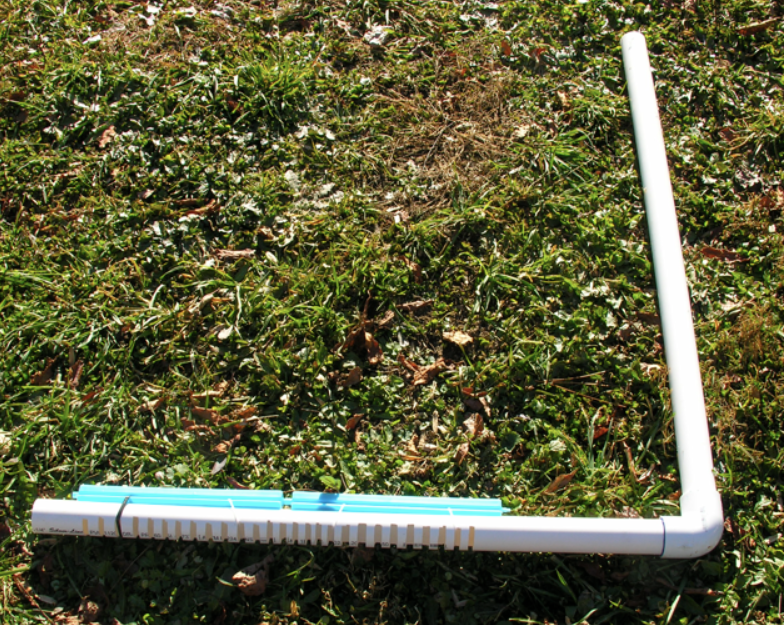 But then I need a solids filter before the pump.  The trouble is is that the the bottoms of the posts (in the 2nd image) are at ground level and currently the "bottle" shown is actually a 5 gallon bucket.  I could replace it with an actual bottle to make a swirl filter that drains at the bottom but that will involve a lot of digging to create a place for it to drain to, as well as re-shoring up the posts.

Does anyone know a way of building a solids filter for which you don't need a drain at the bottom?

Hope this makes sense.  Thanks!

Once you pump the solids to the grow beds, that may solve the problem without another filter.  Even with a round tank and pump pickup at the center, I had the same problem until I installed an air lift pump.

Try what I did.

My FTs stay very clear due to my SLO system (old photo of my SLO PU tube you show above) and the skimmer T at the top which clears old floating fish food as well. I simply made the 8" scraps from my 4" gravel guard production into solids catchers in the GBs. I slot them just like gravel guards and put them in the GBs right under the inlets. (work them into media a bit, like an inch or so) It has made a big difference. As you know I also added my swirl filter in line as well. I like keeping the trout water as pristine as possible. They are for consumption after all. You are what you eat

Basically I turn this left over scrap 4" S&D pipe: 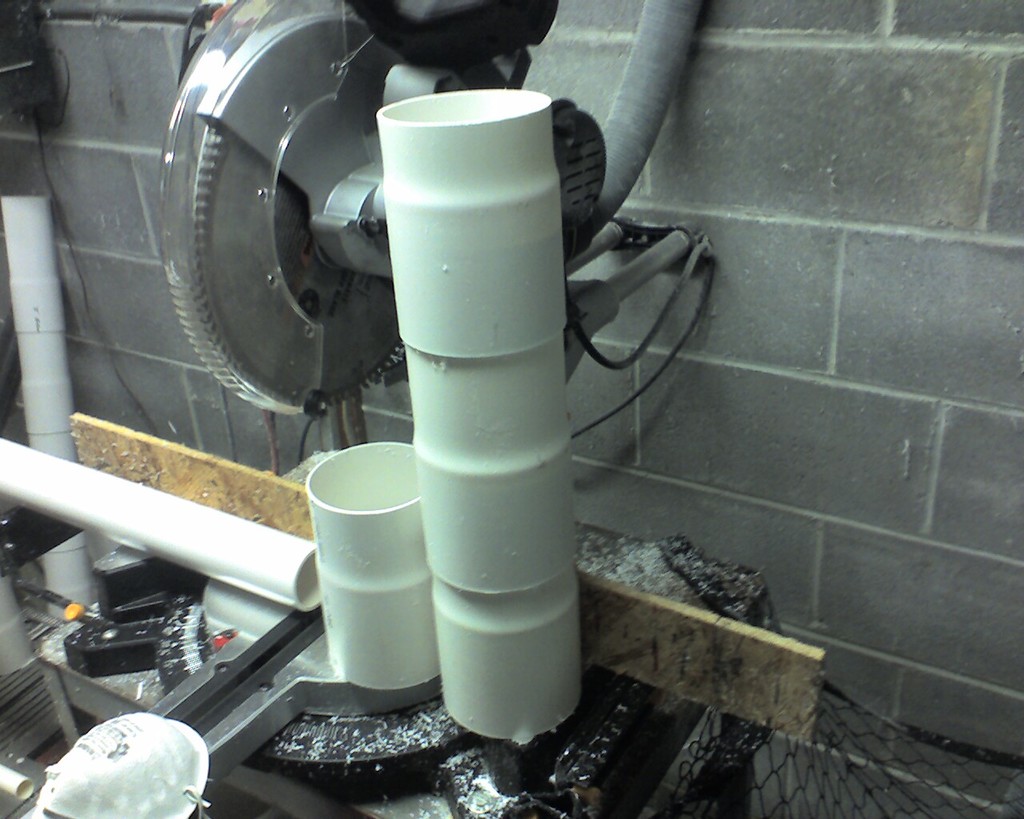 Into these which sit in the corner of the GB under the inflow from the FTs: (the black is the bacteria stream like build-up) 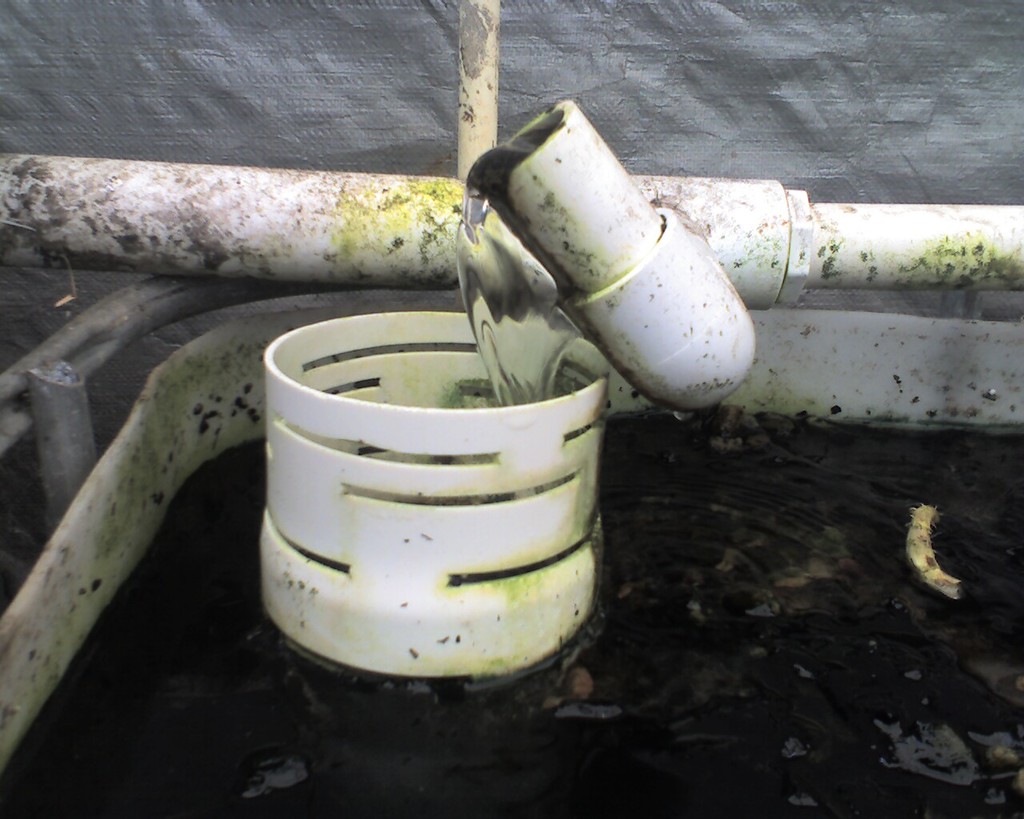 And here btw is the adjustable skimmer T (below) that I refer to. It is easy to dial in just the right level (my FTs are always at the same level) to keep the fresh food in but the older food and oils, out: I don't worry about the little bit of algae on the FTs. The water is very clear. The adjustable dam is a piece of 1 1/2" pipe that is cut to snap over the 1 1/4" T and simply adjusts up or down for just the right skimmer action. Note the rough opening as I manhandled the slot so I would not have to remove the T to open the hole larger as this idea was an afterthought. Trying to get the slot in just the right place was way too hard to accomplish so the adjusters came to mind and now it is so easy.

I don't expect that my grow beds will ever become anaerobic, especially with composting worms.  No problem during the first 2 1/2 years and we'll see.  If you've gardened in the ground, think about when that system could become anaerobic - when it doesn't drain.  Otherwise, it doesn't happen, to my knowledge.

I didn't like the yuck on the bottom of the fish tank either.

I having't ruled out a settling filter/sump.  Should I ever start a deep water culture then I'll probably do more filtering.  Until then, there doesn't seem to be any reason to do it.

Jim, you are amazing and I'm jealous about your trout.

In my system, food uneaten by fish is eaten by composting worms.  I think its working out OK.