i'm new with questions i recently met  a guy that has indoor aquaponics artificial lighting , tolopia, fed comercial food. he gave me tomatoes ,he can,t get them to produce even medium size fruit. The taste was flat no flavor.If thats what can be expected for flavor I'll give up on tomatoes.Any advice? thanks.

If you are going to be doing aquaponics outdoors, I would say don't give up on tomatoes.  You might need to try a few varieties till you find what works well for you and you like.  And remember that the first season of an AP system won't be a glowing example of what it can do with demanding fruiting plants like tomatoes.  That said, many people still do manage to grow toms the first season.  I grew a huge jungle of grape and cherry tomatoes (I don't really like fresh tomatoes but the other half said they were great.)

Maxicrop plus iron will help tomatoes in a new system. It's formulated to support acid-loving plants (tomatoes) and provides iron which is often deficient in both new and mature systems. It will give a mature system a nice boost as well.

Also, tomatoes love direct sun and lots of it.

Tomatoes grow very well in AP systems...maybe too well as they sure hog a lot GB space. I'm growing more in self-watering containers to free up GB space.

I agree with the above. Don't give up. It takes time to build a healthy garden, no matter what technique one uses. Flood and drain grow beds are wonderful to grow tomatoes in (once the system is mature). I have chosen to grow my tomatoes in my raised, wicking bed system, (now fed by Ap water).

Dont give up I started my system last march and now I have a heatwave II tomato that is eating up my greenhouse space!!!!! with lots of tomatoes showing up on it!!! This is a DWT system to boot havent gotten to putting in the media beds yes but do have the gravel for it now. 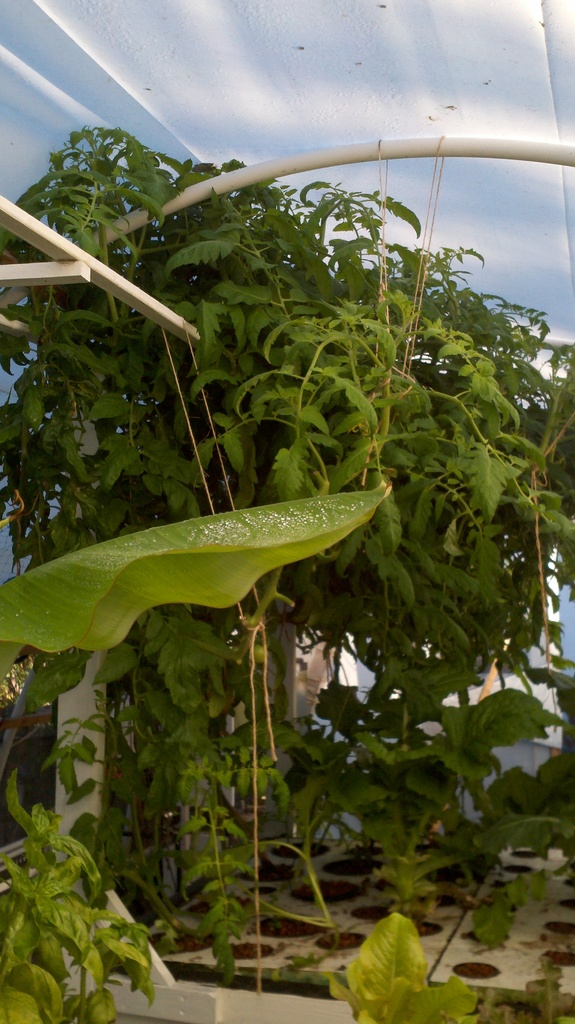 Permalink Reply by Jon Parr on February 7, 2012 at 9:15pm
Heat and sunlight are crucial. I have ripe tomatoes on the vine right now, and they're red, but they're not great. Still better than buying bland tomatoes in the store though. The same plants produced great tomatoes over the summer though.

I'm lazy about the tomatoes in the AP system and don't cut anything. That said, I've got over-ripe tomatoes falling off the vine because we can't eat enough. I'm also trying some new heirloom varieties which keep growing and producing flowers in places I'm not used to, so I just let them go. You could go with the recommendations from the various tomato sites (I think there are several million), if you want to maximize yield, but as I mentioned, you'll probably be giving them away soon either way.

Once again, lots of sun and either a mature system or a newer one with some "tonic" - I used the maxicrop plus iron when my system was maturing.

Since we're talking about tomatoes, I'll share the progress on my most recent plants. I think I previously mentioned I'm growing all of the next round of tomatoes out of the AP system because they hog up a lot of GB space. I've got them mostly in containers, some self-watering. I also wanted to try the upside down planter thing, so I took a few 6 liter water bottles and painted them, cut a large hole in the bottom and a hole large enough for a mature stem in the cap. I took a seedling and placed it through the hole in the caps (I used some plastic sheet inside the cap with an X cut in it to help retain soil), then filled the container from the bottom.

Anyway, these upside down plants have probably 30% more growth than the right side up container plants (same seed and varities, same light, etc) just a month into it. I wanted to try this because this variety grew to nearly 3 meters out of the AP system and I thought it would be more efficient use of space. The silly containers cost less than $3 including the jute for the holder. I think it's a pretty cool way to grow tomatoes.

"I took a few 6 liter water bottles and painted them, cut a large hole in the bottom and a hole large enough for a mature stem in the cap. I took a seedling and placed it through the hole in the caps (I used some plastic sheet inside the cap with an X cut in it to help retain soil), then filled the container from the bottom.

Anyway, these upside down plants have probably 30% more growth than the right side up container plants (same seed and varities, same light, etc) just a month into it."

Well, they won't win a beauty contest, but I think it they'll be functional. I wanted to go bigger but when you try to hang all of the dirt (after watering), then have a large, fruit filled plant, I was thinking I didn't have any supports strong enough to hold the weight so I went smaller and will just have to manage water a little better. These are about 2 weeks after transplanting the seedlings (I've got 3).

I just noticed the ugly little leaf miner marks - my tomatoes don't get hit too badly and these I can treat as they aren't in the AP system. They sure play heck with my cukes though.

We don't have the 2am informercials here where they sell the upside down pots. I've also seen them at Walmart when home visiting, but they're so cheap to make...why spend the money? 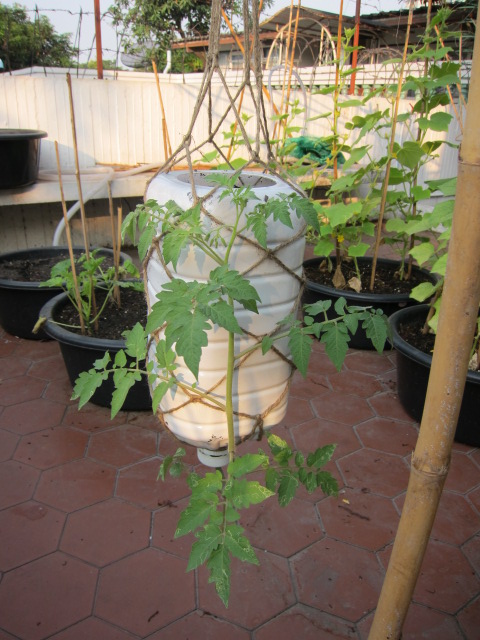 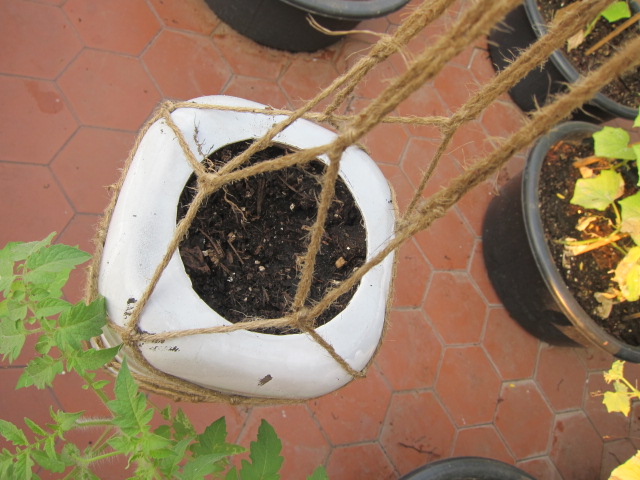 1. My plants have those lines on the leaves (kale, zucchini and tomatoes), I didn't think it was a problem.  Should I be treating them?  They are in my AP system, so I'm not sure what should be done.

2. Why do you figure the plant grows better upside-down? The plant turns up to the sun so it seems like you would need to put some support for the vines.  Do you?  Or do you just let it turn downward with all the weight of the fruit?  I'm just wondering if I make one of those, will I need to make some sort of support system.

Thanks for sharing Chip!

Those lines are from leaf miners - small larvae from a type of fly eating their way through the leaf. There are ways to treat, but if your tomatoes are in an AP system, you will be limited.

As to the plants growing better, the water retention system is good and the use of vertical space in the garden is efficient. I can't say it's a better system, as we're just getting started, but the seedlings seem to be growing a bit faster than those in the containers.

My system sits on an elevated patio and so I have tomatoes hanging vertically out of my GB's now (there was no way to keep supporting them upright) and between the weight of the vine and the fruit, they hang vertically with the leaves turning up to the sun. The pictures I posted shows a young plant which hasn't grown heavy enough to hang down yet. I had seen "upside down" planters advertised and always thought it was a novelty, but maybe I've got too much time on my hands...

Anyway, I've got heirloom cherry tomatoes (Camp Joy) from the US in the containers. They grow well in this climate so we'll see. I thought a cherry variety would make more sense than a heavier beefsteak type.