"Seems to be Flawless" Bell Siphon

I know Bell Siphons can be a touchy subject.  I'm taking some good advice (Thanks TC) and posting a simple change I've made to my Bell Siphon so that others might try it and see if it works for them.  Since I've made this change my siphons have not missed a single start-up or cut-off.  NOT A SINGLE ONE!  I hope this helps those that have had the frustrating problems that I had.  This idea is not mine however, I noticed it on a video posted here but unfortunately have not been able to go back and find it.  To the person who posted that video, Thank You!  My flood and drain this summer has returned to Bell Siphons from heaven!!!

I tried two different things and both of them worked.  The first, removing the tube out of the top of my Bell Siphon. This was a regular sized air hose generally used for an aquarium or air stone. (1/8 inchish)  I replaced it with the same size tube but doubled the length of the tube.   The tube coming out of the top of the Bell Siphon cap on the outside was the same length as before (almost down to the crenelations at the bottom of the siphon) and the other end of the tube was the same length except on the inside of the Bell Siphon.  When I replaced the Bell Siphon back into its normal position over the standpipe in the grow bed I made sure that the now much longer excess tubing on the inside of the siphon dropped directly down into the standpipe. I have checked my siphons probably over a hundred times and they have never missed a beat!

Second, I tried the same thing with a larger airhose, 5/16 inside diameter and had an interesting trial.  My first try was using the larger hose, thus of course more air connected to the Bell Siphon in the normal way.  just inside the top of the siphon cap (about 1/2 inch) and then down the side.  The siphon worked without a hitch.... i.e. more air meaning easier to break the siphon...... until the third cycle.  The siphon would not break on the third cycle.  I immediately took the tubing out and again replaced it with the same size tubing but again doubled the length.  I then replaced the siphon back over the standpipe making sure the extra tubing inside the siphon housing went down into the inside of the standpipe.  AGAIN, PERFECTION!!!  Sometimes it is a little slow to shut off but starts and shuts off everytime without exception.

Here are my system stats: (inside diameter)

3/4 inch standpipe connected at bottom of grow bed to

1 inch pipe extending 2 inches below the grow bed to an elbow.

I have attached two pictures, one with the regular 1/8 inch hose and one with the larger 5/16 inch hose.  Hope this helps someone, it sure helped me.  If someone has a question please feel free to ask.

posting tip.  You don't have to add images as attachments where people have to click on them to see.  You can add them directly into a post if you wish using the image button which is the second button from the left next to the link button.

Now don't be surprised if this sparks quite a debate and don't let it upset you. You are just reporting what worked for you and the fact that it is working should be good enough. But I expect many people will really get into debating WHY it's working. This is also a good thing.

Thanks for starting the thread so people can see and discuss.

Permalink Reply by halemart on October 29, 2011 at 12:42pm
I love this, it gets rid of the need for the adapter in the top of the stand pipe.Working is great!    I now have another design to try out, someone else at the conference posted a design that uses no pipe at all.    Main thing is just get it working.   Thanks for posting this. 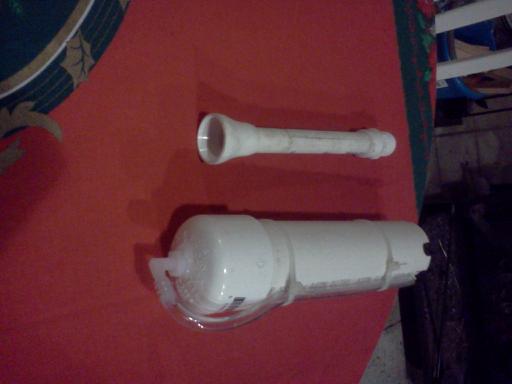 This one is based on the Affnan bell siphon. Works great so far...

Permalink Reply by steve on October 30, 2011 at 8:44pm
Thanks Patrick, I will be going back to siphon world tomorrow and will give this a try. Still have 3 or 4 touchy ones. Would sure be nice to have clear tubes to see what is going on in there. Maybe some rising air bubbles stirring things up in there?? Just to add I found adjusting the level of the horizontal drainpipe helps more than anything else I've done yet.

Permalink Reply by TCLynx on October 30, 2011 at 8:58pm
Beware the clear tubes though, algae forming in them can cause clogging issues for the small tubing and once they are full of algae it is hard to see what's going on anyway.

I just wanted to add a "BIG THANK YOU" to this thread.   I went daring and decided to cut the size of my bell siphon in half, and try this method.

This is in my indoor system that has been very problematic with 1/2 inner diameter pipe and bell over top.     I wanted to get my grow light down closer to the plants so my large bell siphon just was not cutting it.

I am happy to report that I can increase the pump to all the way and it cycles everytime and faster two, there is a sudden blurg sound and it shuts off and cycles right back.

It is a big advantage to have a smaller bell siphon, and faster cycle rates I believe.    My tank is getting cleaner as it is cycling much more often.

Here is my version of a NO FAIL bell siphon.

When you see it work you will understand why it will not fail.

Here is one of the simplest and inexpensive was to make a bell siphon and let me tell you that this works great. You have to choose you plastic bottles wisely because this plastic does not work well and you will notice stress cracks beginning to form.

I am using V8 Fusion bottle for the outside and a STYFO seltzer bottle top for the inside and it has been working flawlessly. Not to mention easy to replace parts when needed.

Attached is the video that inspired me.  http://www.youtube.com/watch?v=oDzcKgWLRf0

Here's something that I use to tune a bell siphon that had a tough time starting...

At the end of the pipe where the water flows back into the tank, add a 90 degree elbow with a short piece of PVC on the exit end. Don't glue it together so the elbow can rotate and you can change the length of the little piece. While tuning the siphon, rotate the elbow a little at a time until you get the best flow and most consistent start. Experiment with various lengths on the exit (mine worked best with about a 1 1/2 inch extension).

Like mentioned in posts above, the angle of the horizontal run makes a big difference. Mine had to be slightly downward and it was  a short run (not flexible). If you warm PVC pipe over a candle, it will become soft, allowing you to bend it. It'll harden and keep the new shape when it cools.

Stopping the siphon was solved with a snorkle as talked about above. I used a plastic bendy straw one of my kids got with their milk shake at a restaurant. It was about 3/8" in diameter. Just drilled a hole in the side of the bell cap and hot glued it in, bent it to 90 degrees and tie-strapped it to the bell.

I think its hard to provide a "perfect" formula for a bell siphon that someone can follow. To anyone building their first siphon I'd stay start with a basic design and tweak it one thing at a time until you get it working.