I saw this article recently and thought that it could be an interesting development for growers.  These are LED replacements for traditional fluorescent tube lighting found in offices worldwide.... but if the technology could be adapted for use with plants then these could make for extremely electricity efficient lighting systems for aquaponics.  The ramifications could be quite exciting!

Lighting company Philips has developed an LED lamp that it describes as "the world's most energy-efficient". 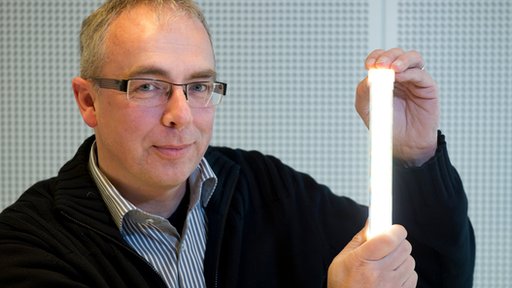 It said the prototype tube lighting LED is twice as efficient as those currently used in offices and industry around the world but offers the same amount of light.  Being able to halve the amount of energy used could bring huge cost and energy savings.  Lighting accounts for more than 19% of global electricity consumption.

The prototype tube lighting produces 200 lumens per watt (200lm/W) compared with 100lm/W for equivalent strip lighting and 15lm/W for traditional light bulbs.  "This is a major breakthrough in LED lighting and will further drive the transformation of the lighting industry," said Rene van Schooten, chief executive of light source and electronics at Philips.

"It's exciting to imagine the massive energy and cost savings it will bring to our planet and customers," he added.  The lamps are intended to replace the fluorescent tube lighting used in offices and industry, which currently account for more than half of the world's total lighting.  In the US, for example, such lighting consumes around 200 terawatts of electricity annually. Swapping to the energy-efficient lamps could save $12bn (£7.8bn) and stop 60 million metric tonnes of carbon dioxide from being released into the atmosphere, according to Philips.

Philips expects the light to go on the market in 2015, initially to replace office lighting.  Ultimately though it is seen as a real alternative to lighting in the home.  The company has not yet published prices but a spokesperson told the BBC that the cost would not be significantly more than current LED tube lights.

The Energy Saving Trust - a UK charity which provides advice on how to cut carbon emissions - said manufacturers' claims always had to be treated with caution, but added that if Philips could bring the product to market it would represent a major advance.

"The typical performance of LEDs we have trialled and tested before has typically been in the range of 50 to 70 lumens per watt which is significantly better than traditional lighting - so if this new Philips product can perform as claimed then it represents a huge leap forward in performance," James Russill, the trust's technical development manager, told the BBC.

"It is also good that this product is aimed at office environments, where lighting is often left on for 24 hours per day - the potential for reducing electricity demand is therefore very high."

This is very exciting, too bad they are only going to be on the market in 2015!

...but we can start saving up for our solar panels before then!

That is a very good point!

I hope that by 2015 we have better energy storage so that efficiency doesn't matter nearly as much because we can just overstock on solar panels.

I'm more interested in graphene development.  Imagine a battery that once it had been used up, you could throw it into your worm bin for composting.  That's a possibility with this supercapacitor.