Anybody have a sense for Friendly Aquaponics?

Do you know anyone who's taken their classes, or bought a system from them?

How do they compare to Nelson & Pade?

Their system designs look impressive, though their website isn't all that professional.

I'm looking into partnering with someone on the commercial side of things and curious about their reputation.

I glanced at Friendly Aquaponics Newsletter briefly and found that the owners are having to do some jail time.  The wife first and then the husband after.  I believe there was something said about growing Pot, but it wasn't their fault.  I would say this would not take away from their knowledge.  I'm sure others will have something to say about this.

Yikes. One would have thought they would have spent an hour or two with a lawyer before deciding to grow pot. I know the aquaponics source spent a lot of time with lawyers and city officials before they started offering their aquaponic pot classes.

I always get their newsletter and browse through it when I have time.  When I got the latest one and it started with these words "This is the fourth in a series of Susanne's news from prison."  I was kind of freaked out.  It sounds like just a poor decision as the pot laws are so messed up now.  You all will have to read the newsletters and make of it what you will.

You'd have to ask them to get the whole story. I heard that they got conflicting information from different sources about whether it was tolerated in Hawaii.

Anyhow, I've been researching them for a while, and found out a few things.  They have been around a long time (1997) and been more free with information about how to design a commercial system than anyone else.  Their systems use very few fish, and no filtration.  This probably makes sense if you're losing money on fish anyhow.  They're trying to design systems these days for use in cold climates.  I'm impressed with their greenhouse, though I don't know if it's worked out for the farmers.

You are right they have been very transparent with their situation and have given information and plans out for free.  I don't like to participate in bashing and try to stick to the facts.  The fact is like others that try to go commercial they have failed.  From what I can tell friendly has had many bad reviews from people who have gone to Hawaii to take their class, they have openly stated they have taken on large debt and failed commercially.  I think without that debt they would have made it.  They have had to rely on teaching $$ and now for some reason are in prison.  Just sounds like poor business decisions.  It is for those reasons I haven't recommended them or purchased anything from them.  We can learn from these mistakes and help move forward with aquaponics.  I think it can be viable commercially, but something has to change in regards to space and input requirements.  There are a few ideas in the works and I'm experimenting with one of them.  I hope it works.

Both Nelson and Pade are and Friendly are based on the work of Dr James Rakocy who has been very open with his designs.  I have met all of the people we are discussing here and in my opinion there are 3 people who know what they are talking about and they are all scientists. Dr Rakocy, Dr Wilson Lennard and Dr Nate Story. Get yourself to the next workshop with one of these guys and you will be on your way to learing what you need to know. Dr. Story is the only one with a commercial operation and he is innovating with vertical technology. Hope that helps.

I've been to workshops with Mr. Story, and while he's very good at promoting his product, I didn't learn a darn thing.

I have not known of Dr James Rakocy and his followers. When I started I found much information on this site and also from Friendly Aquaponics, at least they admit their mistakes. And for me that says a lot. There is a wealth of information if you set and read all of their newsletters. I for one, appreciate their information and all that I find here.

I was referring to those participating in training frequently. Vlad and Rob know their stuff for sure and Dr. Savidov has done further research on Rakocy's designs, but I am not aware of him teaching in the states. And by 'know what they are talking about' I mean they have actual research and commercial production experience behind what they are teaching. Although their training is basic, Nelson and Pade are in the business of selling systems and helping people launch farms, so by all means if you want your hand held all the way they can help.

There are few profitable commercial AP farms out there, farming is a tough business. There is no way to teach your exact market and climate and like any business you have to go all in and keep the petal to the metal to be successful.  I want to have a farm but there are so many challenges with climate and regulations in NYC that it would be very hard to make it all work.

While I normally avoid commenting on other aquaponics businesses, I'd like to add a few more facts to David's list.  First, they were arrested not only for growing cannabis, but also for having a sizable stash of illegal firearms in their home Second, I wouldn't give them too much credit for being transparent about their situation.  They had two choices - try to hide it, which would have been impossible (they are smarter than that), or actively get out in front of it, as they have done.  I think it was the right decision for their business.

As for the Aquaponic Source MMJ classes, Scott is right.  We consulted with an attorney who specializes in the cannabis industry in Colorado and discovered that teaching, and learning, how to grow cannabis is perfectly legal throughout the U.S.  We do not grow, sell or distribute MJ at our location.  But since this is still so controversial we also took a vote as a ten person company and unanimously agreed that we wanted to teach this class, mainly because we all believe in the medical benefits of marijuana.  We have found that about 80 percent of those who take our class are taking it for that reason.  In fact, I just signed up a guy two days ago who just found out that his wife has breast cancer and he said "I need to know how to do this because I want control over her supply".  We have found that it grows extremely well in AP (we have access to some off-site, legal testing facilities), especially in a Dual Root Zone setup, and we are happy to share these additional benefits of aquaponics through our classes with those who are interested.

Just sign up for their newsletters at Friendly and read the past ones and you will feel like family before you know it. Their MJ problem goes back to when they were very broke and thought they were in the clear to grow it for a local church but they were scammed and it has taken years to get the absolute minimum based upon our arcane MJ laws that are based upon NOTHING MORE than corporate greed during prohibition. Most of us that have a clue know that MJ is God's gift to man and big pharma's bain. Even Suzanne's news letters from jail are endearing, entertaining and educational. Their GH design is nothing less than stunning and is based upon Japanese designs: (this one is in central TN) 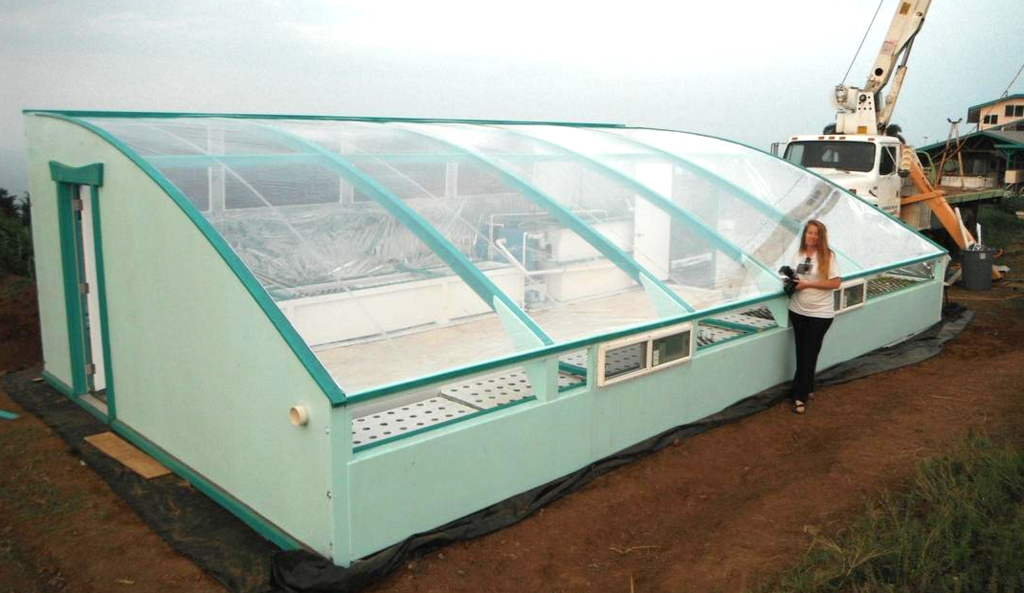 They used to be very active on this forum but I'll let Sylvia comment on that because I have only heard their side of why they were banned on here. As far as their business is concerned IMHO they went way too deep in debt starting out in AP (like 200K?) and yet they have survived and considering what they have gone thru they are doing fine.