At a recent aquaculture seminar hosted by a local Georgia College, they said Azolla was a very good food plant for fish and was prefered to Duck Weed.   I have a sample of it and I have been experimenting with it.   I also noticed it floating in a local pond, so I have a local natural source.

I wanted to see how fast it grows, so I put a few plants in a bucket that had about 1/2 gallon of water and a small piece of horse manuer (a manuer tea if you will).  I forgot about the plant for a week and when I went back it the population had exploded.  The surface of the water was completely covered in a thick blanket of the stuff.   Without the manuer, the growth is very slow.

Manuer seems to present a host of problems an aquaponic system such as e coli and perhaps liver flukes among other really nasty hazards.  I thought this would be a great place to talk about the hazards of using manuer to those that are new to aquaponics.   Manuer is very commonly used in gardens and I can see someone not connecting the dots and do something like grow duck weed or azolla in manuer tea and then feed that to the fish.  What about getting these floating plants from local sources, are there other things to worry about with those.  How do you know when it comes to feed plants that they are safe and clean.

As for azolla, I wonder what other nutrient I can add to the water to get the same kind of growth, that will still allow me to feed it to tilapia.  Any ideas, I will experiment and post the results.  Azolla is used in several countries for green manuer in dirt gardening.  Growing azolla in manuer tea might just have an application for traditional gardening as a source for green manuer.   I am still researching, but it is also used as a water conditioner and purifier.  Will it kill e coli?  So far I have not been able to find that it does.

Now personally, I like all warm blooded animal manure to be well composted before use in my garden (or before use in growing food for my fish.)  So composting the manure before use would be my first recommendation.

There have been some studies that if you dry the duckweed after growing it but before use as fish feed, it will kill e. coli (sorry I don't have links to that so more research should be done before trusting this statement.)

One might also (if doing it for a personal system) age (to allow the urea to convert to ammonia and kill off the e. coli) some urine and do it like pee ponics.

You could use fish waste, or worm tea.

I'm trying to set up a "pond". Fish, media and duckweed all in one bin. I'm still getting my tanks cycled, but so far so good.

Once I have the big tanks up and the swirl filter seperating the solids, I will try that.  That will be almost like the fish feeding themselves.   I would like to use the fish solids to make tea for my garden as well.   I just started a worm bin, so once that starts producing castings, I will try that and report my findings.

As for azolla, I wonder what other nutrient I can add to the water to get the same kind of growth, that will still allow me to feed it to tilapia.

Hi! You can gather all the solids (tilapia manure) from your tanks. This is all I feed to my duckweeds (which grows much faster than azolla). This way, you eliminate a potential (external) source of e. coli. It works even better if you mineralize the solids first.

While azolla is recommended as green fertilizer, it is duckweed that has been recommended as tilapia feed (up to 50% replacement of commercial feed is ok, according to studies).

I have two different duck weeds.  Can anyone help me identify them?  The real small one multiples like crazy and has almost no root.  The larger one is fast to reproduce but not like the small one and it has roots that are generally about 1/2" and can be as long as 2" 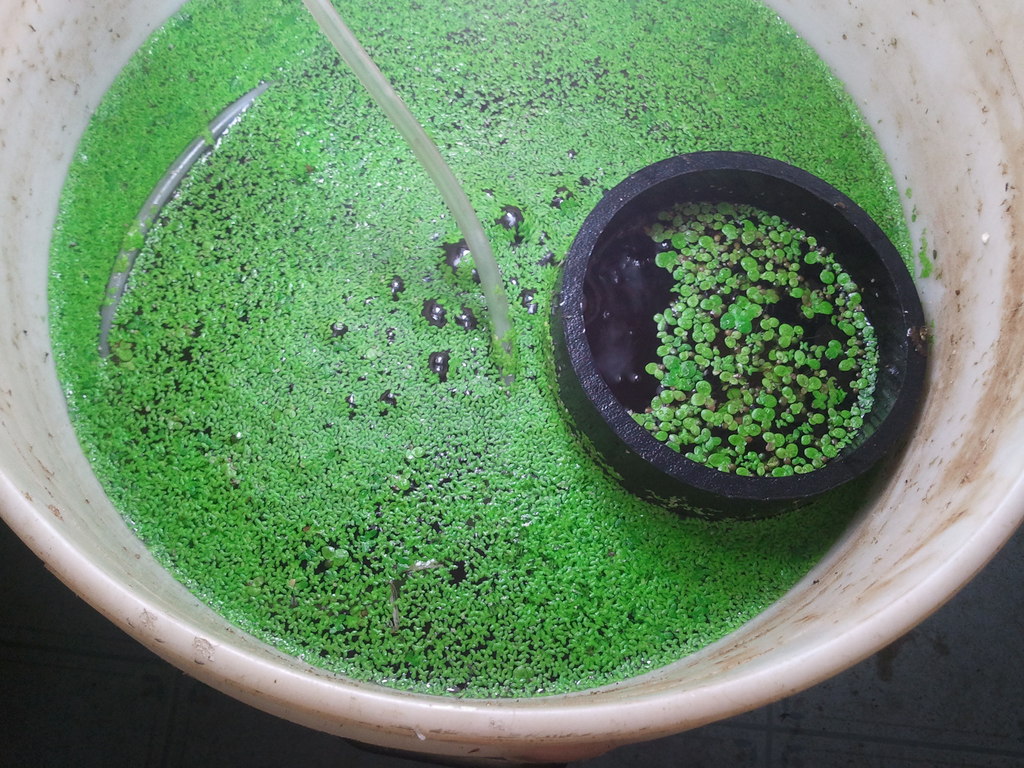 Cant tell for sure about the "small ones", but I have experienced that the duckweed periodically "shrinks" and grows back. So it is possible that they are both duckweed (lemna minor). do your tilapia treat them differently?

FYI, I also have large duckweeds, but they grow to about an inch wide (per leaf), and my tilapia refuse to eat them. I sell them to the pet shop as floating plants.

I've had the larger one for many years, the small one is from a guy who got his start about 2 years ago.  He does not live by me and has been difficult to get a hold of, but he told me the name of it when I got it from him.   I'd like to ID it so that I could find more information about it.   I see the larger one everywhere but the small one is kinda rare.

If you ever get a chance to pick up the small one I highly suggest doing it.  The fish like it better, and it grows way faster.

The small one has a root of about 3/16",  There are generally three leaves each about 1/16" long. They are long not round

Well I've been calling sporadically for a few weeks,and finally with tenacity I made contact today.

He says it Azolla.  But it does not look like any Azolla I have seen on the internet.

Maybe it is a species I have not found a picture of.  I will admit Azolla has some similarity, but I have still not found anything that looks quite like this.  I wish I could show you a better picture, but that first example is about as good as my camera (phone) gets.

Anyhow I like it, and will continue to propagate it.  He did say that it will winter better than the standard duck weed.  I believe it.  This stuff would be a plague if it ever got out of control.  But I feed more and more to my fish everyday and they leave nothing behind.

Thanks for your help, I guess I'll just call it Azolla and quit being so exact.

i wonder what the dry weight difference would be between the two? It seems the small ones would make better algae (gel based/ semi wet) pellets as it takes up less volume, while the large ones maybe more suitable for drying and turning into hard/ dry pellets.

Darn, I looked to see where you are located, thinking that I would send you a start, but China is a bit too far.  I doubt that it would survive.   I'll keep my eyes open for clues to the scientific name, and maybe I will be able to tell you exactly what it is some day.

I grab a handful from this 5 gallon bucket every day and the next day it's grown back.  The larger more common duckweed would be depleted if I did that.

I like your idea of drying it.  I could easily grow this outside in larger ponds and add it to the bulk spirulina you suggested.  I have to find something to mix the spirulina with because it's like dried seaweed powder.  It's impossible to use the way it came to me.  Fry may be able to benefit, but it dissolves into the water very quickly.  I've actually been eating the spirulina in smoothies.    It was intended for the fish

i wonder what the dry weight difference would be between the two? It seems the small ones would make better algae (gel based/ semi wet) pellets as it takes up less volume, while the large ones maybe more suitable for drying and turning into hard/ dry pellets.

I made another effort to ID the small duckweed this morning.  I think you are correct.  I found this picture of lemna minor. 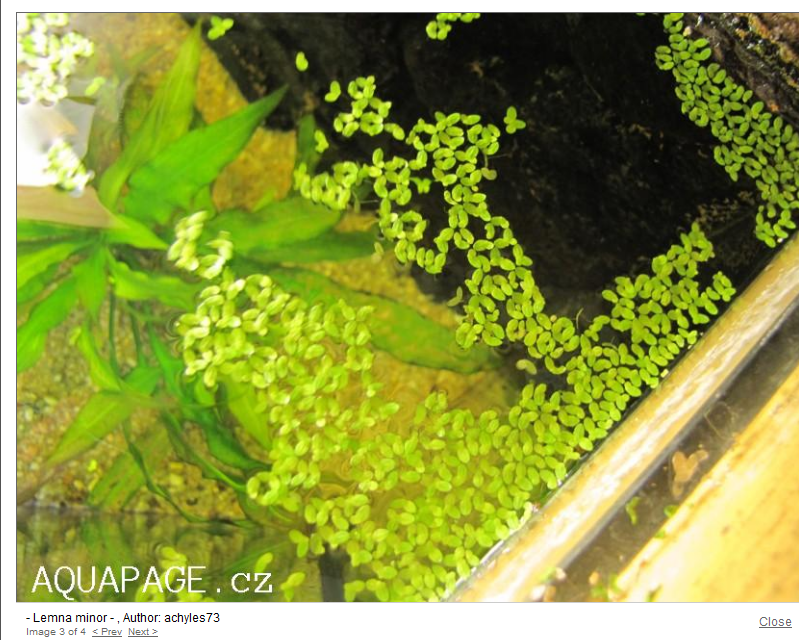 This next image shows what my larger duckweed looks like.  (Giant duckweed).

The difference is not the amount of light as suggested here.  They are definitely two different duckweeds.

Thanks for your help. Cant tell for sure about the "small ones", but I have experienced that the duckweed periodically "shrinks" and grows back. So it is possible that they are both duckweed (lemna minor). do your tilapia treat them differently?

FYI, I also have large duckweeds, but they grow to about an inch wide (per leaf), and my tilapia refuse to eat them. I sell them to the pet shop as floating plants.