DIY Heater, build your own 2000 watt heater for $20 ***DONT USE COPPER OR NICKEL ELEMENTS!

submersible virsion... http://community.theaquaponicsource.com/forum/topics/diy-heater-sub... ...this how-to has the link for the stainless elements.

After many variations, this is the simplest heater I've been able to build. I had to come up with this last year while waiting for my $600 heater to be built and delivered. when it finally arrived, I just left it in the box and continued to use the home built unit.

DO NOT USE THE COPPER ELEMENT FROM HOME DEPOT!  YOU MUST ORDER A STAINLESS STEEEL ELEMENT.   ....This is a 2000 watt element from Home Depot, a 1-1/2" to 1" reducer, a 1-1/2" uniseal, and a fitting with net pots to keep the fish off the element. I found that a heavy duty timer works for a thermostat. I run it for 15 mins on the hour to keep my 150 gallon tank toasty. this would be adjusted according to your needs. i have used this on as much as 600 gallons, but would recommend going to the 240 volt, 4000 watt for anything over 400 gallon. Note - the 2" net pots slip right onto a male threaded 1-1/2" nipple.

The top pipe is optional, i like to keep it as tall as the water level will allow. This will create a convective flow of water across the element. Works great! 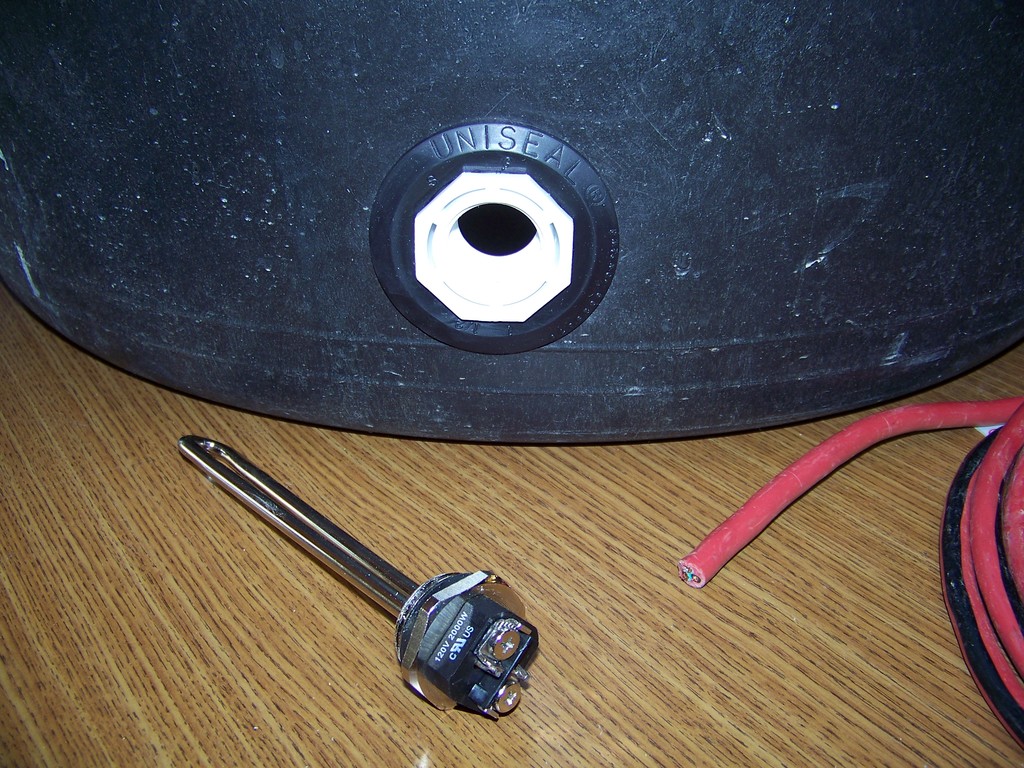 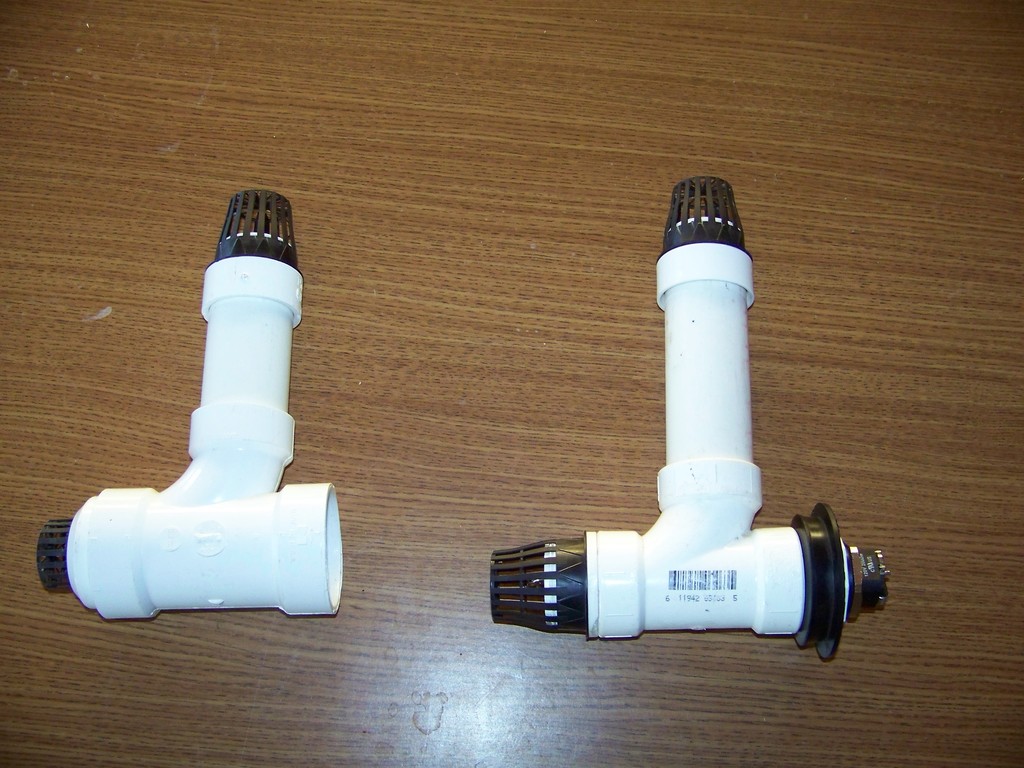 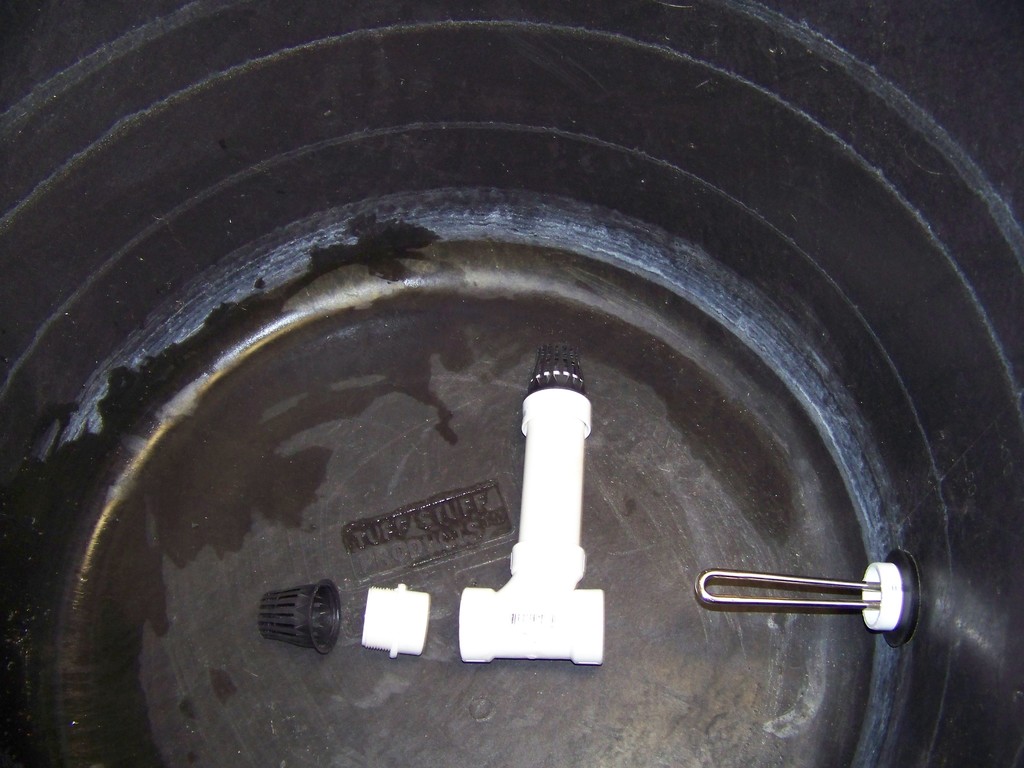 here is the newer version... So if I test my zinc level; what's the level that's going to kill my fish?

I'm on board with removing the best part of my galvanized plumbing, but there are qualities like strength that real pipe offers which I'm relying on, so I'm not willing to remove all of it.   But I am willing to measure my chemistry and share that with you.

I've look about on the internet for this, but all any body says is zinc is going to kill your fish.  Well that's bullshit.  A certain level might kill your fish, but just like you guys are not doing RO because you believe there is a safe level so am I.   We just disagree on the extent to which we eliminate zinc, which is really any body's guess.

I'll buy the kit and tell you what's up with my zinc.  At least you and I will know how much zinc leaches out of 10' of galvanized pipe over nine months and does not kill fish.

I respect all of your opinions.  but the worthless documentation behind the claims is not something I give respect to.

If someone wants to say zinc is lethal then give me a number and some tests documentation.  There is bound to be some trace of zinc in any water supply.  This is why I question so much of the crap I read.  I know I come across as careless, but I keep reading regurgitated minutia that has nothing to back it up.

Bob, the studies and data are endless (starting from about 1925 onwards). You may have to shell out some bucks for some of them (might be well worth the read)...but the above are free...there are many, many, many more. Again, a very well known, well documented and concisely described toxicity mechanism...levels...mitigating circumstances...etc...

Zinc plays a very important biological role and is necessary in "some traces" as you say,...but too much of it really does appear to cause problems. This info isn't really "fringe" or "new"or some 'tree hugging eco wingnuts engaging in junk science fear mongering...It's been studied to death (pun intended) for decades by the aquaculture industry...people who have a vested interest in keeping their fish alive...(since about the turn of the last century...1900's...following the use of copper as an algicide in fish ponds...which often lead to massive fish die off's...which led folks to loose lots of money...which led them to wonder why their fish died...which led them (in the industry) to fund studies...lots and lots and lots of them over the last 100 years or so...

No-one is gonna make you get rid of your pipe Bob. With your particular water parameters, your length of pipe, your gH, your kH, your pH and a host of other things your Zn levels might be fine for now. And again some zinc is gonna be necessary for life to do it's thing...but in a re-circulating, low pH environment it would probably be best for people to avoid adding any extra zinc, copper, nickel to that system.

I have a cousin here who's grandpa smoked for well over 70 years. He died at a ripe old age of 93...in his sleep, peacefully. Seeing and knowing this man while he lived...I still do not believe smoking cigarettes to be utterly harmless for all people in all places, nor would I preach it so. That'd be worse than 'careless'...That'd be just plain silly at this point.

Very cool Jon. That does make intuitive sense. Since in plant biology, the divalent base metal ions are rather antagonistic (with the exception of Fe) toward one another...it sotra makes sense then, this might also be the case in fish/aquatic animal biology...Kind of like the 'nitrite/chloride competitive inhibition' relationship eh?

So on the chemistry side, we have (kH) carbonates and the alkalinity ('high' pH) they bring, along with (gH) magnesium and calcium helping to precipitate things like Cu and Zn out of solution into larger and harmless compounds...While on the biological side of things, we have calcium and magnesium blocking the sites of toxic action. Quite a tandem indeed. (Man, this is such a goddamn cool hobby)!

Hopefully Bob has both hard (gH) alkaline (kH) water to help work things out. Now, I'm going to make a very general statement, one that may not be true in every water column in every situation...but it seems like the scientific consensus is that Zn levels at above 2ppm or so are enough to begin to induce hypoxia in fish...Won't necessarily kill them outright within a few hours or anything, but definitely begins to adversely affect the amount of oxygen that their blood can carry, and only gets worse as levels build up. Again, 'soft' water will make this situation much, much worse...

It might be worth noting that Cu and Zn are like the Batman and Robin...only evil...of common base metal toxicity for aquatic life. They appear to have this synergistic effect. So having a "little bit" of both is worse than having just one one or the other...(Copper being the Batman of course)

But neither seem like something you'd want to purposely introduce to a re-circulating aquacultural system (esp AP where your striving for a plant-low pH) if you can help it.

Here's an "oldie-but-goodie"...I know, I know, I posted this last year when we were discussing this with Mathew F, but it does rather explain thing well (alkalinity copper blablabla)...http://www.isws.illinois.edu/pubdoc/C/ISWSC-131.pdf

Rob, if you mind this sort of stuff/info being here, just say the word and we can move it to a proper thread...

Amen on that, Vlad.

Vlad, you may be right about carbonate hardness specifically reducing the toxicity of zinc and copper, however I have read otherwise. I'm still green at this (malachite pun intended), but I understand that it is the divalent ions (mostly calcium and magnesium) that block the sites. Here is a quote from SRAC, and a damn good read for all interested in AP. Borderline threadjacking here:

not at all Vlad... i think it applies to the heater topic. ...its important information that may deserve its own thread.. thanks for doing all the work.

this is what i love about this forum, so much great info exchange..

i just have to ask,, what time is it where you live?

I'm GMT+1...So when you posted it was about 3:00pm here...but I do this whole Dymaxion-type sleep thing (polyphasic sleep cycle)...so I keep some weird hours at times.

Vlad, thank you for finding real data.  It looks like there is no particular amount of zinc that can be said to be detrimental with so many other factors.

My water is very hard and it may be why I have not lost any fish.  Seriously not one fish has ever died in my care.  They are reproducing and some could even be harvested at just 9 months old.

I'm a little reluctant to spend the money on a test kit which will only be used once, but this whole debate about the use of galvanized pipe has got me curious.  While PVC or PEX is clearly a safe route, there are times when rigid strength are required and plastic fails to deliver. So I'd like to know how much zinc has actually leached into my water.

There are quite a few variables which affect the toxic levels of zinc, and some of these were not addressed in the research Vlad provided.   For example once the initial layer of zinc is leached from the pipe it may not continue to dissolve and further.  There could be a patina that would build up and prevent any further leaching.  Also how much zinc is being taken up by the plants?  Papyrus is used for this very purpose in water treatment.

But I really like Rob's design and I have already removed the majority of galvanized pipe.  It only makes sense since Rob has provided an easy alternative.

@Rob - The use of a compression fitting for a water tight connection around the wire is genius! And the slots in your shield pipe are so well done.   Did you purchase this or make it?

@Rob - I built my heater today, but could not find a way to get the wire through one of those Quick Connect fittings.  I finally defaulted to a standard 1/2" water proof connector made of metal.   I'd be interested in specific part numbers and descriptions of how you made the Quick Connect work.. 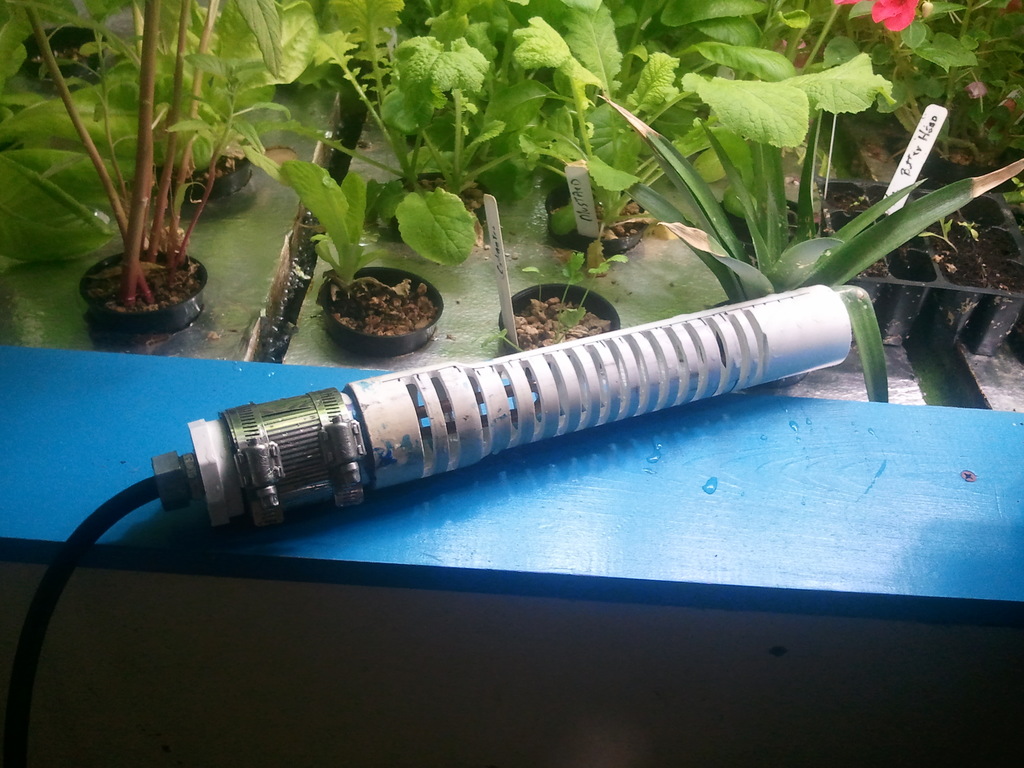 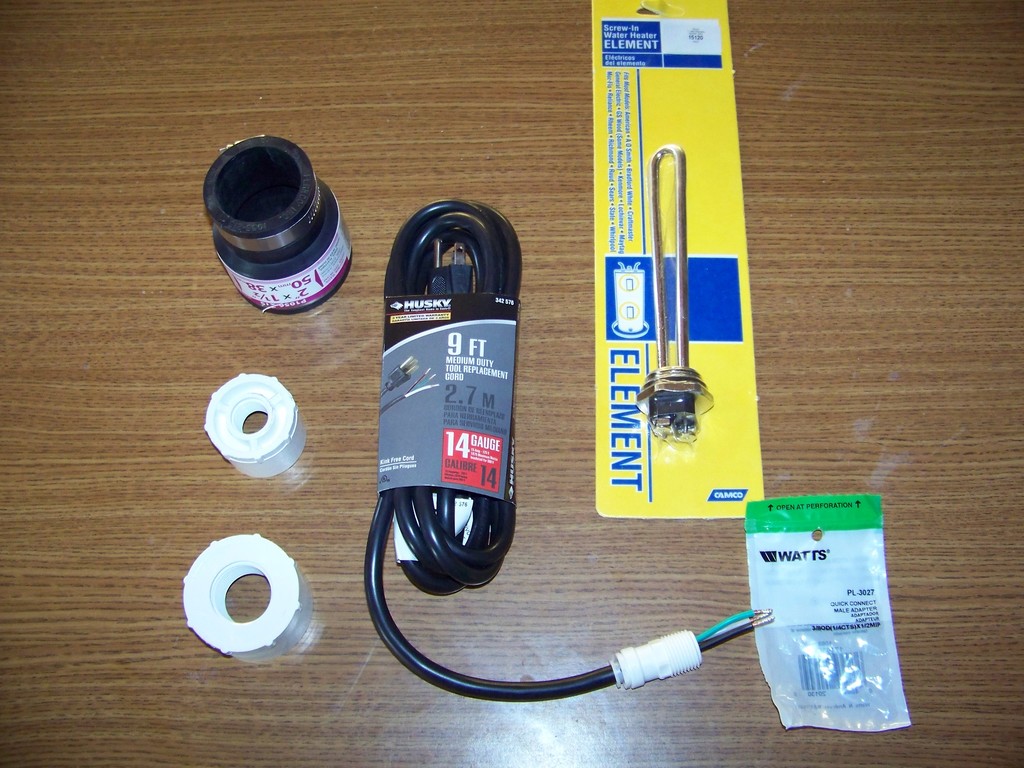 The amps these heaters pull really maxs out the wiring.  My outlet shows signs of over heating where it was plugged in, so I wanted to stay with 12ga. and my even avoid the outlet all together and hard wire it into a switched circuit..

I too think this tiny bit of metal will be fine.  Besides I only used my heater for a few hours each week last year.  I can remove the heater from the water when it's not needed.

By the way my heater element originally looked silver like yours. Since I installed it 9 months ago I have not looked at it, but when I pulled it out I saw signs of copper under the plating.   I'll look into a real stainless steel element.

I found this one that says stainless, but then they go on to say the sheath is made of Incology which I have no idea about.

And I found this one at Menards, but they are not mail order and not around here.

Here is what I found out about the Incoloy type water heater elements. You can purchase them online here also.

"What does incoloy mean?"
A. Incoloy is a type of extra high-grade stainless steel that helps extend the life of the element, resists burnout and the effects of sand or lime over time. For these elements, incoloy pertains to the element coil, not the threaded base of the elements. The extra low density heating elements are made of incoloy. The normal low density and the high density elements are non-incoloy. Non-incoloy element coils are copper on the inside with a nickel plating on the outside. The threaded bases on all of these elements, including the incoloy, are made of zinc-plated carbon steel.