Permalink Reply by Kobus Jooste on April 21, 2011 at 12:08pm
From what you describe and what I have done in my system, I would expect the problem to lie with your inflow rate.  I have four beds with identical hawaii-type bell siphons.  Three out of four kicked in and out correctly, but one is extremely finnicky.  I have taken a lot of time to fine-tune that one compared to the other ones.  If you reduce the flow rate on yours a bit, do you get issues with it not wanting to start siphoning?  I'd try to get it to the lowest flow-rate that still allows it kicking in comfortably, and see if the siphon breaks at the end.  If this does not work, then I would look at the diameters of the pipes used but I'm sure you would be able to find its "sweet spot" with a bit of tinkering.  Adapting to top of the stand-pipe to the Afnan design may also help increase the flow rates over which the siphons will work.

Barrels cut the long way can make fine tuning siphons kinda tricky since there is the variable volume with depth so it makes it harder to get the siphons to kick in and still shut off properly.

I would probably go to the Affnan mod to the siphon for a barrel cut the long way.

"The drain pipe had to be bushed down to 1/2'' for a section after the 90 and then bushed back up to 1'' for the second 90 that drains the water into the fish tank."

Permalink Reply by Mike Konshak on April 21, 2011 at 7:52pm
In my brief experience with experimenting with auto-siphons during the week, I have to agree with Gary the going from a larger down tube to a smaller restriction then back up is slowing the flow because of the restriction. The drain needs to be wide open so there is no impedance beyond the opening of the siphon itself. My simple loop siphon had difficulty shutting off until I cut the flow from my 550 gph pump in half. If its 1" pvc make it all 1 " pvc to minimize pressure drops

Well, I went with the 1'' Drain because those were the parts I had available.  Based on the Hawaii research 3/4'' or 1/2'' would have been ideal for the volume of the half barrels.  The siphon would not start with just the 1'' so I bushed in a 1/2 for backflow.

I am going to try to cut the 1/2'' section down a bit to help reduce this problem.  Slowing down the inflow also has helped.  Any other thoughts?

Permalink Reply by Josh Metten on April 21, 2011 at 9:35pm
Some very choice words have been uttered over the last few weeks of heads being banged against walls.  Thanks for the advice Garrison.

Permalink Reply by David Waite on April 21, 2011 at 9:39pm
Josh the above guys are right. Your drain must be all the same size. 1 inch is perfect. You can easily adjust the  siphon not shutting off by decreasing your flow into the tank. You adjust the siphon starting buy turning the drain elbow up a bit. dont glue your drain until it runs smooth and then just some silicone on the outside in case you need to adjust later.

If you insist on reducing the drain to 1/2", try it on the last vertical entering the FT not in the horizontal position. If that doesn't work for the inflow rate you're using the you may have to remove and replace with the original 1" size. David also has a great suggestion with manipulating the angle to increase/decrease flow.

A 1/2 pipe has a cross sectional area of 0.196" sq.in. A 1 inch pipe has a cross section of 0.785 sq.in which is 4 times greater that the 1/2 pipe, which means it can handle 4 times the volume of water and as long as it is not restricted, and, for any given pressure, the velocity or rate of flow will be higher has well. This is why the drain phase is about 1/4 the amount of time of the fill phase. A siphon will only break if the outflow exceeds the inflow, and since you have a 1/2" pipe from the pump and a 1/2" pipe in the drain, the flows match once the siphon starts. Every elbow and fitting in the stream of the fluid and any unnecessary length in the pipe reduces siphon pressure.

I'm new to this subject and this forum, but not to applied engineering. I'm wondering why there is a need for the snorkel? None of the auto-siphons I've played with require it. Its a new one to me. In the picture below is a simple loop siphon that is turning on and off like clockwork, all made with just 1" PVC and related fittings (a standard slip elbow and a street elbow forms the loop). The intake of the siphon is 5/16 (8mm) off the floor of the grow bed. An inverted  9" square grow pot acts as the sieve to keep the media away. Try this with your existing setup. It should be easy to modify, but keep the drain all 1" (or larger once you are below the bottom of the grow bed). BTW you can mount this type of siphon on the wall of the grow bed (through a bulkhead fitting at your desired water height), without having to cut a hole in the bottom. 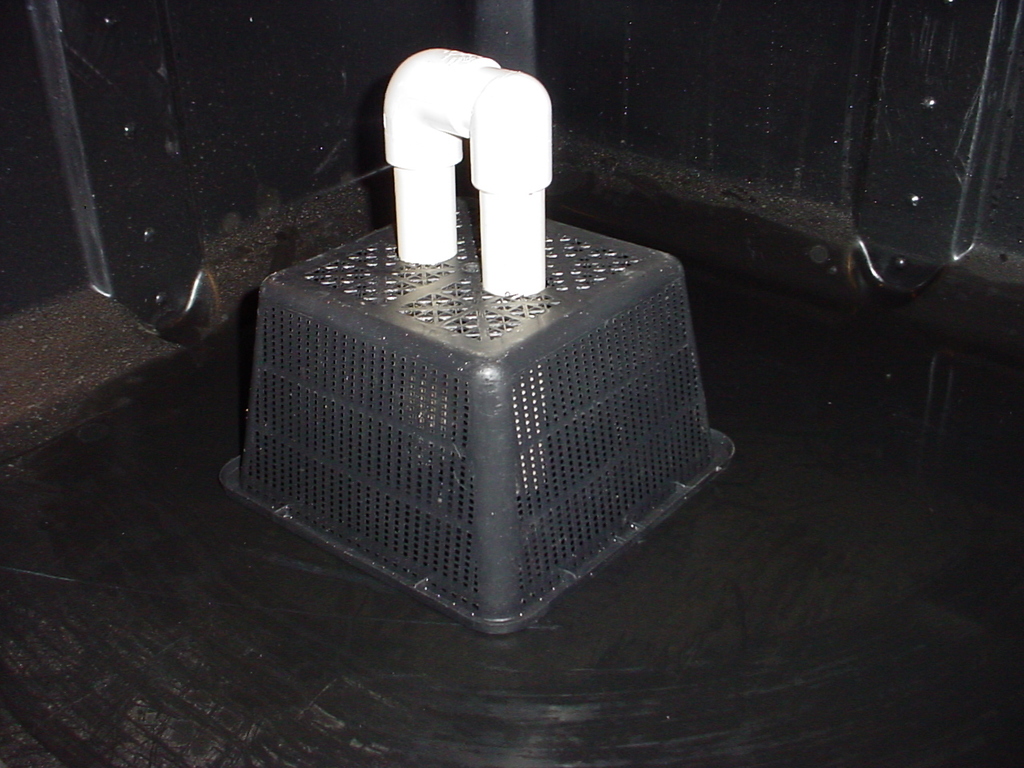 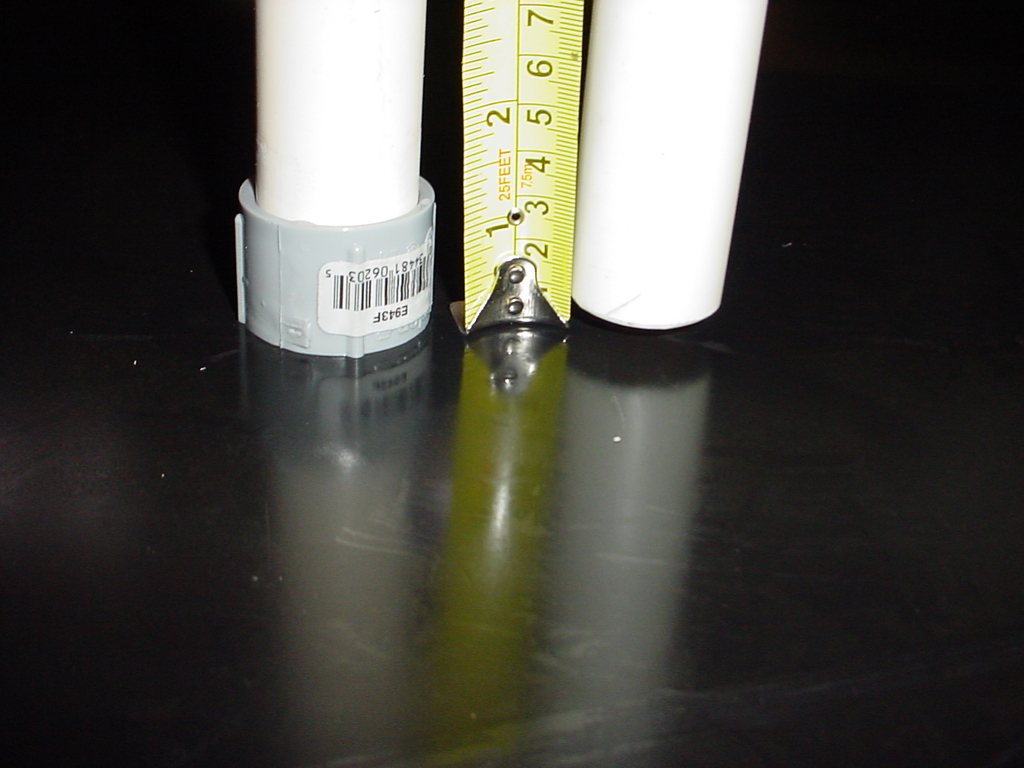 Permalink Reply by Harold Sukhbir on April 22, 2011 at 10:24pm
Hi Mike,
Get you with the snorkel. My first siphon was this same design and i had problems with having to adjust the inflow precisely enough for it to break consistently. Then i came across another design which was simpler to make and worked well for a wide range of inflows. Here
http://www.youtube.com/watch?v=WzZzjK7aFrA

I went with this design instead of the internal/external loop siphon as it allows easy cleaning should we get bioslime/gunk build up. It also maximizes grow space and less likely for media to clog up the works and cause overflow.

Permalink Reply by Kobus Jooste on April 23, 2011 at 12:47am
Josh - that is one nifty siphon you have there.  I'm going to try it in some of the new beds I make in the future.  I think people go with what they see - unless it is on a topic they know something about.  Look for design, follow design.  You obviously have the engineering background to modify what you see.