I've got a small aquaponics system that I'll looking to expand and redesign.  I used SketchUp to assist me with the new layout.  I've attached a few screenshots to help with understanding the design. I'm hoping others can provide their feedback and (hopefully) provide some constructive criticism on how well it will work. 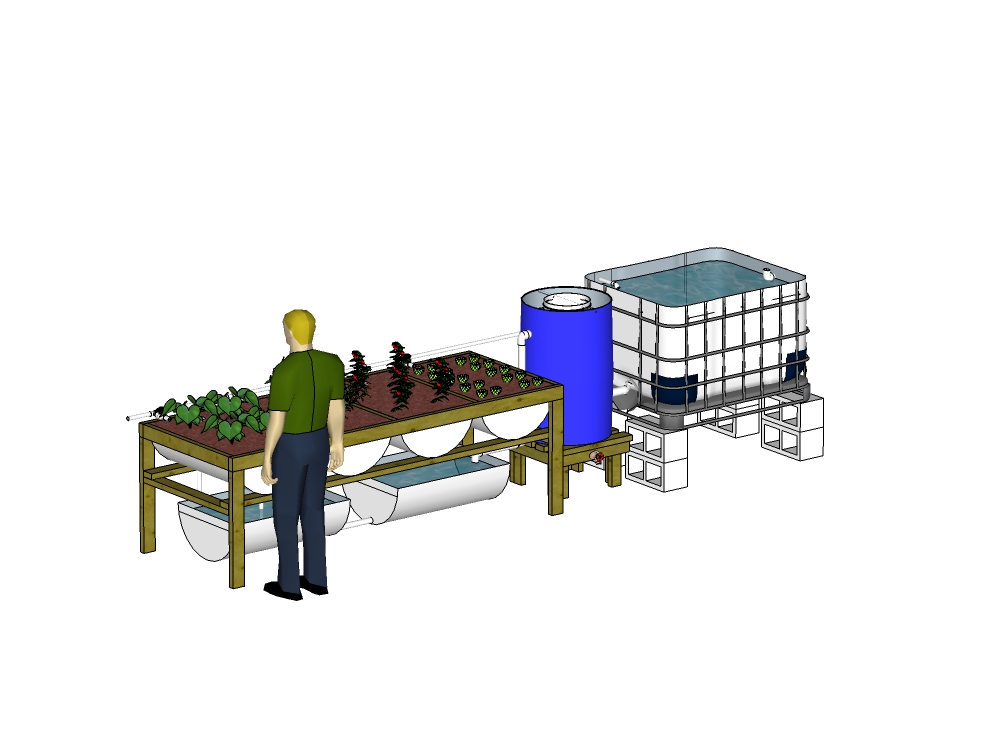 Nice job with the sketchup. I've been using it too but not quite as involved as you have.

First I would not use the IBC tank drain to feed your filter, if that's what you're doing. I did that and wound up re-plumbing it later to a SLO for 3 reasons, 1. cleanout is easier since you have to screen the lower drain 2. small fish such as fry get sucked out to the filter  3. and most important if anything ever goes wrong with the connection you loose all your water.

Looks like you're planning to cut down your IBC and put it on blocks. I would eliminate the blocks and use the whole tank for more water volume. The more water the easier it is to keep it balanced (pH, nutrients, temperature,etc.) and the more fish you can grow..

Your pump should be in your sump and pump to the FT then gravity feed to the filter then the grow beds. The filter needs a conical bottom with a drain to clean out daily. I had to make mine but you can buy them $$$. Not sure what your plan was but it looks like you're pumping from the sump to the grow beds. The GBs should be your final filter before

Make sure you have 30" minimum on each side of your system for ease of working around it. I've learned a lot the hard and would be happy to way share. 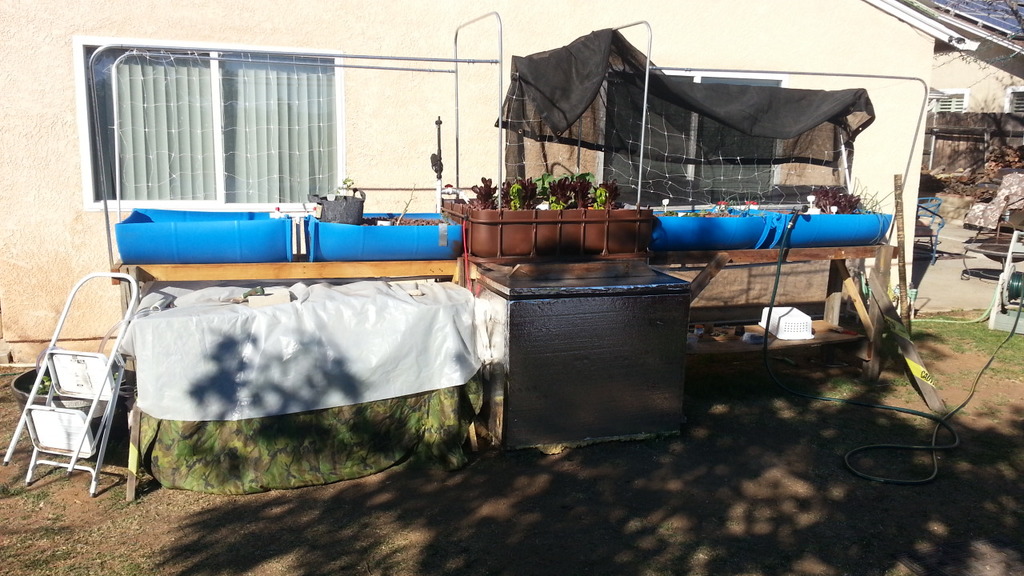 +1 on Georges comments. This is very similar to my first system, only I used the top portion of the IBC for a growbed in addition to the four 1/2 drums.

Also, I think your sump is too small. I used two 55g barrels on their side for a sump with 300g of growbeds and a 200g IBC FT. The 100g sump was both large enough to contain all water from the growbeds when they were completely drained, but also provide excess water to allow for evaporation and still not run the pump dry. I have to keep a close eye on the system and replenish lost water once a week because the 100 gal. sump did not allow much room for error.

Like George, I also recommend you use the entire IBC for a fish tank, but I propose that the filter is not really necessary, especially if you have worms in your growbeds and you are not doing any NFT or raft beds. I have tilapia which produce a LOT of solid waste and my RFF collects a lot of solids. But in my new layout I overflow the FT directly into the GBs, then they drain to the sump. Pump returns clean sump water to the FT.

My larger system is 800g+ FT, pumps directly to GBs, no sump. But I do use post-GB water to feed an 15' long NFT tube, and I plan 2 raft beds downstream from the GBs. So far working well but I don't like the water fluctuation in the FT, so I am planning valves or similar solution to split into 3 + zones.