A quick jig for making towers

There are a great many variations on the theme of hanging towers utilizing 4 inch (110 mm) pipe out there.  Following on a discussion that has been ongoing on the forum, I will add the following:

I have tried a number of different configurations but what has always irritated me a bit is not the lay-out of the tower, but the preparation.  Marking out spacing and straight lines on a long piece of curved plastic can be such a mess.  Cutting and shaping is also not easy as you cannot always fit the larger pipes comfortably into a work bench vice.  You end up holding the pipe with one hand and operating a power tool with the other or something likewise.  I have adapted the tower into a hanging feature for soil planting recently when a friend saw my towers and wanted to sell them in her nursery.  I realised that making many of these will require some rudimentary production line and spent a few days developing a jig in which most of the processes can take place.

In the spirit of sharing, I will present the outcome.  Basically what I made was a box in which the pipe fits snugly, but open enough to allow marking out, cutting and shaping activity.  In the end, I have the box, a length of wood with cut spacing intervals marked out, a cut length and spacing stencil, and the cutting and shaping stuff. 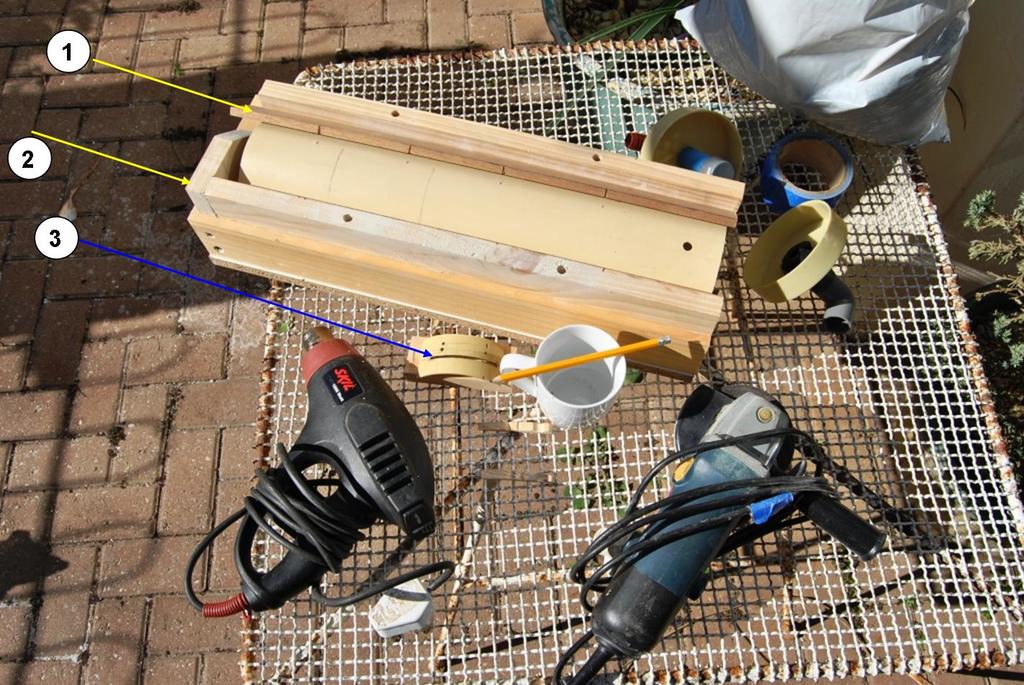 1) The strip of timber with slots indicating spacing for cuts.

3) The stencil (a piece of 4 inch pipe) with a cut slot and spacing holes.

With the correct length pipe section in the jig, the timber strip with the cut spacing is inserted and the spots at which cut marking will start is marked onto the pipe.  The stencil is then placed at the starting points, and the cut lines market out one by one. 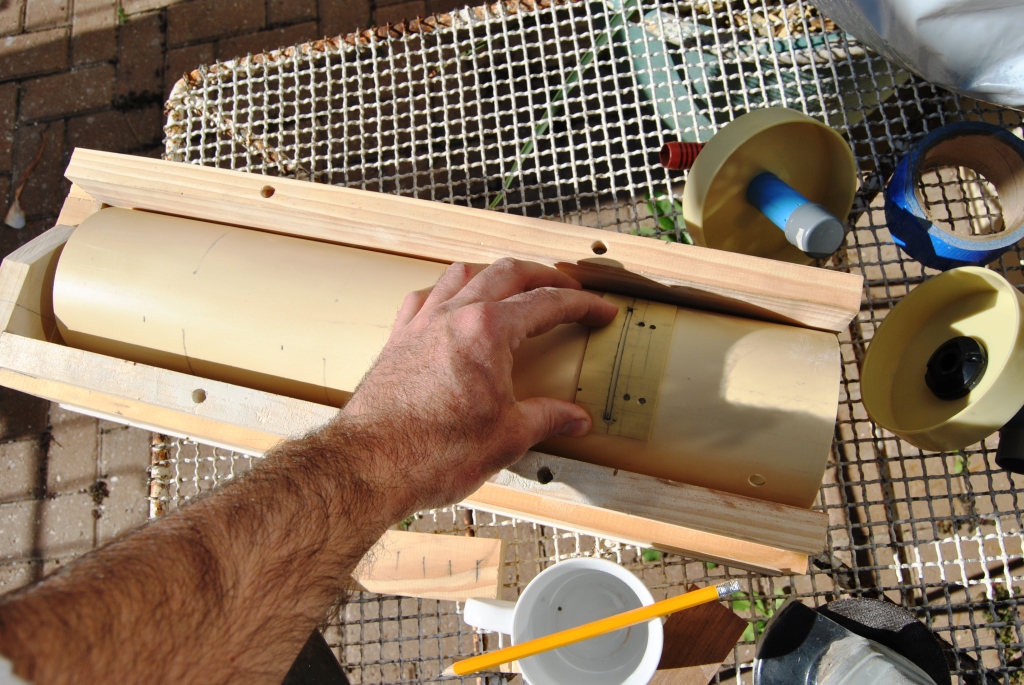 The curve of the stencil fits snugly on the pipe and immediately levels thus there is no fear of going skew.  When 4 cut sIots have been marked out, the two drill holes directly underneath the cut slot is used to mark out the spacing between cuts and then the next set of cuts are marked out.  This stencil is made for three equal cuts per line. I cut with a grinder, heat with a heat gun and shape with a specially selected high tech tool called a ceramic coffee mug.  I prefer the cut made with a grinder (fitted with a thin steel cutting disc) because it leaves a polished cut with no more need for finishing. 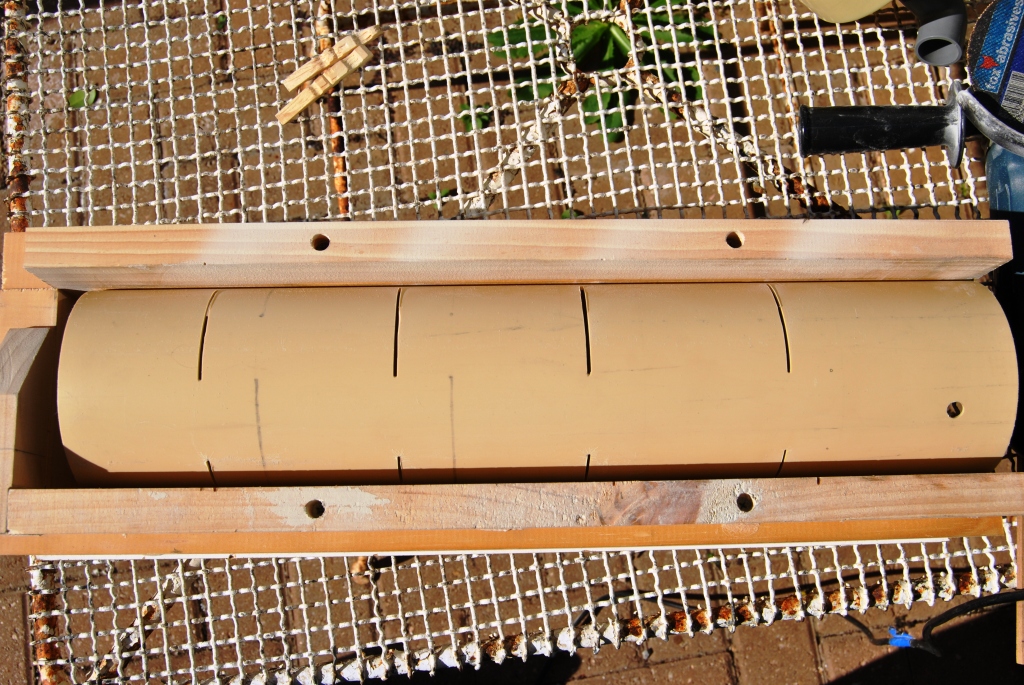 Here all the cut lines have been sliced with the grinder.  Now it is time for the heating and shaping.  My best advice is aim the heat gun only at the area that will be shaped, and only heat to the point of pliability, not a mush of soggy pipe.  A bit of experimentation and you will know where that point is.  Also, with closely spaced cuts, I have found that alternating areas where I heat and shape prevents the pipe from heating up too much. Only the area directly under the mug was heated, and then the mug is gently depressed into the pipe.  Squeeze too hard and the whole pipe may distort. 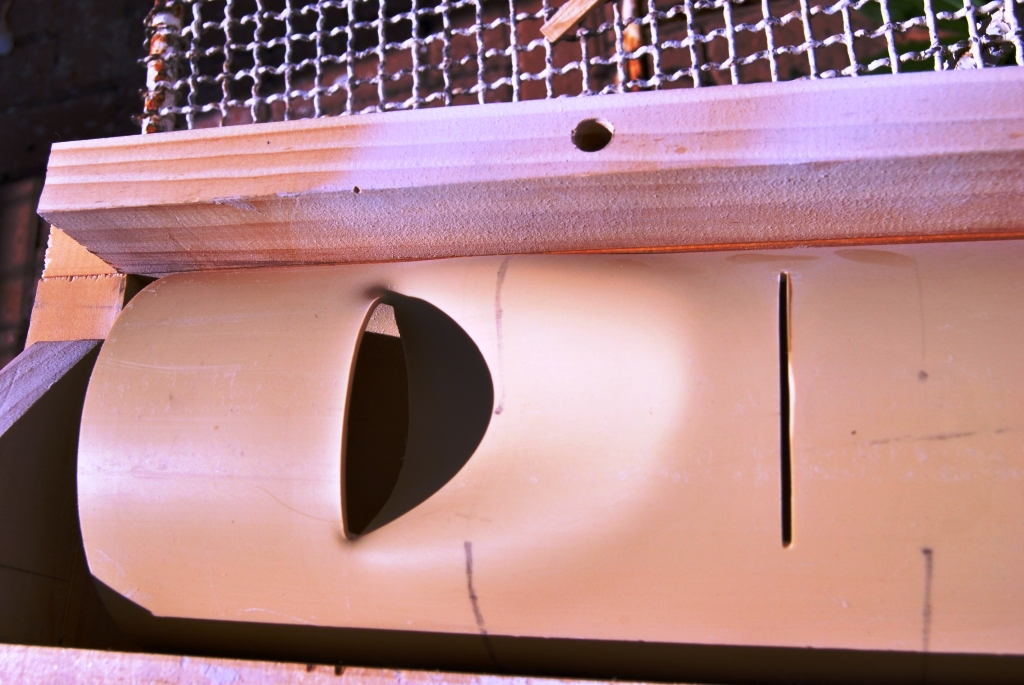 The end result of the effort.  The pipe cools rapidly and you can do the next slot quite soon. 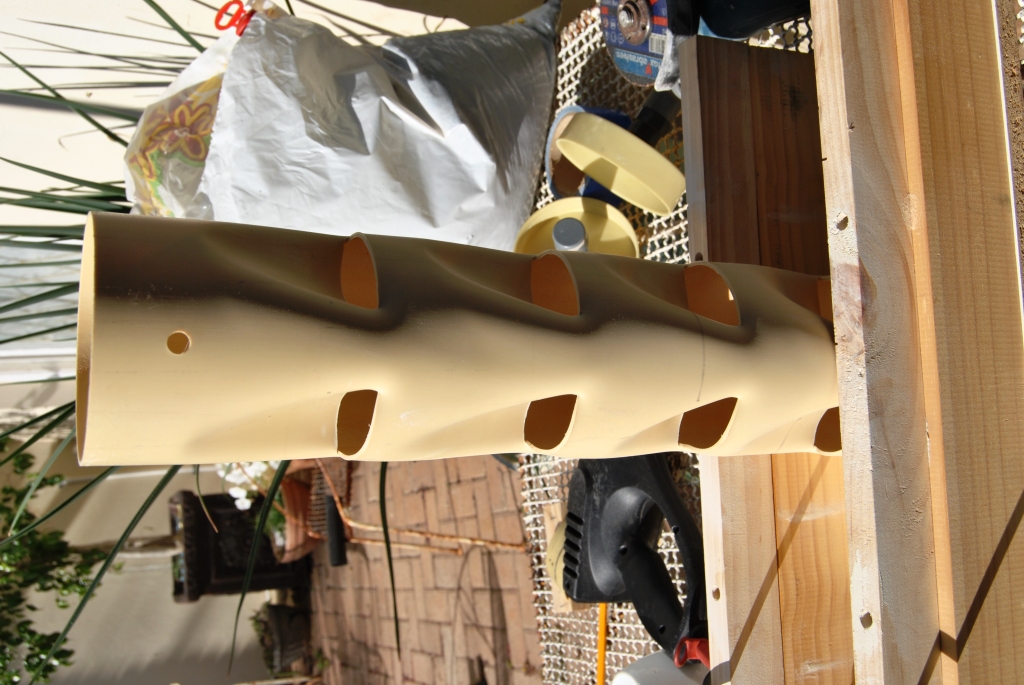 Here, all the depressions are completed.  This is an experimental compact vertical tower to be used against a wall thus there are only two cuts per line, 8 plants per total.  More about this design later.  I'm just hoping it does not root up too fast.

I hope this helps the DIY crowd out there a little bit.